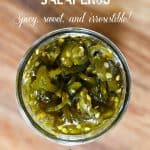 Find out why everyone loves Candied Jalapenos so much, and if you need independent verification, read the many happy reviews in the comment section below the post.

Once upon a time, my friend Katie casually mentioned eating a sandwich made with Candied Jalapeños. She was singing the praises of what she described as an addictive jar of goodies.

Then she said the magic words, “I wish I could figure out how to make these at home.”

By this point, you might know me well enough to know what affect that statement has on me. I quizzed her on the texture, flavor, and appearance of the jalapeno rings. I begged for photographs.

I had her send me a picture of the ingredient list on the label. I asked her to describe the flavor to the very best of her food blogging abilities. She was game. She provided all the information.

After carefully examining close to thirty recipes on Candied Jalapeños, also known as cowboy candy (who KNEW there were so many people candying jalapenos?) I called my local Cooperative Extension office to pick the brain of their home food preservation specialists.

Since jalapeños are a low-acid food, some precautions need to be taken when canning them. You have two choices for safely canning peppers of any kind; you can pressure can them or you can acidify (i.e. add vinegar, lemon juice, etc…) the liquid in which you pack the peck of pickled peppers.

I opted for acidifying the pepper liquid. I wanted to maintain some of the texture of the peppers through the process because pressure canning Candied Jalapeños would turn them to flavorful mush.

The result was gobsmackingly, head-spinningly, brain-addlingly delicious. Sweet, spicy and savory, Candied Jalapeño rings are way too easy to eat on just about everything.

I’ve stashed them in sandwiches, chopped them up on baked beans, tucked them into tacos, used the syrup to brush meat on the grill. You’ll find them perched on top of a cream cheese laden cracker and all sorts of other evil things at our house.

For such a simple thing to can, these pack tons of flavor. You’re going to want to make as many Candied Jalapenos as you possibly can simultaneously.

Because once that first jar is cracked open you’re not going to be able to stop eating them. And I mean that.

I am not kidding with you when I say that I barter with jars of these for valuable goods. Candied Jalapeños have fed my fine pottery addiction because my favourite local potter is as Candied Jalapeño fixated as I am with her pottery.

For those of you who may be freaking out slightly or massively over the idea of canning, rest easy. You do not actually have to can these: you can refrigerate them.

You can follow all of the instructions up to the actual canning portion, then stash the jars of candied jalapenos in the refrigerator for up to three months. You get a year out of canning, but if an alternative is all that stands between you and making them, use your chill chest!

Yes. Yes they are.

On that note, wear gloves when working with the peppers. Not a wimp? Neither am I… but jalapeños have a notoriously wide range of heat on the Scoville scale.

Let’s address slicing the peppers, because we’re going to be going through 3 pounds, folks.The quickest, easiest way to do so is with a slicing blade on a food processor, standing the peppers on their ends in the feed chute.

No food processor? Use a mandolin! No mandolin? Just take your time and slice by hand with a very sharp knife and gloved hands.

I’ve been asked many times whether you should discard the seeds. I don’t because we like them.

Contrary to the old wives’ tales, seeds do not contain the heat of a pepper. The membrane inside the pepper packs the most punch.

Since you’re not removing that, don’t sweat the seeds. Heh. Pepper humour.

Quite a few folks have asked WHEN exactly to start timing the boiling of the peppers. You begin timing them once the liquid has returned to a full rolling boil.

As soon as it reaches a full rolling boil, reduce the heat to a simmer and let it simmer gently (gentle bubbles that blub up) for 4 minutes. To clarify further, you will not be boiling them HARD for 4 minutes, you will bring them to a boil then drop the heat and simmer.

Many, many people have asked me whether they messed up the recipe because their peppers look all shriveled after simmering them in the syrup, packing them in jars, and canning them. The short answer is no.

The long answer is that you’re fine and they WILL look shriveled when you jar them up if you’ve simmered them properly. They will re-plump as they spend those 4 weeks of rest time in the jar between processing and opening.

Yes, I said 4 weeks. My husband has been known to crack a jar at the two week mark out of desperation for candied jalapenos, but he will absolutely agree with me that they improve immensely in flavour and texture when left to mellow for at least 4 weeks after processing.

Try to be patient. You’ll be rewarded.

How to serve candied jalapenos:

On cream cheese and crackers, obviously… On sandwiches, on salads, chopped up in dips, on taco soup, on tortilla soup, on tacos, on pizza…

The sky is the limit. I kind of suspect my husband would eat them on breakfast cereal if he didn’t know I’d wonder about his sanity.

Use these to make Candied Jalapenos:

Food processor with a slicing disc

Are you worried it will be too difficult? I promise it isn’t!

In fact, I have this video to show you just how easy the process is! Check it out! 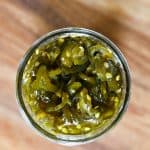 I know this sounds crazy, but double this recipe. People will beg you for jars of this and get surly if you say no. Just. Trust. Me. THIS RECIPE YIELDS BETWEEN 4 AND 6 HALF PINTS.