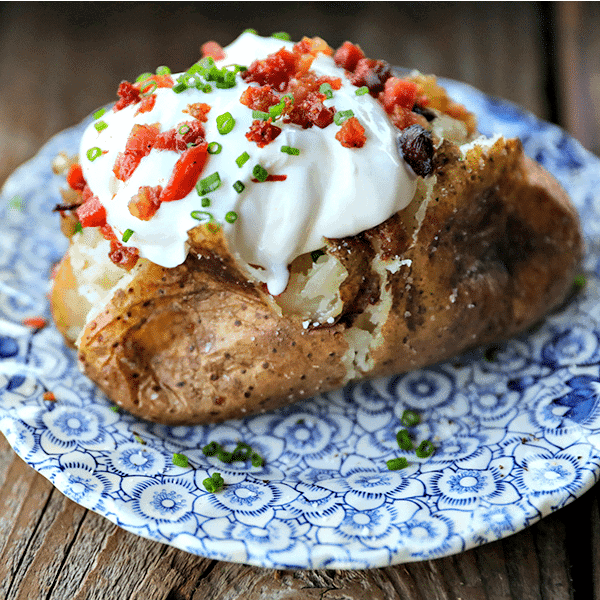 A perfectly cooked Baked Potato is a thing of beauty. Our method for the best way to bake a potato yields a crisp, salty skin with fluffy insides every single time and is absolutely fool proof.

Well, foolproof unless you walk away from the oven and forget your potatoes for two hours. Believe me. I know this.

And I grew up eating potatoes like this. To this day, my dad says that the biggest parenting mistake he ever made was teaching us to eat the potato skins because then he didn’t get to eat as many. 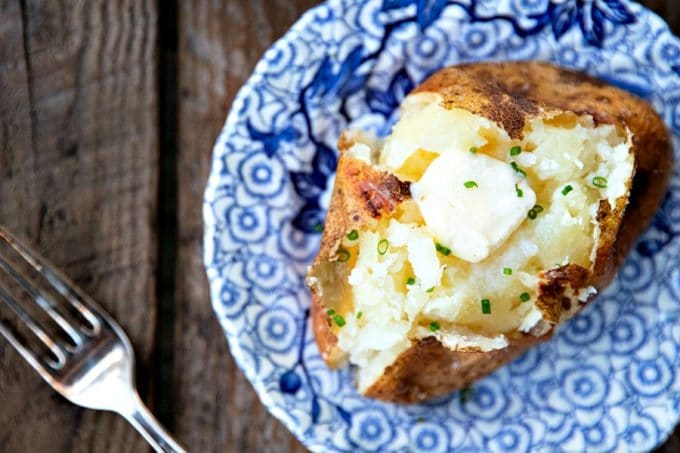 …And there’s just something about a pile of perfectly baked potatoes on a table. Whether you top them simply with butter, salt and pepper, or go great guns and church up those crispy jacketed baked potatoes with butter, sour cream, bacon, chives, and any other thing that dings your chimes.

Baked Potato Bars have long been the go-to party food for family get-togethers. Because you can accommodate any number of food allergies and preferences or aversions.

My son had a few friends over for a bonfire last week and I failed to plan appropriately, so it was a Baked Potato Bar to the rescue! It is a crowd pleaser!

While several pounds of potatoes baked, I packed my counter top with whatever I could find in the refrigerator; crisped pancetta and speck, sour cream, grated Cheddar cheese, smoked salmon, goat cheese, chopped green onions, and various other odds and ends.

Not only was there enough for everyone to eat until they were quite full, there were leftovers. And we were all happy. 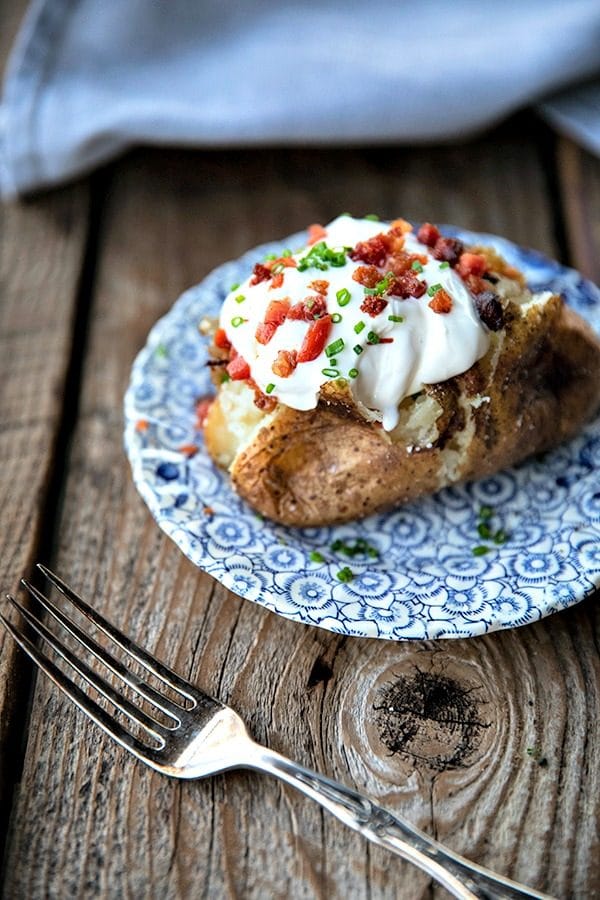 How do I make the best baked potato?

It’s so easy to make a perfect baked potato if you follow a couple of basic rules.

Wash and dry the potatoes. You can towel dry the potatoes, but they need a to be completely dry before you go any further. This will probably require a bit of time to air dry.

That’s okay. Sometimes I will wash them in the morning and let them dry on a cooling rack while I go about my day.

Rub the dry potatoes with a little oil and salt. I usually oil my hands and just rub the potatoes, then sprinkle with salt. 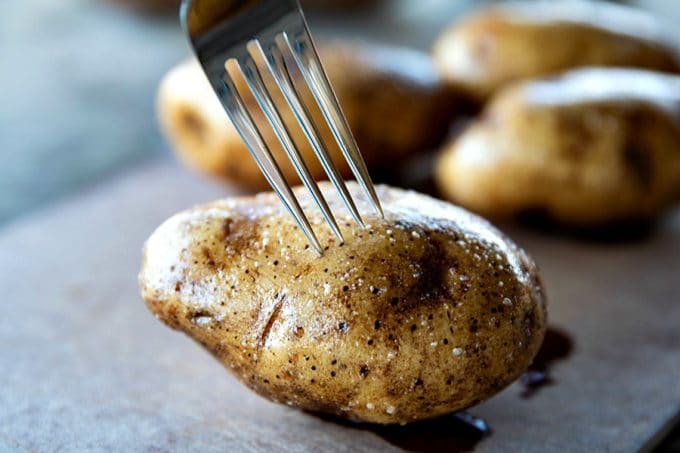 Jab the potatoes with a fork. You don’t have to go fully crazy on them like my son did in the video; just stab them about 8 times all around the potatoes. Make sure the fork really penetrates the potato to about 1/8-inch depth. This allows steam out of the potato as it bakes, but it makes the insides perfect, so it’s important.

Make sure the oven is hot and well-preheated. Don’t try to cheat it and put them in before the oven reaches full temperature. Plopping your taters in a hot oven is one of the keys to making a perfect baked potato.

Bake them directly on the rack. Please. Don’t put them on a pan, or you won’t allow the air to circulate the potatoes to the maximum level and that air circulating is one of the keys to getting a perfect, crisp-jacketed baked potato skin.

What oil do I use for baked potatoes?

There’s a little bit of person preference that comes into play here, but you should choose an oil that does well at high temperatures. Some good choices are grapeseed oil, pure olive oil, canola, vegetable, or peanut oil.

While you can use extra virgin olive oil, it’s likely to smoke a bit at the temperature needed to make your perfect baked potato.

What kind of potatoes for baked potatoes?

In a word, Russets. Russet potatoes are starchy and have a thicker skin.

These are both desirable in a baked potato. The high starch level helps the potato bake up evenly fluffy so all of your lovely butter or sour cream can melt into it. Heaven.

I do not advise using waxy potatoes like white potatoes, golden potatoes, or red potatoes for baking. Their close texture just doesn’t make that same magical transformation that Russet potatoes do. 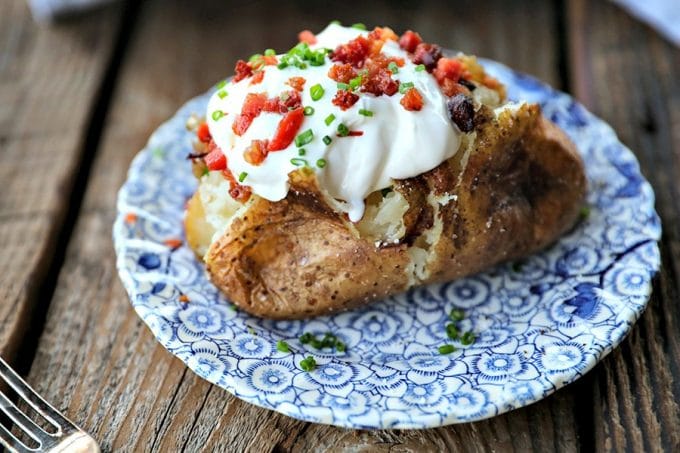 How long to bake a potato?

In short, 425°F yields the very textured potato. It gives you a crisp, roasted, flavourful potato skin, a fluffy interior, and is utterly, absolutely perfect. The high temp prevents the potato from forming a weird thick skin under the skin as the potato bakes.

If you’re concerned about drips, you can put a rimmed pan on the rack below the potatoes, so you don’t deal with anything on the floor of your oven.

Do you have something else you’re already roasting and want to know whether you can change the temperature and still get good results?

You’re in luck! While I prefer my potatoes at the aforementioned 425F, you can adjust your temp to match whatever else you’re already baking or roasting by adjusting your baking time.

Use the same method of preparing the potatoes and this handy guideline for adjusting the time to match your temperatures.

What to do with leftover baked potatoes

The video for this Best Baked Potato recipe is almost entirely a video my son made in a fit of boredom after 3 solid weeks of rain. As it happened, I was working on a recipe for the blog.

He gave me permission to share it because I thought it was hilarious. Watch through to the end, though, where I include the simple hack that will allow you to open your perfect baked potato like they do in steakhouses!

When you wrap your potatoes with foil, you’re basically steaming them by trapping the liquid they give off as they bake. It’s not going to have crispy skin that I love so much.

Can I Bake a Potato in the Microwave?

The super technical answer to that is no. You CAN steam and cook a potato in a microwave, and it may be tasty, but it will never have the same fluffy texture and salty, crispy skin that an oven-baked potato has.

That does not mean it isn’t tasty. It just isn’t the same.

If you want to cook your potato in the microwave:

– Scrub the potatoes and poke with a fork like you do in our oven method.

– Place the potato in a bowl or on a plate and microwave on HIGH for 5 minutes.

– Flip the potato over and microwave an additional 3-5 minutes on HIGH or until tender when gently squeezed.

Use these tools to make your potatoes:

I prefer to jab the potatoes after they’ve been rubbed with oil and salt. I don’t want to seal the little holes I just made with oil.

Don’t rush the process. The potatoes are done when they yield to gentle pressure when squeezed while wearing an oven mitt. Don’t skip the mitt. Trust me on this.

The perfect doneness temp for the interior of the best baked potato is 205°F. If you have an instant read thermometer and don’t trust the squeeze test, you can test your thickest potato.

If you’ve gone to all the trouble of baking the potato in the best way possible, it seems a shame to mangle it open or cut it in half. Here’s a pro tip.

Use a fork to poke an “x” pattern in the potato then squeeze in the way I show at the end of the video on this post. It’s perfect like that, but if you want to fluff it work a fork to make more canyons for your butter to melt in, I won’t judge. 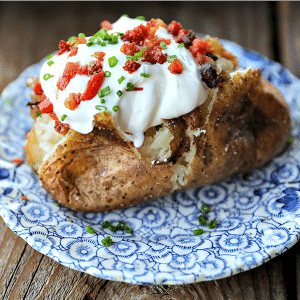 The perfect doneness temp for the interior of the best baked potato is 205°F. If you have an instant read thermometer and don't trust the squeeze test, you can test your thickest potato. 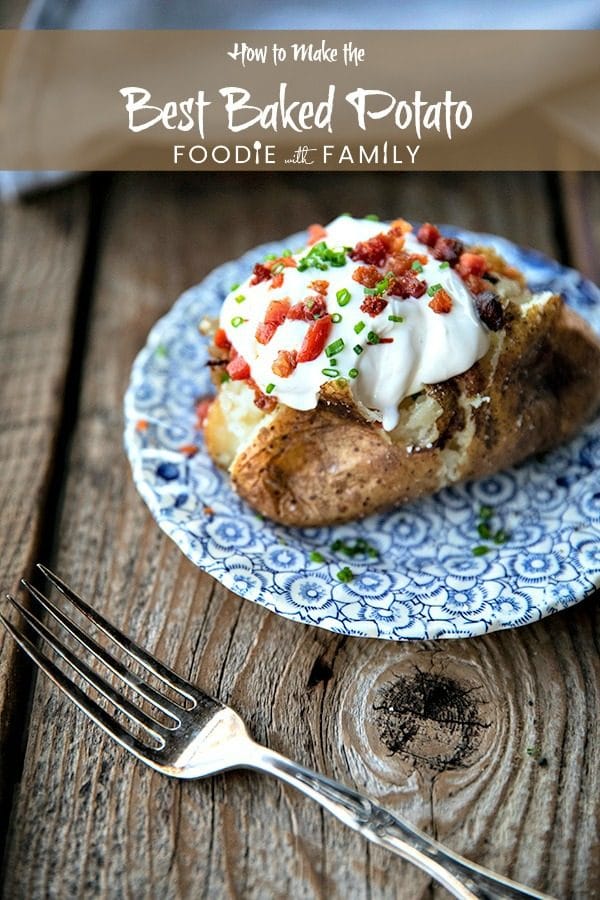 This post was originally published November 2018 and was republished in October 2019 with revised Cook’s Notes and information and in January 2021.