Peposo or Traditional Tuscan Pepper Beef Stew is one of my all time favourite recipes I’ve ever published so I’m bringing it back to you this week. I hope you enjoy it as much as we do!

When I was in Tuscany as a DaVinci Storyteller a couple of years ago, I had a lot of very memorable food related moments. We went to a Michelin starred restaurant, ate at a seriously chic and deservedly popular seafood restaurant, ate a 4-inch thick Florentine style steak, and much more. With all of that, though, my favourite bite of the entire trip came courtesy of the butcher/prosciutto maker’s wife. She served us a lunch she had made us herself on the back terrace of the butcher shop. The scenery? GORGEOUS. The food? So. Darned. Good. Her masterpiece was a Peposo – Peppered Beef Stew. Luscious, velvety, thick, brick red beef gravy with a wine base clung to the perfectly tender bite sized pieces of beef. I was in awe.

It wasn’t my first exposure to Peposo – Peppered Beef Stew, having read about it in “Heat:An Amateur’s Adventures as Kitchen Slave, Line Cook, Pasta-Maker, and Apprentice to a Dante-Quoting Butcher in Tuscany“. I love that Bill Buford made an unapologetically wordy title. I feel ya, man. Side note: If you’re looking for a perfect book for a food loving friend for holiday gift giving, look no further than the title I just shared. When I got to the end of “Heat” I felt absolutely compelled to make the Peposo as he described it. A bottle of wine, a cheap cut of beef, salt, and pepper, overnight in the oven… I made it as described, and while it was good, it wasn’t anything we all felt moved to have over and over. It was a little thin when it came to sauce and it was overwhelmingly wine-y. While the beef fell apart, it was a little on the dry side and just wasn’t magical.

Signora Falaschi’s Peposo, however, was a dish of such surpassing perfection that I begged our translator to ask her just how she had made it. I had visions of sitting around my table at home with a glass of wine and a giant platter of Signora Falaschi’s Peposo on top of polenta while the snow swirled and blew madly outside of my windows. I tried to arrange my face in the most beseeching way I could while our guide Carolyna translated for me. Thankfully, Signora Falaschi’s nature was as generous as her cooking, and she shared willingly, teaching me a few new cooking tricks in the process.

The keys were similar to what Bill Buford had shared in Heat:

But where Signora Falaschi’s peposo departed from Buford’s made the crucial difference: 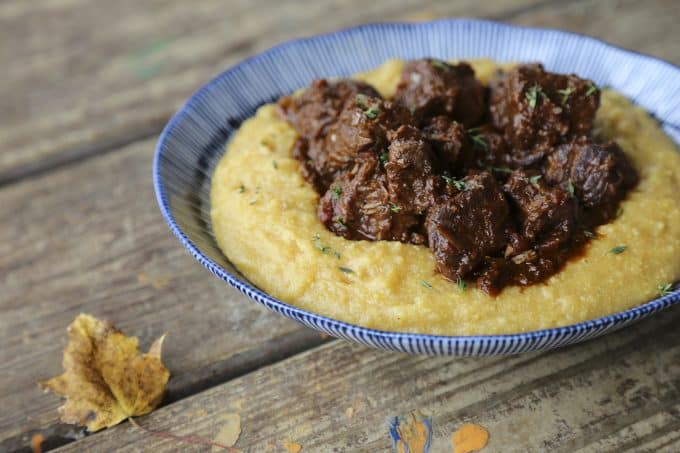 I have to think it was that it was that tiny list of crucial changes that made the difference between alright and transcendent. Oh, and incidentally, I already got to indulge my fantasy of a snow globe giant bowl of hot polenta topped with Signora Falaschi’s Peposo – Peppered Beef Stew. It was every bit as wonderful as I imagined it.

Every single person to whom I have served this (and that has been a goodly number because of my obsession) has been in raptures over it and asked for the recipe. That’s a mark of success for any recipe, in my book. 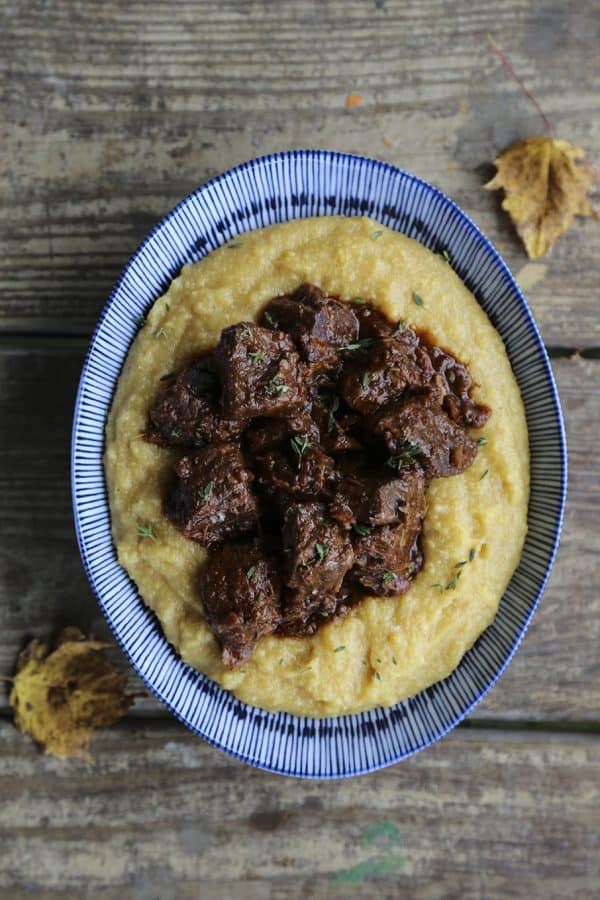 Prep Tips {Use these to make Peposo more easily} 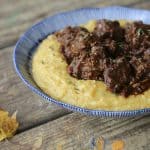 Do you love this recipe for Peposo? Try these recipes!