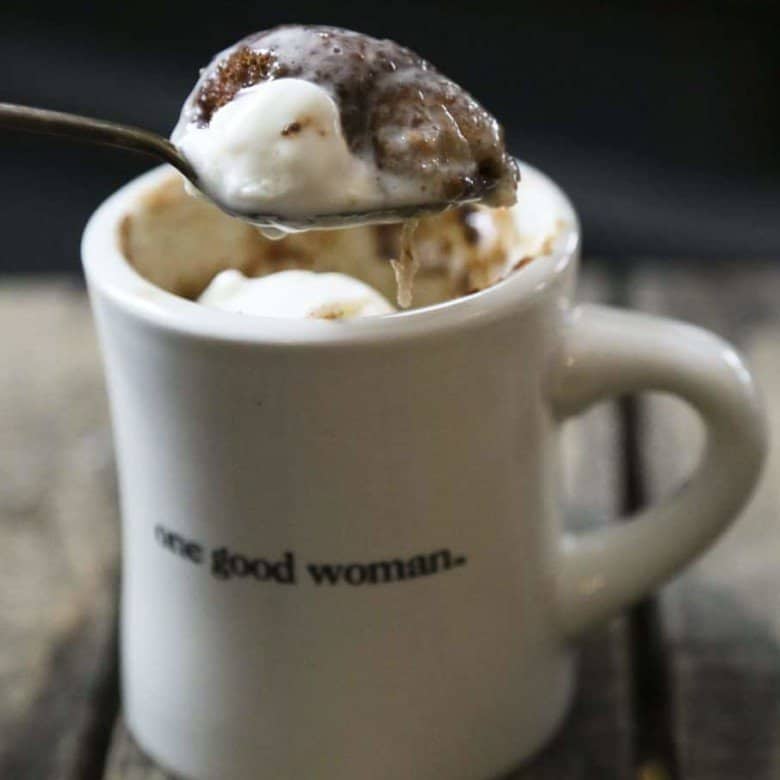 Snickerdoodle Mug Cakes are everything a cake should be but littler; tender, fluffy, moist, and delicious. Bonus: they’re done in mere minutes!

I’m a little late to the mug cake game. This is mainly due to the fact that all of them I tried were wacky texturally; too dry, too wet, too tough, too spongy, too weird, and not cakey.

But then one night I got a hankering for something sweet and cinnamon laden. That’s what I usually crave when it’s a sweets-emergency.

I decided to get down to business and really figure out how to make a mug cake that was worthy of the name ‘cake’. The boys selflessly offered to eat all of my experiments, so the quest for a perfect mug cake was under way.

The result was a glorious Snickerdoodle Mug Cake. Moist, tender, fluffy, cinnamon and vanilla butter cake with a signature cinnamon sugar crust that was serious cake, not just ‘mug cake’. 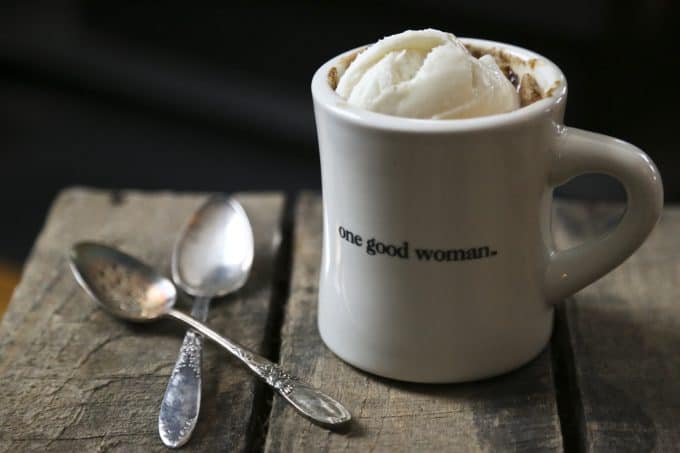 I nailed it, folks. But I wanted to be sure that it worked in a variety of microwaves with a variety of cooks, so I set out with the what is probably the one and only time I’ve ever canvassed family and friends and asked them to produce an entire dish in the microwave.

I even had ALL five of my sons make one individually because the best gauge to see if a recipe is follow-able is to ask a child to do it. All of them made a tasty cake with varying degrees of adhering to the recipe, and so, I bring you the Snickerdoodle Mug Cake.

The best part of it all is that even if you’re stuck indoors due to inclement weather, chances are good you have all the ingredients on hand. And if you’re so inclined, it’s about the easiest cake ever to make into a vegan friendly one. 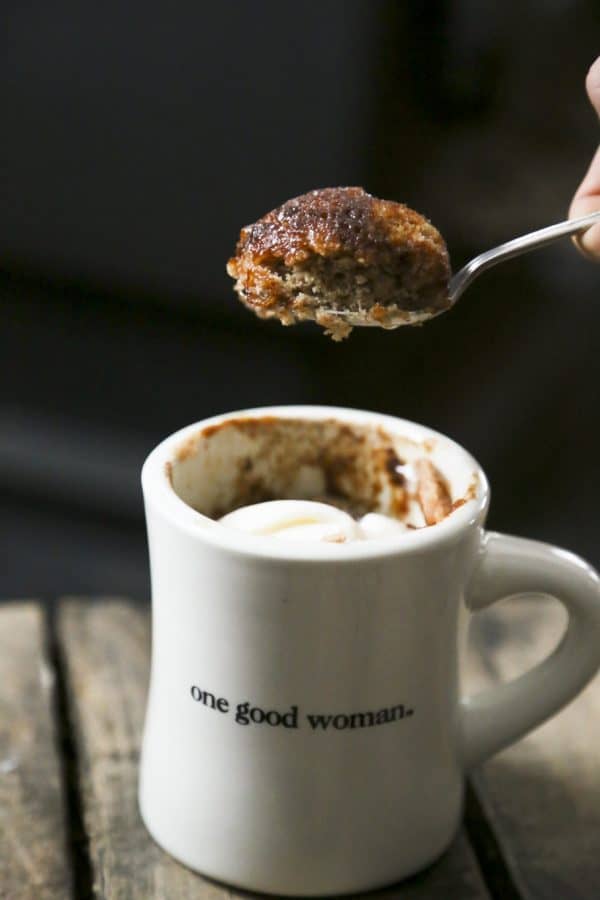 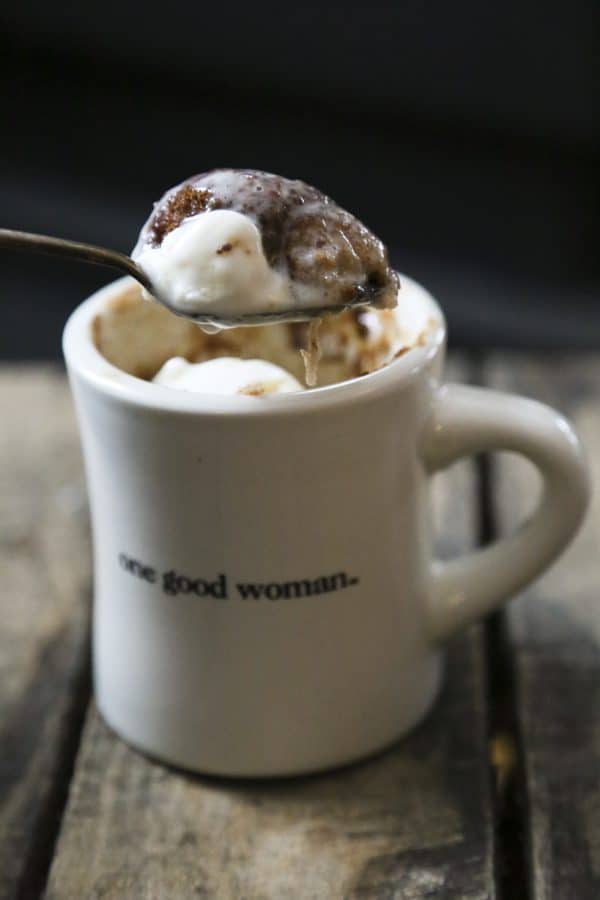 Warm cake on a whim for one with a scoop of cold vanilla ice cream or cinnamon frozen custard on it? Yeah. All that’s left for a perfect evening is a good book and a cozy blanket.

This cake does not work very well with the gluten-free blends my friends and family used to test it. I’m sorry, GF friends, but this one just doesn’t translate well.

I have a perpetual jar of cinnamon sugar in my house. This is what I sprinkle over the cake before it goes into the microwave.

If you don’t have the same jar-o-joy floating around your kitchen, you can make your own. Just whisk a generous tablespoon of ground cinnamon into 1/2 cup of granulated or raw sugar. Voila: cinnamon sugar.

Just keep this tightly lidded at room temperature in perpetuity and refill as needed. If you prefer, you can buy cinnamon sugar. It’s your call and it’s fairly inexpensive.

The recipe calls for buttermilk because that’s what I like best for cakes. I think it does beautiful things for the finished crumb of the cake and this one -as quick cooking as it is- is no exception.

If you don’t have buttermilk on hand, though, you can always do the vinegar/whole milk trick for a reasonable approximation. My friend Mary was kind enough to test that for me and she said it worked well.

You are not reading it wrong, there is no egg in the recipe. I love the texture without it. I found that adding egg to the mix made the Snickerdoodle Mug Cake a VERY spongy, weird texture.

Because there are no eggs in this cake, it makes it a great candidate for veganizing. My friend Sarah tried some vegan alterations to the Snickerdoodle Mug Cake, using Earth Balance in place of the butter and almond milk for the dairy milk.

She liked the cake, too, but thought it would benefit from a scoop of vegan ice cream on top to which I say “YES PLEASE!” I promptly made another cake and did just that with vanilla frozen yogurt. It was glorious.

One of my kids tested it with canola oil vs. butter. It was good. The buttery cake was better, but if you’re in a pinch and need a cake and don’t want to run to the store, this’ll work out.

How to make a mug cake

The Snickerdoodle Mug Cake was tested in a variety of microwaves with a range of powers from 900 to 1400 watts. All of them worked well. Keep in mind that most microwaves (like most ovens) are a little quirky and have individual traits.

You may need to tinker with the timing by a few seconds one way or the other. Any way you nuke it, though, you’ll have cake.

It may seem a little weird to microwave the buttermilk and butter together, but I like this for a couple of reasons. First, I tried it with melted butter and refrigerator-temp buttermilk. The butter seized in the buttermilk (duh) which made the cake less predictably textured.

A microwave mug cake is not the time to practice your creaming butter with sugar and alternating liquids skills, so I short-cutted the process by heating the buttermilk and butter together until the butter melted. Problem solved.

Ideally, your butter will be at room temperature before plunking into the buttermilk for microwaving. This makes the buttermilk a lower temperature when the butter is fully melted, but it’s not STRICTLY necessary. Emergency cake waits for no butter.

My kids unintentionally tested stirring all the ingredients together in the mug itself vs. the bowl. The texture didn’t seem to suffer for it, but I’m a little obsessive about making sure I don’t have dry pockets of flour in cake batter, so I still prefer to stir it in a bowl.

Mug size choice is key. Whatever you do, don’t choose a mug that holds less than 10 ounces of liquid.

The ideal mug has a wide opening. You don’t want to ‘throttle’ the cake (which WILL expand) and make a cake-volcano by using a mug with a smaller opening.

Besides Cake Vesuvius, if you choose a small opening mug, you’ll be looking at a cake with a stranger texture. I’ve tested it. Trust me.

My assumption is that it has something to do with how easily liquid can evaporate from the respective mugs, but a scientist I ain’t, so that’s strictly conjecture. 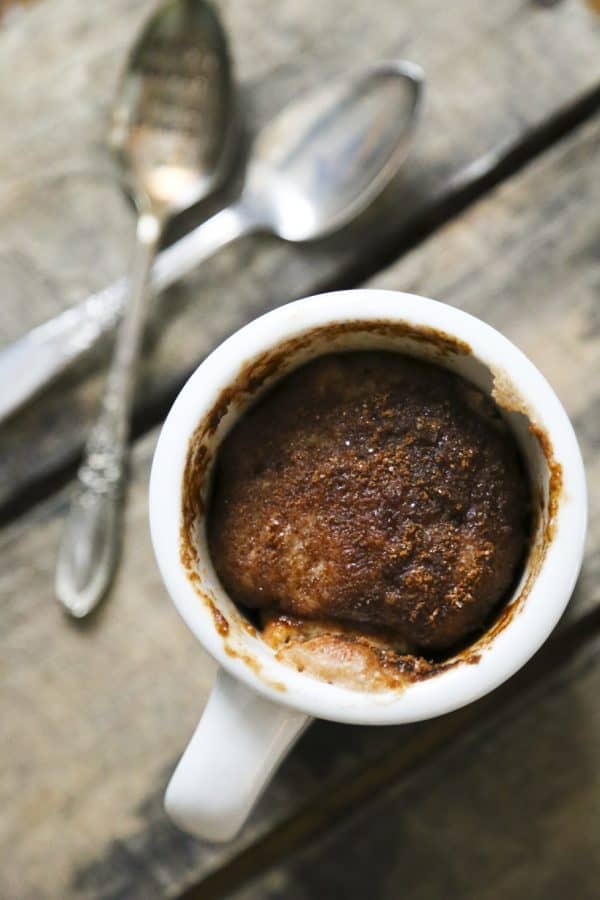 Measure the buttermilk into a microwave safe container, add butter, and microwave on HIGH until the butter is melted into the buttermilk. Remove from the microwave, stir in the vanilla extract and set aside.

Whisk the flour, sugar, cinnamon, baking powder, and kosher salt together (or use a fork to combine) in a small bowl. Add the buttermilk mixture and use a fork or small whisk to combine just until smooth.

Scrape into a microwave safe mug, sprinkle with the cinnamon sugar, and microwave on HIGH for 2 minutes 10 seconds. This is best eaten warm.

Originally posted on February 22, 2015. The cook’s notes were revised and it was reposted January 2021.