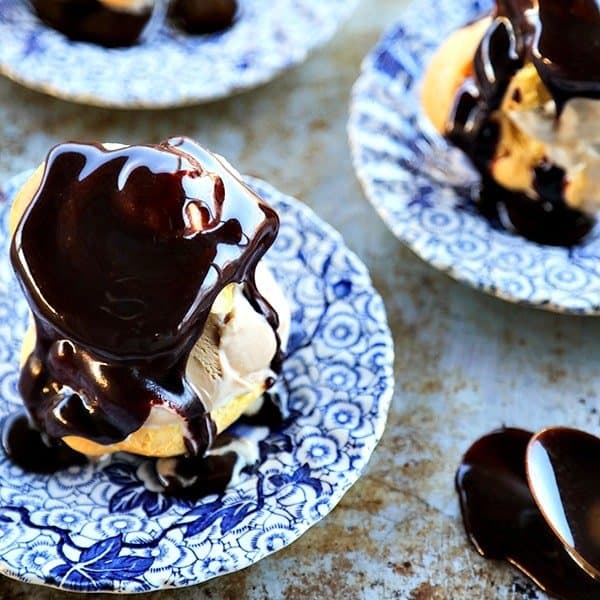 Cream Puffs are one of the world’s easiest impressive foods. Make your choux pastry ahead of time, pipe or scoop the pastry onto a lined sheet pan, then freeze. You can transfer the frozen pucks of choux pastry dough into a zipper top bag and stash to bake later, making them not just impressive, but ridiculously convenient, to boot.

My husband turned eleventy one a while ago.

Okay, not really… He turned 52, but to hear the guy talk, he sounds like he thinks he’s butter scraped over too much bread. Don’t feel too badly for him, though. He is the only person I’ve ever known in my life who -when asked how old he is- rounds up by a year or two. Somehow or another, he combines this funny aging complex with a playful personality.

When we were dating, he once insisted, “I may be eight years older than you, but I’ll always, ALWAYS be WAY more immature than you are!” He meant it.

This is the dad who does back flips off of the swings when he goes to the playground with the kids (giving me a heart attack in the process.) This is the husband who panics over the thought of picking out a gift for me, yet still pulls off the coolest gifts ever.

This is the guy who lost track of time while photo-documenting the entire process of a snake eating a frog in the side yard, thus missing a family picnic.

…And whether he’s turning eleventy one or fifty two, I like to make his favourite foods. Enter Cream Puffs, stage right.

Cream Puffs are another of those marvelous children of pâte à choux or choux paste. I’ve already told you a little of my love for choux paste.

…but I have much, much more to share with you, and THIS is one of my favourites.

What do I use to fill cream puffs?

In short, anything you want. To expound a bit, they’re delicious when split and filled with savoury or sweet goodies.

From chicken salad, egg salad, or tuna salad to ice cream and hot fudge, but not all at the same time, Cream Puffs are so easy to make and so impressive.

Profiteroles are the happy result of splitting a largely hollow cream puff in half and filling it with ice cream. HOLLER!

Can I make cream puffs ahead of time?

That all sounds awesome already, right? Would you like me to make it even more awesome? ‘Cause I can. And I will. It is more awesome because you can whip up that choux paste, pipe it out into the shapes you want and freeze them.

Then you can have cream puffs and profiteroles any old time you want. You don’t have to thaw the dough or anything prior to baking. You just pop them on a lined pan and bake. The only concession you have to make for baking them from frozen is that you add five minutes to the cooking time. That’s do-able, right?

That’s TOTALLY do-able. Make yourself or someone else some cream puffs. Make someone happy. Then make some profiteroles and make someone ecstatic.

Use these to make homemade cream puffs more easily!

Need homemade ice cream to serve with in your cream puffs? 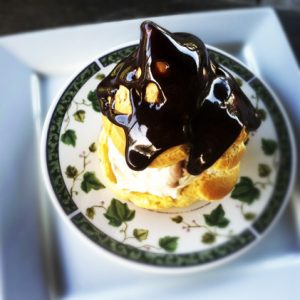 Rate Recipe Rebecca Lindamood
Prevent your screen from going dark
Print Recipe Pin Recipe
Did you know you can freeze cream puff dough (choux paste) and bake cream puffs from the frozen dough any time you want? It’s true. Bake them up and fill those crispy, brown, mostly-hollow poufs with your favourite ice cream then drizzle with warmed hot fudge sauce as the ultimate reward for having a well-stocked freezer. Happiness is a warm cream puff with cold ice cream!

For the Cream Puffs:

To Make the Cream Puffs:

To Bake the Cream Puffs:

This post was originally published April 2012, updated in November 2018 with a video, new photos, and improved cook’s notes.