Big Batch Fruit Crisp Topping is your ace in the hole for easy but impressive last minute desserts. I’d even argue that this big batch fruit crisp topping is the best crisp topping I’ve ever tasted. The fact that you make it ahead of time and stash it in the freezer so that you can whip up an apple crisp recipe or any other fruit crisp on a whim is a bonus. 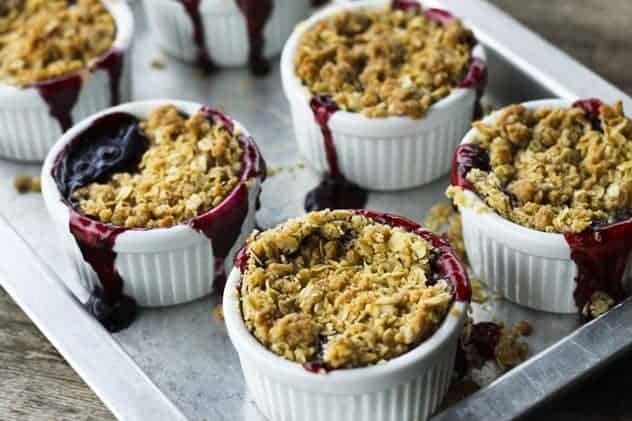 Desserts are the big to-do. The thing over which you slave for hours or -in some cases- even days and present with a flourish to ooooohs and aaaahs. I’m as guilty of that as the next food-obsessed gal, from time to time.

But really? Desserts are supposed to be a relaxing thing. Grab a spoon or a fork, a plate or a bowl of the good stuff, plop down somewhere comfortable and give a good ahhhhhhhh. They’re supposed to feed your soul without taxing it first. In fact, ‘DESSERTS’ are ‘STRESSED’ spelled backwards. Tell me if this has ever happened to you.

I’m going through my day getting done what needs to be done. I make dinner and think to myself, “Oh, we don’t need dessert tonight. We have a big dinner and that’ll do the job.” Then after dinner, when it’s just me and my honey sitting on the couch, I think, “I wish I’d made dessert. I could go for something a little sweet right now.”

I have the solution.

Make my big batch fruit crisp topping -essentially, this is sugar, oats, flour, some spices, and a lot of butter- drop it into canning jars or other airtight containers and pop it in the freezer.

Can I use Big Batch Fruit Crisp Topping to make Apple Crisp?

Oh my goodness, yes. You can make the ultimate apple crisp recipe with the big batch fruit crisp topping or you can use just about any fresh or frozen fruit. Your imagination is the limit! You can use homemade sweet black cherry pie filling, grape pie filling, apple pie filling, or even Cherry Habanero Lime Jam, Ginger Peach Preserves, Strawberry Jam, or Blueberry Jam to make your crisps, too!

How to Make The Best Fruit Crisp Recipe

When you hit the dessert-regret stage of the evening, fill a little ramekin or two filled with fresh fruit or canned pie filling. In a pinch, you could even put jam in the ramekins. 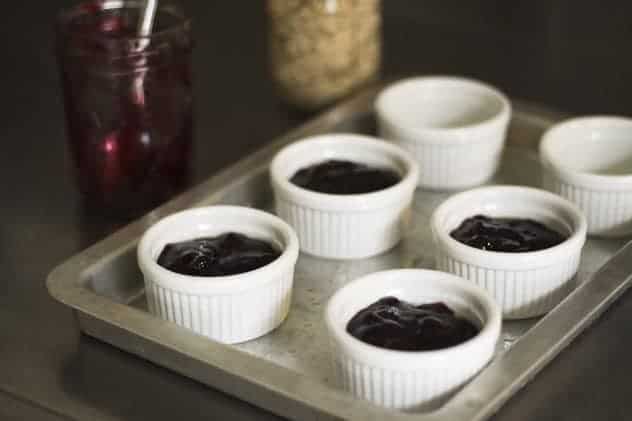 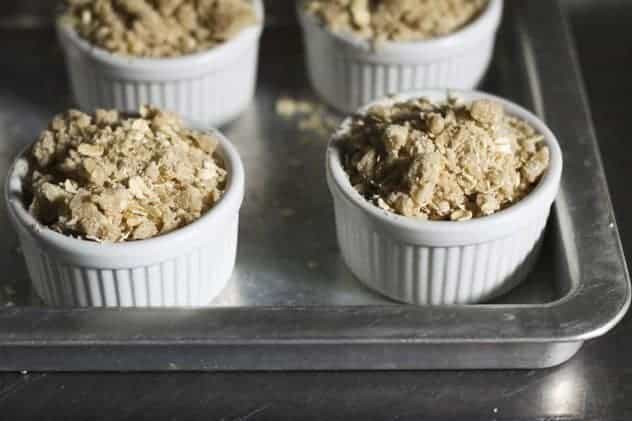 … and bake. Thirty minutes later you will no longer be stressed. You will have desserts.

How do I serve fruit crisp?

Here’s what happens next. At least at OUR house, it’s what happens next anyway. We get a container of vanilla ice cream out of the freezer and let it set on the counter for about eight minutes. We scoot a still-pretty-toasty ramekin into another bowl and top it with a pretty massive scoop of ice cream. We let the ice cream start melting just a wee bit and then we dive in. 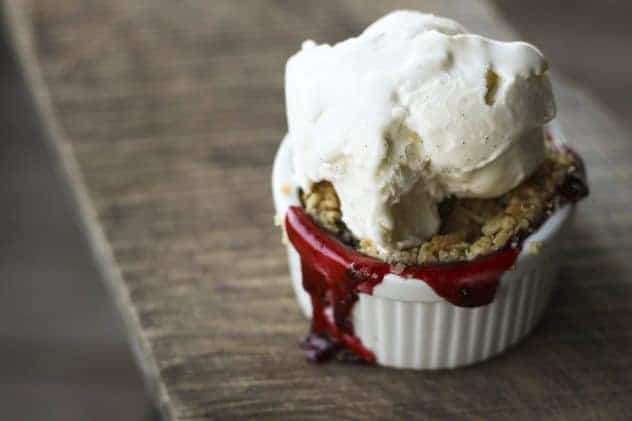 Not bad for a dessert you threw together over a commercial break, eh? In fact, I’d call it darned good. So good, that it is the opposite of stressed. Literally.

Once you’ve tried Big Batch Fruit Crisp Topping, you’ll want to be sure to have it stashed in the freezer at all times!

How do I use Big Batch Fruit Crisp Topping?

Use these to make Big Batch Fruit Crisp Topping most easily 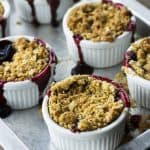 The only thing better than a fruit crisp is one that you've put together in less than 5 minutes using crisp topping that you made ahead of time in a big batch and stored in the freezer. Use your pre-made crisp topping on fresh fruit, canned fruit or pie filling for a glorious, almost instant fruit crisp. Adapted very gently from and with many thanks to Aimee Bourque, of Simple Bites.
Prep Time 10 minutes
Servings 32
Calories 185kcal
Author Rebecca Lindamood

To Bake Fruit Crisps With Make Ahead Crisp Topping: 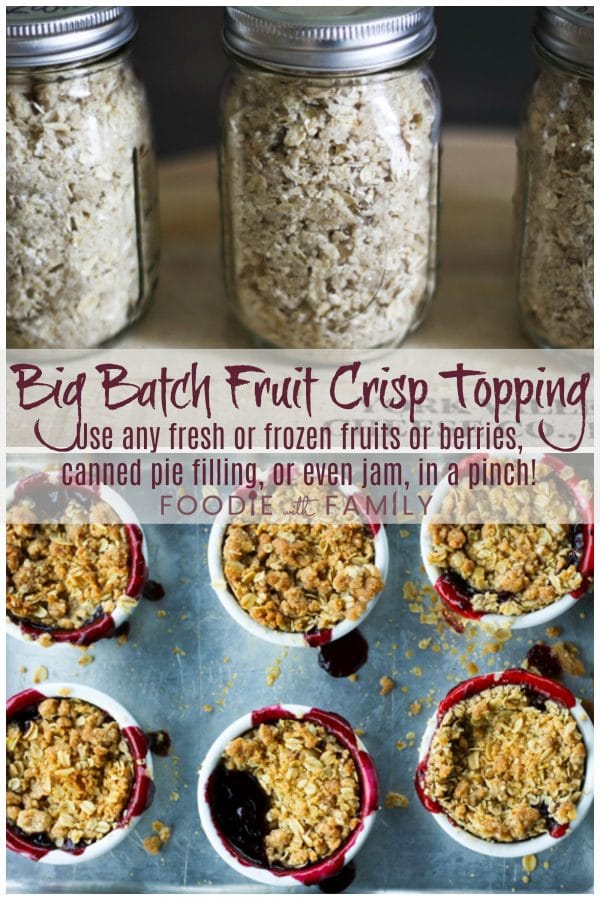 This post was originally published in October of 2012. Updated with video and improved Cook’s Notes in August of 2018. 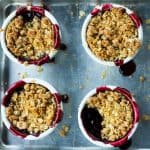