When I was a kid, I eagerly awaited that magical moment in late fall -almost always pushing toward Thanksgiving- when my mom would feel like the weather and season was right for making chex mix. The making of the family sized batches of our favourite snack mix fell into the purview of my duties and it was one that I took very seriously. When I was a kid, I skimped on the wheat cereal portion because it didn’t ding my chimes. I didn’t like the way it soaked up the butter and seasoning. Somewhere along the line, though, my taste buds did a 180° and they became my favourite thing in the entire bowl; valued high above pretzels and rice chex and maybe even rubies, had they been present.

These days, I keep up my mom’s tradition of not making chex mix until we are breathing down Thanksgiving’s neck. Somehow it makes it seem even more special. That doesn’t mean I’m cravings-free the rest of the year, though. I had a whole box of bite-sized shredded wheat cereal hanging around my pantry when I did a purge the other day. For one reason or another, I felt like it had no business being in there any more, so I dragged it out of the dark corner where it was languishing and decided to make it into a snack. It doesn’t count as chex mix if you don’t put Chex in it, right? RIGHT? Besides, my intent for these was to use the classic snack mix method to create a cheesy snack.

I used my usual garlicky butter mixture (perfected, lo these many years) on the whole wheat cereal, toasted à la chex mix (while not being chex mix) and tossed it with a serious dose of White Cheddar Cheese Powder

(that’s an affiliate link folks) to make a buttery, garlicky, crunchy Cheddar bomb of a snack. To say they didn’t last long at our house might be the understatement of the century. These were voted “the best after school snack EVAH!” (emphasis: theirs.)

Mercy, those were good. I foresee many batches of these to hold us over ’til chex mix season.

If you’re looking for more fun, healthy snacks, try our Hummus After School Snack Board and Za’atar Tortilla Strips for Salads and Snacks! You’ll definitely want to try our Fudgesicles Frosties and Homemade Fudgesicles (Fruit or Agave Sweetened), too! 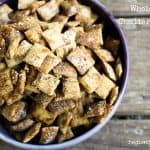