Pepperoni Pizza Gnocchi; because some days call for pillowy gnocchi sauteed in a little garlic butter, mixed with brick red pizza sauce, melted mozzarella, and pepperoni, and topped with more mozzarella and pepperoni that is then broiled until bubbly and browned like a magnificent pizza.

The truth? This came about as a braces friendly alternative to my boys’ favourite comfort food after two of my guys had big braces adjustments.

On the trip to our orthodontist, they had been talking about how hungry they were and how badly each of them wanted pizza. On the drive home, they both requested pudding.

One said mournfully, “Well, I wish we were having pizza, but it would hurt too much to chew it!”

Every mom has their kryptonite. I’m pretty tough and am pretty generous with my “no” as a parent, but I have a really hard time seeing my kids want to eat something and not be able to for whatever reason.

I decided to make them a pizza they could eat, and that’s how Pepperoni Pizza Gnocchi came to be.

It’s really the best of the world of pizza combined with the best of pasta for an easy-on-the-teeth version of everyone’s favourite comfort food.

Pizza gnocchi is all the flavours of pizza in pillowy gnocchi sauteed in a little butter; garlicky pizza sauce, pepperoni, stirred into the gnocchi, covered with a generous layer of melted mozzarella, pepperoni, and a shower of fresh parsley.

Clearly it’s not just for those with braces; the rest of our family very enthusiastically dove into this pan, and I realized a little too late that I probably should have made a double batch.

Mercifully, Pepperoni Pizza Gnocchi is pretty fast, so I had a second batch going in no time and my braces boys had stomachs full of their longed-for pizza despite their sore jaws.

I know there are far greater achievements and I know I’ve failed as a mom many times, but these are my parenting win moments, friends. I take those minor wins whenever I can get them! What are your greatest “minor” parenting victories?

I love to use my canned pizza sauce from Not Your Mama’s Canning Book, but I have also made this with slightly thinned Best Thing Tomatoes and Slow-Cooker Homemade Pizza Sauce. These are my preferences, but a nice, thick, commercial pizza sauce will also work here.

Please grate your own mozzarella for this. The stuff that comes pre-grated in a bag is tossed with anti-clumping powder that not only keeps it from clumping, but also keeps it from melting into that lovely, long, stringy, creamy cheese we love so much.

On the subject of pepperoni, I used adorable tiny Hormel mini pepperoni I found at Wegman’s. You’re welcome to use larger pepperoni if you prefer or can’t find the little ones.

Just use the equivalent amount by weight. I used four ounces of the tiny pepperoni, so four ounces (about 1/4 of a 1 pound package) of sliced pepperoni should suffice.

Do not overcook your gnocchi when you boil it. If anything, undercook it by a minute (if making dried gnocchi) or by 30 seconds (if using fresh gnocchi.) This is because it will continue to cook in the sauce after being sauteed in the butter with the garlic.

DO use an oven-safe pan like this one because you’re going to pop it under the broiler to get that bubbly, browned crust.

Use these to make Pepperoni Pizza Gnocchi: 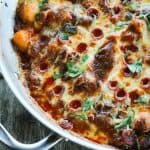 Pepperoni Pizza gnocchi is all the flavours of pizza in pillowy gnocchi sauteed in a little butter; garlicky pizza sauce, pepperoni, stirred into the gnocchi, covered with a generous layer of melted mozzarella, pepperoni, and a shower of fresh parsley.
Author Rebecca Lindamood

This post was originally published in February 2017, updated in October 2018.