Maple Apple Chai Pie was the two-years-running birthday pie for my son who has never repeated any of his other birthday requests. Maple Chai Apple Pie is the one and only food he has ever asked for twice, and for good reason.

Last year, he asked for an apple pie (which made my pie loving/cake-neutral heart rejoice) but asked for a twist; he wanted it to be maple sweetened with cinnamon and other spices.

I happily obliged. I added my own little twist, too, in the form of a goodly drizzle of heavy cream tossed with the apples. The idea was to make it rich and creamy like a chai latte.

He took one bite of the Maple Chai Apple Pie, though, and promptly declared it to be the best pie I have ever made of any kind. I know this sounds dramatic, but he was right; this was by far the best apple pie I had ever made.

I was more than thrilled that my little man asked for it again. After making it for my birthday boy, my husband seemed sad when I told him that I was happy with my photos of the pie.

He clarified, “I was hoping you might have to make another one.” Then he asked to add it to the Thanksgiving menu. I had to say yes. I wanted another slice, myself.

What makes it so memorable? It certainly doesn’t hurt matters that it is visually stunning. Maple Chai Apple Pie appears to have been tiled with deep golden brown, sugar crusted fall leaves. Underneath the pie crust “roof”, you find tender apples in a creamy sauce spiced with cinnamon, ginger, cardamom, nutmeg, black pepper, and cloves.

Can’t you see this perched on your dessert table for Thanksgiving? Can’t you see me sneaking in and yoinksing a piece?

To cut the small pieces of pie crust used to cover the top of the pie, I use the maple leaf from this set of small pie crust cutters. Any small cookie cutter will do the job as long as it yields pieces that are about 1 1/2-inches to 2-inches at their largest point.

To tile the pie crust, start by laying out a slightly overlapping circle of the small pie crust leaves or pieces around the outer edge, allowing the crust to overlap the rim slightly. As you get back to the starting point, spiral inward, continuing to overlap the pieces until you reach the center.

If you find the edges of your pie crust starting to brown too quickly -in other words, before the center tiles brown nicely and the juices start to bubble up between the pie crust tiles- you can gently wrap the outer edges with some foil. It will protect the outside edges while the center continues to cook.

I’m not going to be the person who tells you never to dig into a hot pie, because that is one of the great joys in life. That being said, if you’d like slices that hold together, you do need to wait for your Maple Chai Apple Pie to cool almost completely to room temperature before slicing and extricating a piece.

I recommend using these to make Maple Chai Apple Pie: 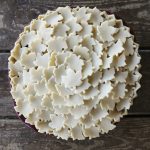 This post was originally published October 19, 2016 and was revised in October 2018.