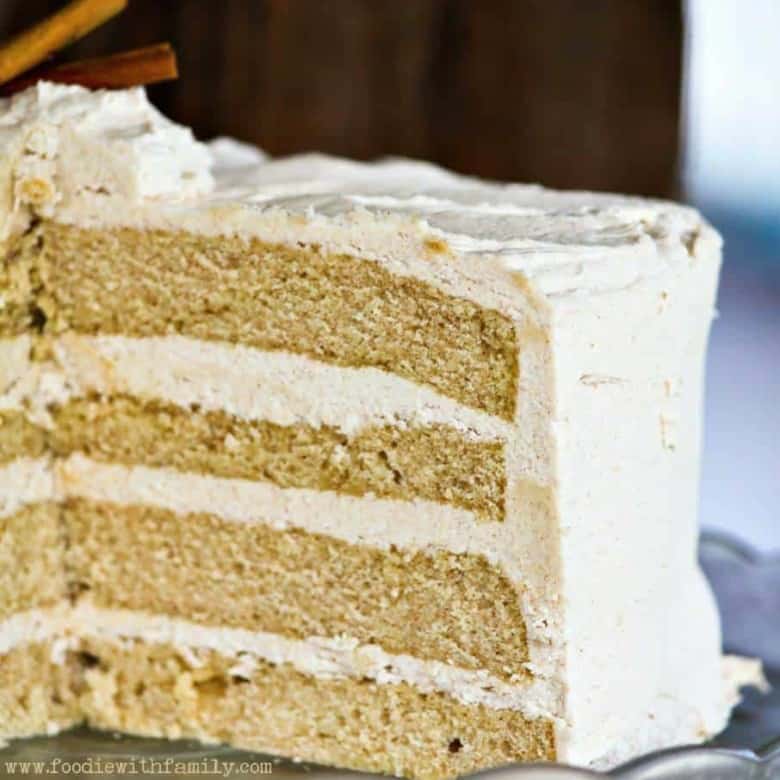 In honour of Valentine’s Day I’m bringing back one of my most popular posts EVER here on Foodie with Family from the archives. That’s right, folks, Snickerdoodle Cake with Brown Sugar Cinnamon Buttercream is back. Make this sweet for your sweetie.

This Snickerdoodle Cake is something special folks. A towering four layer Snickerdoodle cake made with cinnamon, vanilla, and butter is generously iced with a rich Brown Sugar Cinnamon Buttercream Frosting Recipe for a cake that is the stuff of dreams. Make no mistake. This one is indulgent and it is worth it! 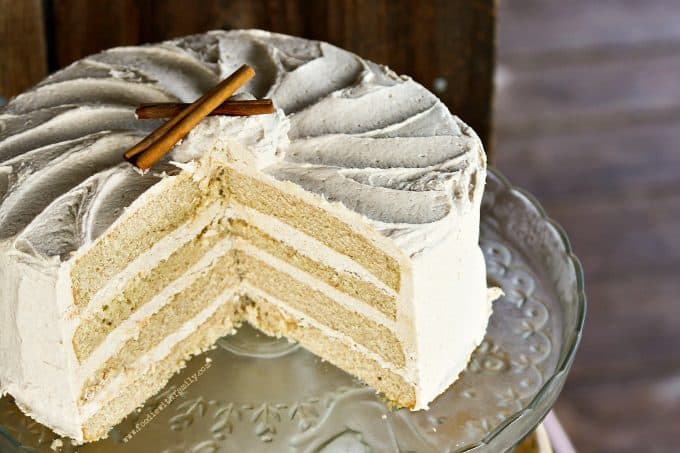 Here is the cake that upended my tidy little world. This is a Snickerdoodle Cake with  Brown Sugar Cinnamon Buttercream Frosting Recipe.

I’ve mentioned before that I’m not fond of cake or frosting. (Here and here, for starters…) As a little girl, I watched “Pollyanna” over and over. I’m talking about the original nineteen-sixty Disney film. It was one of the twenty five movies available for rental in the small movie  section of the Glen’s Market in Gaylord, Michigan where we shopped. Despite my dislike for cake, I dreamed of the giant slab of cake she scored at the fair. That towering layer cake called to me like no other cake could. And for the most  of my life, I resigned myself to the fact that while that Pollyanna cake looked so good, no cake measured up to the promise it offered. That is still true except. for. this. cake. And who do I thank for this earth shaker? My friend, Krysta. She, without a word, sent me this link. No word of warning, no heads-up. No. Just a link. She knows my feelings on snickerdoodles so she sent it my way. She didn’t know it, but she delivered my Pollyanna cake to me.

All of a sudden, in my brain at least, I was Hayley Mills wandering around a small town fair with the world’s largest slice of layer cake, in this case, Snickerdoodle Cake and a sunny disposition. I might’ve even belted out the National Anthem and poked at the little prism dangling in my kitchen window. It was as good as I thought it would be.

The Snickerdoodle Cake itself is a cinnamon vanilla butter cake. (I died a little bit just typing that…) It is moist, it is cinnamon-y. I’ve never had a cake like that. It is layered around and slathered with the only buttercream I have ever craved in my life; brown sugar cinnamon butter cream. (A little more dead now…) It is smooth yet still crunchy with sugar. It has little bursts of brown sugar and cinnamon and it is smoothed out with half and oh-my-goodness half. People. The buttercream. It must be stopped. CLICK HERE for the Brown Sugar Cinnamon Buttercream Frosting Recipe.

Before you pop over to the recipe for the Brown Sugar Cinnamon Buttercream and rub your eyes and question me, that is not a typo. Yes, there really ARE 4 1/2 sticks of butter in the buttercream. I told you it must be stopped. 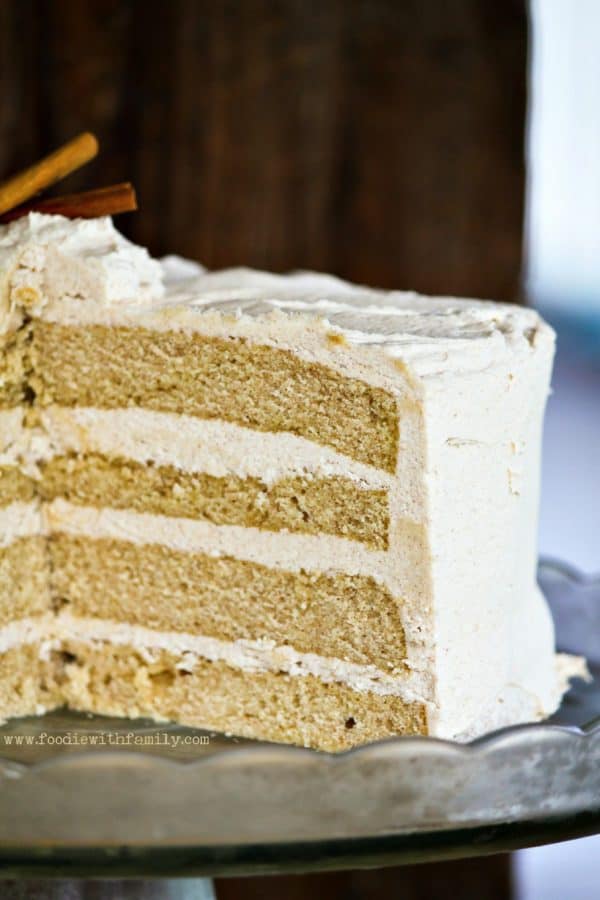 -To butter two pans easily, smear the pans with the butter wrappers you used for the cake itself (use more soft butter if necessary.) *If you choose to use parchment, too, butter under AND over the parchment for easiest release.

-When dividing cake batter between pans, use a scale to get them as close to even as possible. No scale? Scoop it in with a measuring cup.

-Smooth the top of the cake batter into the pan and tap firmly on the counter several times before baking to settle the batter evenly.

-Rotate pans front to back and side to side mid way through baking.

-Cool the cakes COMPLETELY before slicing into layers. Do not hurry this or you will regret it immensely while you cry over your broken cake.

-Before slicing your cooled cakes into layers, use a large serrated knife to even up the top of the cake. (In other words, to slice off any dome that formed while baking.)

-Before you move your cake to the plate you’ll use to frost and serve it, lay four strips of parchment or waxed paper around the edges. Center the cake on the parchment strips. This will help you frost the cake rather than the plate. When you’re done frosting, pull the strips straight away from the cake. Ta da! Professionally done. Go you!

-Make sure each  layer of frosting/cake is level before adding another level. It is much easier to adjust as you go along than to try to fix everything with frosting.

-When the cake is assembled, refrigerate for at least an hour (preferably more) before attempting to slice into wedges. If you skip this step, the cake is likely to shift around on the frosting and look like it was thrown together by drunken monkeys.

-If you forget all of these steps it really won’t matter because you’ll still have this cake. Pour yourself a nice hot cup of coffee or tea and enjoy it anyway! 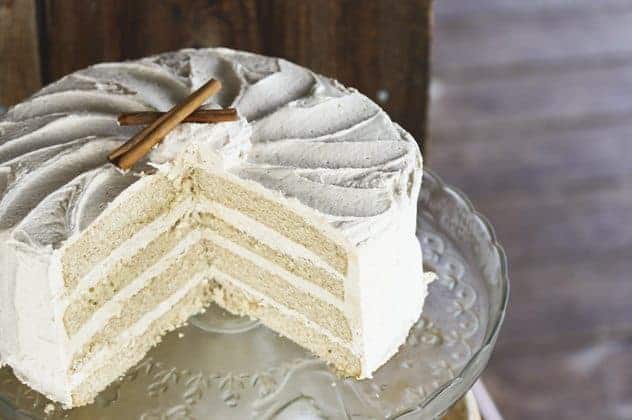 To Bake the Cake:

To Assemble and Frost the Cake: