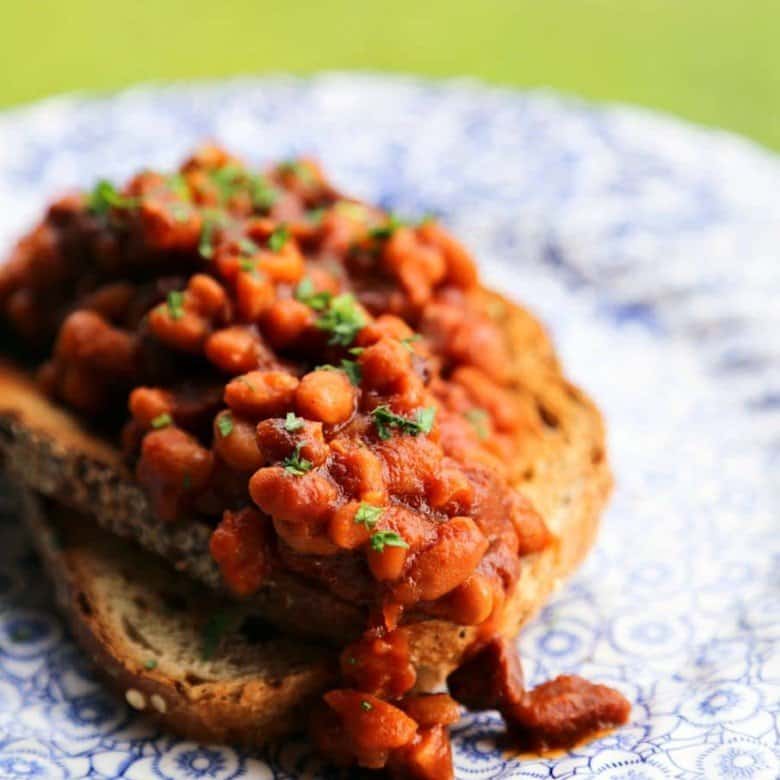 My 13 year old son is like a little old British man trapped in an American teenager’s body when it comes to food. He cannot get enough of beans on toast for breakfast.

My grandpa always loved baked bean and toast sandwiches and I share that love. I’m no food snob, but I can’t get behind my young man eating canned baked beans every morning on toast. Enter Slow-Cooker Breakfast Baked Beans, stage right. 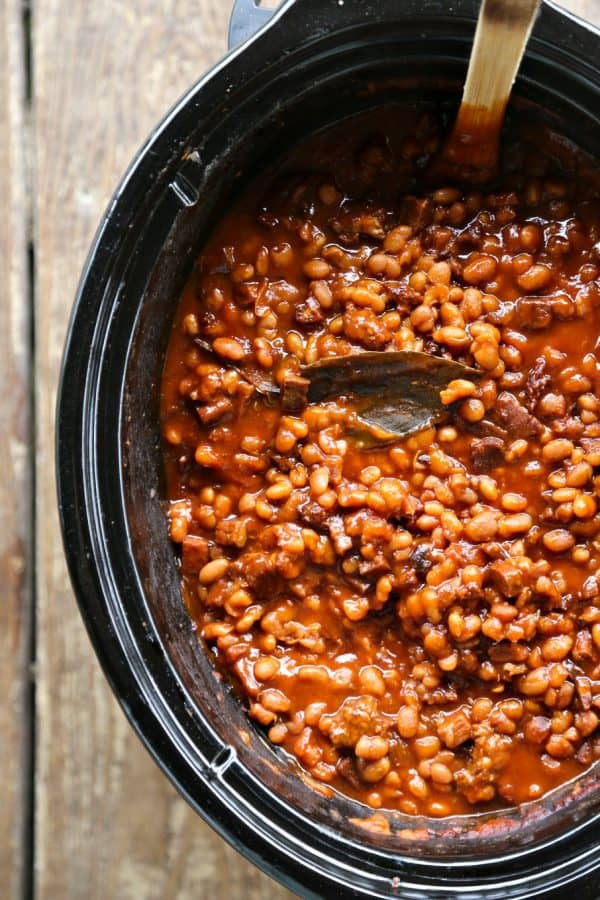 Slow-Cooker Breakfast Baked Beans are from-scratch (don’t let that intimidate you! It’s easy; I promise!) dressed up for the first meal of the day with hearty helpings of Canadian Bacon and browned breakfast sausage among tender beans in an irresistible maple and coffee sauce.

They come together as easily as can be, with the most complicated portion of the programme being browning up a pound or so of breakfast sausage. The payoff is HUGE, flavour-wise, though.

When my 13 year old tasted these, he said, “Mom. There’s only one problem with these beans that I can see. You put too much good into them. I can’t stop eating them.”

These Slow-Cooker Breakfast Baked Beans are made for comfort and the happy filling of bellies. 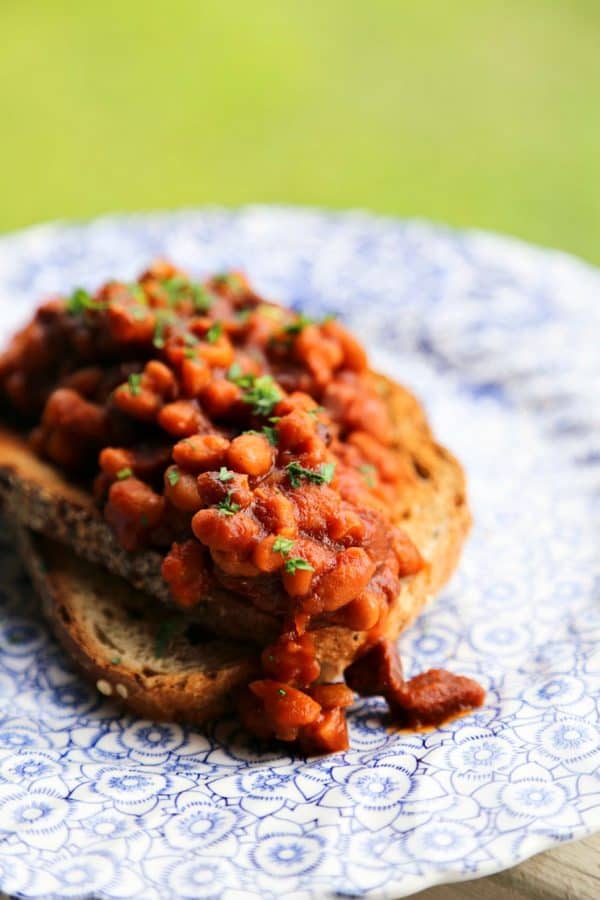 Even if I didn’t have the teeming hordes of hungry teenagers here, I’d be inclined to make Slow-Cooker Breakfast Baked Beans by the full-sized batch because they freeze beautiferously in single serve portions. It’s nice to be prepared when it comes to beans.

A full-sized batch of Slow-Cooker Breakfast Baked Beans is held perfectly by my beloved 8 quart slow-cooker. Big slow-cookers are the bees-knees, folks.

Let’s address those beans. In a perfect world, I’ll cook my beans from dried every time. I love the texture and flavour of them when they’re prepared that way and I love that I control the overall sodium in the final dish.

I get that we’re in the real world, though, so I’m here to tell you that making the Slow-Cooker Breakfast Baked Beans with canned beans is also tasty. If dried beans vs. canned beans is what stands between you and making this dish, grab the canned beans.

If you DO cook your beans from dry, save some of the liquid they’re cooked in. That can be the extra liquid you add to the slow-cooker.

If you use canned beans, you’ll want to drain and rinse them to remove some of the extra sodium, and use a cup of unsweetened apple juice or (better yet) apple cider for the extra liquid needed for the long cook.

I know some people have a moral aversion to prepping or cooking anything that goes into a slow-cooker, but I’m here to tell you to try it! The difference you get in flavour is well-worth the extra 5 to 10 minutes it takes to brown the sausage before you toss it into the mix. It adds a layer of flavour that you just can’t get by plunking the raw sausage straight into the cooker.

The other advantage to pre-browning the sausage this way is controlling the final level of fat in the product. If you have a sausage that’s tremendously greasy, you want to brown it first to drain some of that off so you don’t feel like you’ve just smeared your lips with bear fat when you take a bite of Slow-Cooker Breakfast Baked beans. I’m just looking out for you, folks.

I use homemade Canadian bacon because I have it handy, but commercially available Canadian bacon is good in Slow-Cooker Breakfast Baked Beans, too. If you have the option, purchase the larger portion of Canadian bacon instead of the pre-sliced ones. That way you can slice them into cubes that will stand out better in the finished beans.

When it comes to maple syrup, I’m ALWAYS going to choose Grade B Dark Maple Syrup. Take it from a girl who grew up on the real deal because her dad made maple syrup.

Sure, if you insist, but it won’t be as strongly maple-y. Can you substitute pancake syrup? You can, but only if it is homemade pancake syrup.

If you’re wondering whether you can use store bought pancake syrup that’s a no. Just no. Nopers. Negatory. Not here. Don’t do it.

I know they’re called Slow-Cooker BREAKFAST Baked Beans but people, these are so darned good with grilled sausages or hot dogs or chicken or pork chops or… well, you get the idea. Eat ’em all day long. My 13 year old does.

Use these to make Slow-Cooker Breakfast Baked Beans: 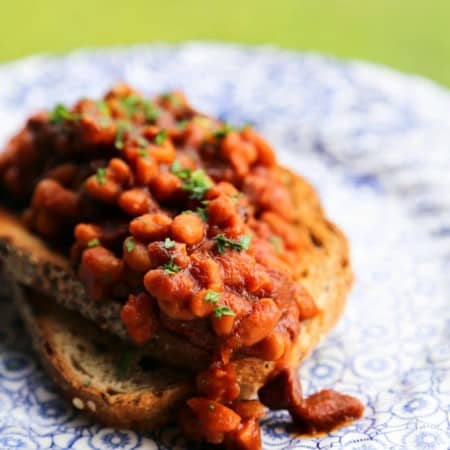 Rate Recipe Rebecca Lindamood
Prevent your screen from going dark
Print Recipe Pin Recipe
Slow-Cooker Breakfast Baked Beans are dressed up for the first meal of the day with hearty helpings of Canadian Bacon and browned breakfast sausage among tender beans in an irresistible maple and coffee sauce.