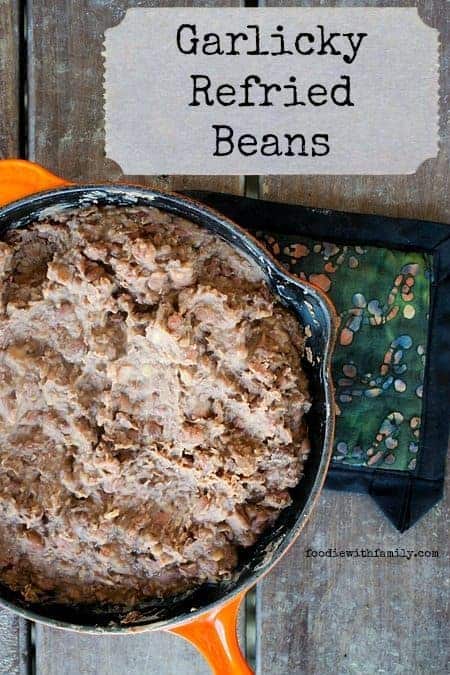 Refried beans are a staple food at our house. I can’t imagine trying to feed five boys without refried beans, to be honest. One person or another is always ‘STARVING!’ and ‘ABOUT TO DIE IF I DON’T EAT!’ or ‘HAS A STOMACH THAT IS A GIANT VOID!’. You thought drama was reserved for daughters? Oh, no. I assure you it isn’t. This is most especially true when it comes to describing the depths and depravity of their hunger and when the last time was you provided food for their neglected, shrunken stomachs. That last one? The one about the void? That’s my eight year old’s preferred method of telling me he’s hungry. And it is delivered with such a look of pain the child actor should get an Oscar.

I make a batch of these almost weekly but sometimes more often and divide them into snack sized containers then stash them in the freezer. Even the littlest knows how to pull out a container of beans, crack the lid open, and microwave it until hot all the way through. Granted, he does it wearing an apron and oven mitts that go up his arms past his elbows, but people- it’s an independent kitchen skill. (In other words, I can go to the bathroom for five minutes without someone banging on the door yelling about how their stomach will invert if I don’t feed them immediately.) I’m not arguing!

Where does a kid go from there? In our house, we have an almost bottomless supply of tortilla chips. I buy them by the case at Aldi. (Glorious, wonderful, fabulous Aldi. Long may it remain in business!) The guys take a reheated container of refrieds, a bag of chips, and it holds them in gastronomic comfort for at least an hour.

Those beans aren’t just snack fare, though, they’re the basis for an almost limitless number of meals from fast beans-n-rice and quesadillas and nachos to burritos and tacos or veggie burgers.

Why should I make refried beans from scratch?

That’s the million dollar question, isn’t it? It’s not like canned refried beans are expensive. They’re dirt cheap. And, honestly, I keep a couple cans around for emergency situations (like when the kids had friends over and had failed to tell me ahead of time they had eaten the last of the freezer stash the previous day.) Dried beans are also cheap and shelf stable. When you break it down by money, you’re about even whether you use canned or dried.

Sure, you can make arguments that the homemade ones are healthier (mainly because they can be when you control the amount of sodium and fat that goes into the mix.) So if money and health aren’t my main motivators what is? The reason is simply this: Homemade Refried Beans are so much better tasting and texture-wise that it’s hard to believe they’re the same food as the canned ones.

Hyperbole? No. Not here. Homemade refried beans have FLAVOUR. They’re not just mushed pinto beans with fat. Granted, we’re still talking mashed pinto beans with fat, but the ones from scratch are INSANELY delicious. My version is simple but sublime: JAM PACKED with garlic, a hint of smoky spice, creamy with some whole beans still visible. 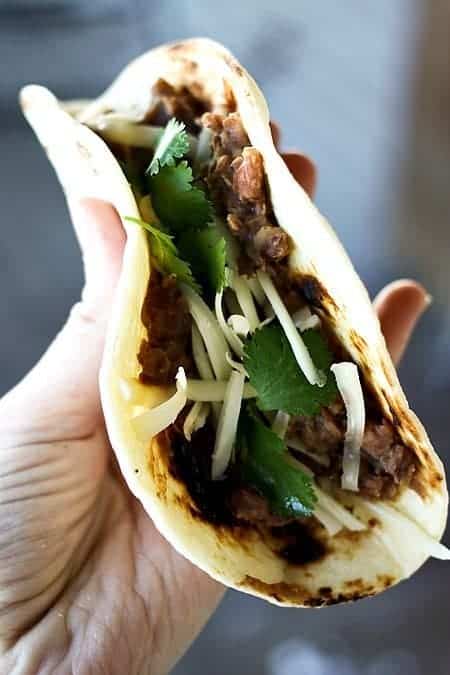 One of our favourite snacks: a simple tortilla, charred lightly, spread with refried beans, topped with a little grated cheese and a couple cilantro leaves or salsa. 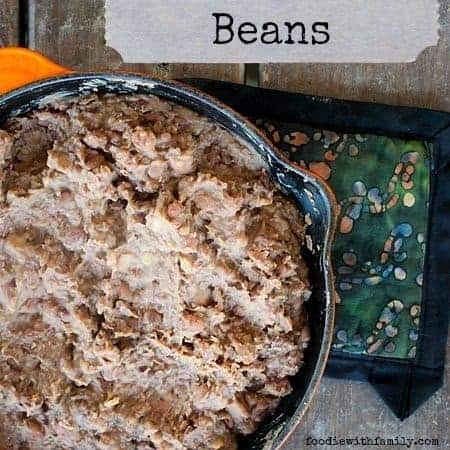 Rate Recipe Rebecca Lindamood
Prevent your screen from going dark
Print Recipe Pin Recipe
There's nothing like these flavour packed, creamy, slightly smoky and spicy Homemade Garlicky Refried Beans. They blow the stuff in a can out of the water in taste, texture, AND nutrition while being easy to make and easy on your wallet!

*The final cooking time on the beans is largely dependent on how old your dried beans are. This doesn't necessarily mean that if you just bought them they're newer. That's okay, it's a product that's MEANT to be shelf-stable for years. Just have a little patience, add more water while it's in the oven if it starts running out too soon, and you'll be rewarded with delicious beans! **If you want a smoother end-product, you can use a potato masher in the pan to help break up the beans while they cook. If you want an ULTRA smooth finished product, you can whirr the cooked beans in a food processor fitted with a metal blade.