If you’re landing here from our homemade easy mak kimchi recipe, welcome! Try this recipe out and you’ll be so glad you did! 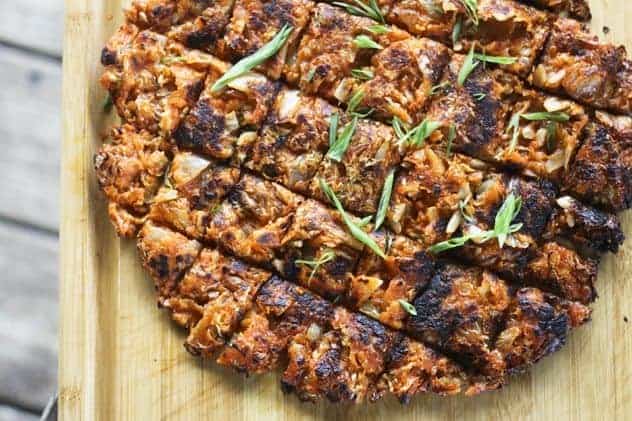 Back in the day -when I worked early hours as a prep cook and late nights as a slinger of pub grub- I wondered more than once how I’d ever find true love when I always smelled like garlic, onions and a fryolater.

It was a valid concern folks… I remember one particularly busy week (the café where I worked was in a tourist town that hosted an insanely well attended annual festival) when I broke apart,  peeled, and minced hundreds of heads of garlic and almost as many onions.

I spent hours upon hours on my feet frying onion rings and French fries and Monte Cristo sandwiches and dill pickles. I went to a social event at my college after getting off of my shift without hitting the shower first.

I heard no fewer than five people say -as they walked by me- something like, “Woah! Are they making garlic fries? I totally smell garlic fries.” or “Something smells like old oil!”

I  was sure that I had to give up cooking or live a lonely life. As it was, I was looking at it all wrong. I just had to find a man who loved garlic, onions and French fries.

…And find him I did. Well, actually, he found me, but that’s a story for another day. My beloved Evil Genius doesn’t just love garlic, onions and fries, he loves almost all stinky food. In fact, more often than not, the stinkier the better. The day my husband discovered kimchi was one of the happiest days of his life.

Our well-loved and now defunct (sob) favourite restaurant was the scene of that happy day. We sat at our usual table and the owner approached us with a small bowl of some vibrant red salady looking stuff.

Since we trusted Mr. Wong, we dug in before asking what it was while he told us, “This is my homemade kimchi!” We were both instantly hooked, but my husband’s love of kimchi was stratospheric.

He started buying kimchi at the local Asian market to keep in our refrigerator for occasional snacks, but soon that wasn’t enough. He would walk across the street from his office to the market to buy containers of their funkiest, bubbliest kimchi to have for lunch in his cubicle.

…Do you see where this is going?…

He ate kimchi in a cube farm. Now, I know they’ve improved cubicles and made them look almost like little pods in very chi-chi offices, but whatever they’ve done, they still don’t have technology to contain smells within the airy vertical confines of a cubicle.

He cracked open the jar of kimchi and almost instantly heard people saying, “Oh my gosh. Do you smell that?” “I think there’s something dead in here. Call maintenance!”

He stood up, mouth ringed with red hot pepper sauce, and said, “I don’t smell anything!” and sat back down. This carried on for a few days before his colleagues realized the source of the smell and he was asked, in very specific language, to keep his kimchi in the break room.

The next day he retreated to the lunch room to eat his kimchi. Within minutes, a posse of his co-workers showed up to beg him not to eat it in the office ever again.

He offered to share to defuse the situation. They didn’t take him up on it.

He was forced to take his kimchi love back underground. He brought his chopsticks and kimchi home and stashed the jar in the fridge mumbling something along the lines of, “This wouldn’t be a problem if we were in Korea. Dangit.”

The man is my soul mate.

I’ll be the first to admit that kimchi is rather odiferous. But people, if you put that aside and taste it your rewards will be many and glorious.

It is crispy, spicy, juicy, garlicky and a power-packed-punch of umami. It is, for lack of a better description, spicy Korean sauerkraut.

Yes. It is fermented. Sometimes (if you’re really lucky) it’s bubbly and wild. There is nothing better than a jug of kimchi that needs to be stored over a rimmed container to catch bubbling juices.

Now just imagine if you will a bunch of this fabulous stuff chopped up, mixed into a batter and pan fried to form a crispy, savoury snack cake. Hello, gorgeous!

That wicked smell that accompanies kimchi transforms into a magical, alluring, irresistible smell when it is cooked. I whipped up a batch of kimchi pancakes at a local church during a children’s cooking class.

When I tell you this church is big, that doesn’t begin to tell you the size of the building. People were coming from all over saying, “What smells so good?”, “It smells like the best Chinese restaurant ever in here!”, “Whatever you’re making, can I try it?”

There were people who don’t venture past meat and potatoes asking for a taste. It’s like a siren song, it’s Rumpelstiltskin spinning kimchi into gold. In short, it’s what you want to eat. In abundance.

And no one will ask you to leave the building, but they might ask you to share.

Use this skillet to make kimchijeon

I love this heavy-duty skillet for making my kimchi pancake, but you can use any 10-12 inch cast iron skillet or a heavy-bottomed stainless steel skillet of equivalent size. 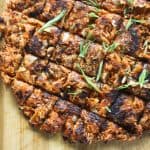 Kimchi undergoes a magical transformation in this crispy, savoury snack cake from something for die-hard lovers only to something that even unadventurous eaters want to try. Beware, though, this is so good it's habit forming!
Author Rebecca Lindamood