Spinach and Garlic Alfredo Pizza (With or Without Onions and Anchovies) 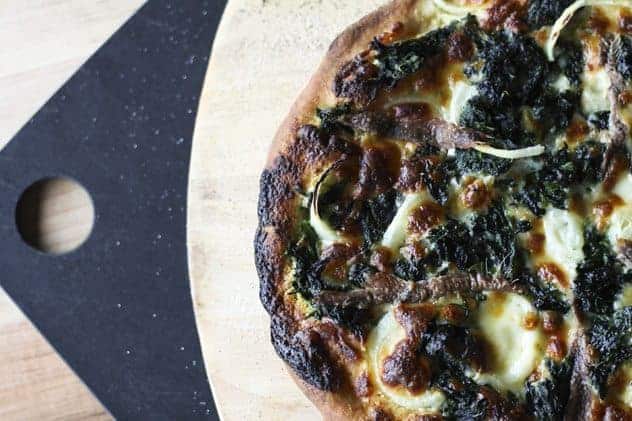 Monday, I declared this week to be Pizza Week. Today is the first pizza in the series. All of these pizzas will use the No-Knead Whole-Wheat Semolina Pizza Dough recipe I posted Monday.

I’ve played around with white pizzas over the years but until recently was never blown away by the results. The solution was two-fold.

I have to tell you that Alfredo sauce is my six-year old’s specialty in the kitchen. Granted, I measure the ingredients into a bowl for him, but he does all the grunt work. He whisks the ingredients together while I work on pizza crusts. We’re a well-oiled team. Actually, we’re a well-buttered team. The Alfredo sauce is pretty buttery. And creamy. And cheesy. This is mainly due to the fact that Alfredo sauce is made almost entirely of butter, cheese, and eggs with heavy cream thrown in for good measure. Because really, butter, eggs, and cheese aren’t rich enough on their own. Oy.

To that rich, velvety, hubba hubba base, we add a touch of garlic, parsley and black pepper. Voila! You have a sauce that makes pizzas sing and pasta weep with joy. It also makes a pretty darned irresistible perfume if you’re married to someone like the guy I married!

Speaking of things that my husband can’t resist, I must broach the subject of anchovies. Full disclosure: I am an unapologetic anchovy cheerleader. I love them. I adore them. I pink puffy hearts love everything about them. I do know, however, that not everybody is in my camp. If the thought of the hairy, spooky little fish fillets on your pizza skeeves you out, might I suggest that you chop at least one and add it to your Alfredo sauce? You will be shocked -SHOCKED, I say- at the subtle boost the presence of the little fishy adds. If you just can’t leap that hurdle, mentally, it’s alright. I’m still here for you. I am still going to dangle anchovies proverbially in front of you from time to time until you feel brave enough to try them. That’s right. I am big sister to the world.

In short, if you don’t like anchovies and onions, don’t put them on the pizza.

…And since we’re on the subject of dangling things in front of people until they try them, let’s talk spinach. My kids –thanks to a friend who fed them spinach in my absence– are pretty keen on spinach. Even two of the founding members of my anti-veg contingent like spinach. Proving the aforementioned friend’s theory right again, combining spinach and Alfredo sauce on this pizza is -at least in my imagination- probably what it was like when someone first stuck a chocolate bar in a jar of peanut butter. Heavenly angels singing comes to mind…

We can’t forget to talk about the crust! I made many promises about this crust in the post with the dough recipe. I cut the pizza and The Evil Genius swooped in (sans cape) to snatch the first piece after I photographed it. 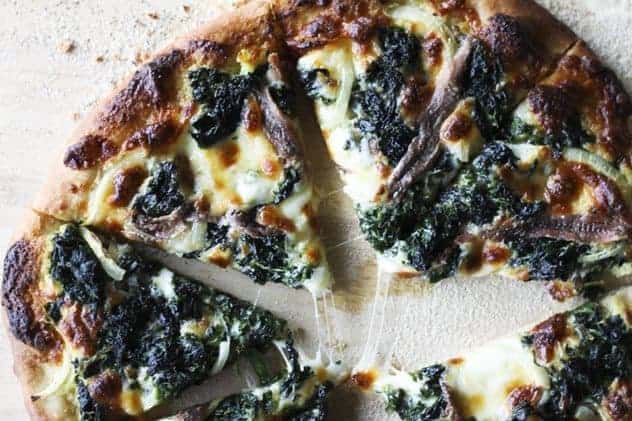 He declared, “You must show them a picture of the bottom of the crust. That’s the key! That’s how they’ll know this is one crust to rule them all.” And to further drive his point home, this man -the one who I am convinced wears a hat in order to have something to pull over his face when I aim the camera at him- offered to hold the pizza up (after taking a bite, of course) and let his hand be in the picture. It’s a banner day people. I present to you “Perfect Crust in a Manly Hand”. 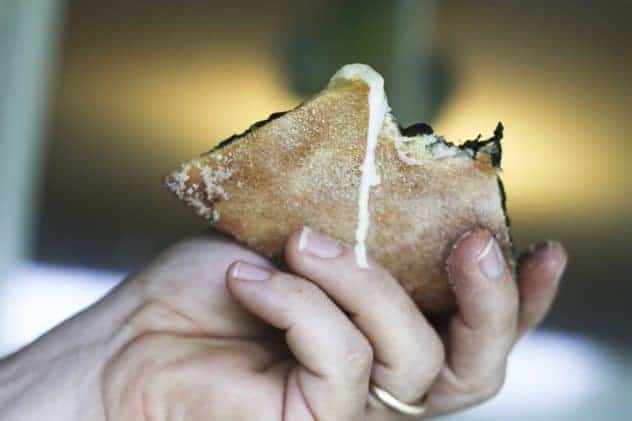 Now let’s make a pizza -an AWESOME pizza- together, shall we?

Spinach and Garlic Alfredo Pizza (With or Without Onions and Anchovies)

Rate Recipe Rebecca Lindamood
Prevent your screen from going dark
Print Recipe Pin Recipe
The perfect pizza dough is topped with a creamy, rich Garlic Alfredo, spinach, and mozzarella (and anchovies and onions in our house!) and baked to crackly crisp perfection with little charred bits on the crust and golden brown cheese. This is one white pizza to rule them all!

For the Garlic Alfredo Sauce:

To Make the Garlic Alfredo Sauce:

To Make the Pizza: