Soup. It’s magical, isn’t it? While it bubbles and simmers and infuses with any of a host of lovely flavours, the anticipation has the power to transform a stressed out heart into one that is pretty darned psyched about what’s to come. I know it isn’t just me. How could anyone remain unmoved in the presence of so many tasty options?

In the wide, wonderful soup world, I tend to gravitate toward the ones filled with goodies… I want some interest, some texture, something on which to chew proverbially and literally. I have quite a few great, last-minute recipes (see here, here, and here, or my recipe index) , but from time to time, I want an old-school, all-day, boy-was-that-worth-it soup. Mexican Chicken Soup {Caldo de Pollo} is just such a soup. 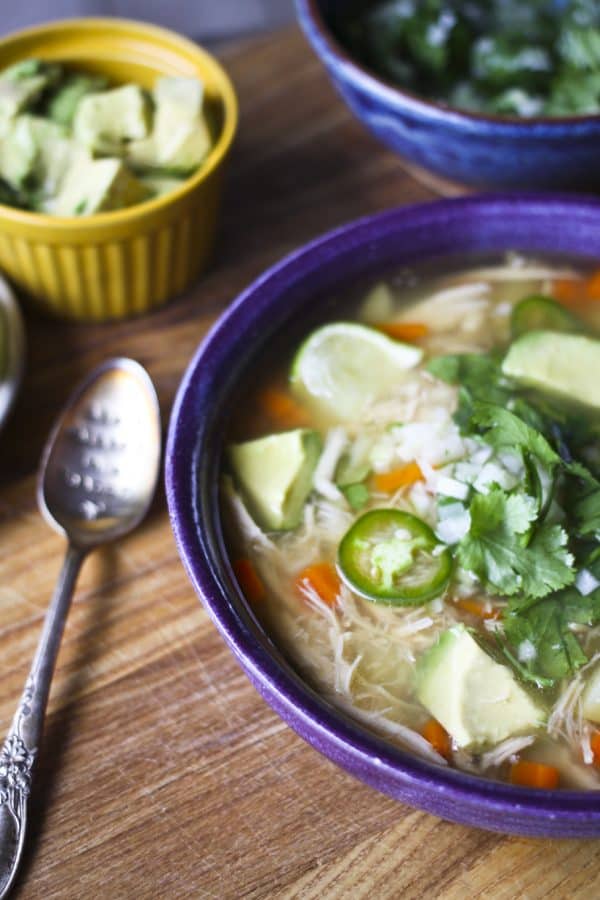 I’m going to tell you straight up; this is going to take a commitment of time. It’s not difficult, it’s not complicated, it isn’t fraught with timing issues, and it doesn’t require babysitting; it’s just slow. Isn’t that nice somehow, though? You toss goodies in a pot and let it simmer and develop itself into something that transcends all of its individual components. It’s the culinary equivalent of your mom shoving you into a chair, pulling a blanket up under your chin, and telling you to relax while she takes care of things. It’snot that you napped or your mom washed your dishes or walked the baby or swept your floor or put away your laundry, it’s that you had room to breathe and a better place in which to stand up after resting. Not that I’m advocating standing in soup. Lousy analogy for a mom who’s helping their kid study for the SATs, but do you see what I mean? It’s all love!

The beauty of Mexican Chicken Soup -much like my beloved Pho- shines in the melt-in-your-mouth tender vegetables and chicken falling apart in flavourful, hot broth, and the fresh crunch and vibrant flavours of the herb and jalapeno garnishes. It manages to be hot and comforting and fresh and WOW all at the same time. There aren’t a lot of foods that can hit those notes all at the same time.

Mexican Chicken Soup is made in two stages. Making the broth is Stage 1 and the soup is Stage 2. 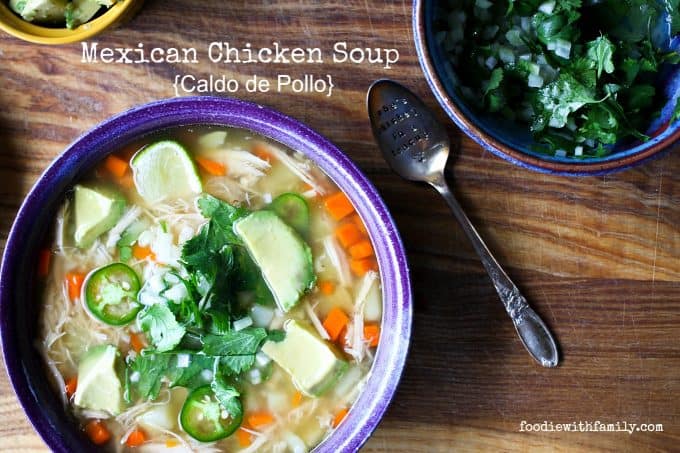 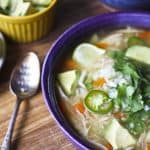 The beauty of Mexican Chicken Soup -much like my beloved Pho- shines in the melt-in-your-mouth tender vegetables and chicken falling apart in flavourful, hot broth, and the fresh crunch and vibrant flavours of the herb and jalapeno garnishes. It manages to be hot and comforting and fresh and WOW all at the same time.Inspired by my good friend, Liz of The Lemon Bowl.
Course Soup
Cuisine Mexican
Prep Time 15 minutes
Cook Time 20 minutes
Servings 8
Calories 416 kcal
Author Rebecca Lindamood

To Make the Broth:

To Make the Soup:

To Make the Cilantro Onion Garnish:

To Serve the Soup: