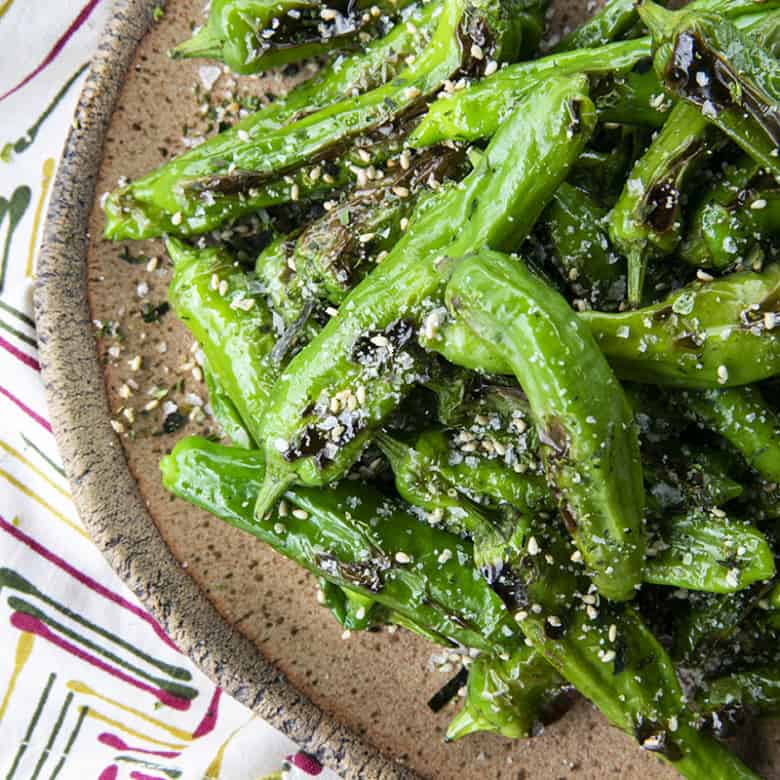 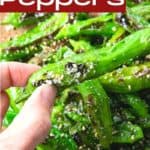 Pan fried or grilled and lightly seasoned, shishito peppers will be your new go-to appetizer. Whether you serve them with grilled or pan fried beef, fish, chicken, or as a snack to accompany beer, you’re going to love them!

You may already love these fun little peppers but want to know how to cook them at home. I’ve got you covered any which way!

Shishito peppers are small, vibrant green peppers with a wrinkly surface and thin walls. They cook in no time at all and are a super easy, impressive appetizer, side dish, or snack.

Shishito peppers -or Capiscum Annuum- originated in East Asia and are a popular accompaniment to beer in Japan there. They were popularized in Japan and Korea, where they are known as kkwari-gochu (or groundcherries) because its wrinkled surface resembles groundcherries.

Before we get to how to cook shishito peppers, it helps to know a little bit about what to expect when you bite into them. That is where the fun starts.

Here’s what you need to make Shishito Peppers:

9 out of every 10 to 20 shishito peppers are pretty mild; ranging from about 50 to 200 Scoville Heat Units (you can learn more about that listening to my podcast episode here.) Considering that jalapeños start at 2,500 and can range up to 10,000 SHU, that’s pretty chill for a chili pepper.

That 10th pepper can’t be identified by looking at it; at least not that I’ve found. It’s enough to make your tastebuds tingle and make you come back for more, but it most definitely is not a face-melting level of spice.

And even when you DO get a doozy of a pepper, the heat dissipates really quickly. I’d liken it to the burn you experience from horseradish. It’s briefly intense but drops quickly!

So in answer to the question “are shishito peppers hot?” I’d have to say no. Most of the time.

How to cook shishito peppers is a matter of personal preference. Most folks cook them quickly in a screaming hot pan or grill them.

You have a couple of options on how to cook shishito peppers, but whichever you choose, you’ll want to poke a small hole in the pepper before cooking. The small hole prevents the peppers from exploding from a build up of steam inside when they cook.

While the hole-poking is not strictly necessary, it does give you a more aesthetically pleasing finished shishito pepper recipe. While we’re on the subject of how to cook shishito peppers, let’s talk about those options.

Whenever asked how to cook shishito peppers, I always recommend making blistered shishito peppers. This is far and away my favourite method for ease of preparation and for flavour.

It’s a ridiculously easy process. All you need to do is get a very heavy frying pan -preferably cast iron but stainless steel will work- screaming hot. Carefully swirl a little oil in the pan and toss in clean, dry shishito peppers with a little hole in them.

Shake the pan around, flip them with tongs after a minute or so, then transfer to a plate. Drizzle or spray with a little soy sauce or liquid aminos, sprinkle with some coarse sea salt like my well-loved Maldon flakes, and eat with wild abandon.

An ice cold beer or iced tea is optional, but awfully nice. These blistered shishito peppers or grilled shishito peppers would also be lovely with a Watermelon Margarita a.k.a. Sandia En Fuego or Pure Sweet and Puckery Lime Sorbet and Summer Shandy Beer Floats.

And if you are looking for ideas on what to serve these grilled shishito peppers with, look no further than our Korean Barbecue Grilled Flat Iron Steak, Crispy Smoked Chicken Wings or Smoked Whole Chicken. You can pop the shishito peppers on the grill while you’re making the grilled steak or crisping up the chicken!

Grilled shishito peppers are how to cook shishito peppers if you have your grill already going and don’t feel like messing with a pan. I still prefer blistering them in a pan, but the grill is a great second option.

The bonus to making grilled shishito peppers is that when you skewer them (for ease of turning on the grill) you’ve already pierced the pepper to allow steam to escape. The downside is that you’ll want to soak the skewers for 30 minutes before grilling if using bamboo skewers.

If you opt for metal skewers, no pre-soak is necessary. It’s probably obvious which type of skewer gets my vote.

For grilled shishito peppers, you toss the peppers with the oil you’d use were you making blistered shishito peppers in the pan, then skewer them. Grill over high heat or hot coals for about 5 minutes per side, or until blistered all over and charred in places.

Remove the skewers from the heat, slide the shishito peppers onto a plate, season with soy sauce and salt and serve immediately.

How to Cook Shishito Peppers in a Pan

Pierce the peppers by running through from side to side with a skewer or toothpick. Set aside.

Place a heavy-bottomed cast-iron or stainless steel skillet or frying pan over a medium high burner. When you can feel heat rising from the surface of the pan by holding your palm near it, carefully swirl the oil over the bottom of the pan.

Add a single layer of the peppers and shake the pan to distribute them, but then leave the pan alone and do not stir or shake it until you hear sizzling and popping, about 1 to 2 minutes. Use tongs to flip the peppers over once the bottoms have blistered and have some charred areas.

Repeat until sizzling and popping occurs, about 1 to 2 more minutes. Transfer to a paper towel lined plate to blot off any excess oil then to a serving dish. Salt or sprinkle generously with furikake or flaked sea salt.

How to Make Grilled Shishito Peppers

Arrange the skewered peppers on the hot grill. Grill until you hear sizzling and popping and the bottoms of the peppers are blistered all over and charred in places, about 2 to 5 minutes, depending on your grill’s heat.

Use tongs to flip the peppers over. Repeat until sizzling and popping occurs and the other sides are blistered and lightly charred, about 2 to 4 more minutes. Slide the peppers onto a serving dish.

Season with soy sauce or liquid aminos and sprinkle with flaked sea salt or a generous amount of furikake. 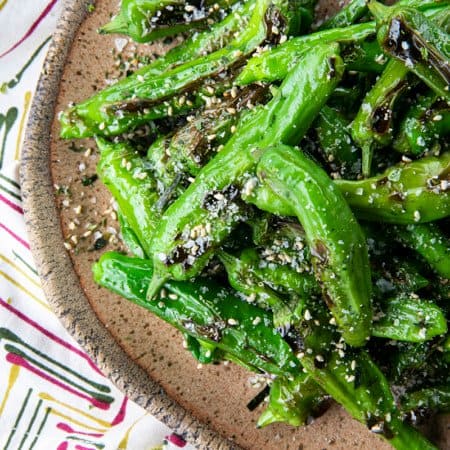 Rate Recipe Rebecca Lindamood
Prep Time 2 mins
Cook Time 5 mins
Total Time 7 mins
Prevent your screen from going dark
Print Recipe Pin Recipe
This quick and easy method will teach you how to cook shishito peppers perfectly and easily. With this shishito peppers recipe under your belt, these savoury, deliciously addictive blistered shishito peppers will become a favourite side dish or snack with beer and cocktails!

How to Cook Shishito Peppers in a Pan

How to make Grilled Shishito Peppers