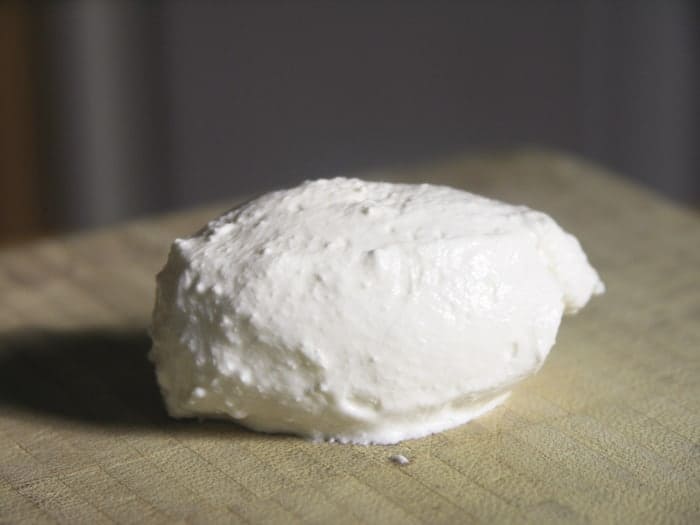 A Tale of Two Mascarpones:

It was pretty clear from the response to the Blueberry Tiramisu post that you all are a bunch of fellow mascarpone lovers. And I know how expensive it is as the stores, so I’m thrilled to pass along just how easy and inexpensive it can be to make at home. Sounds like a great start, right?

Not to be confused with a big butt although that is a present and looming danger if you eat the entire batch of mascarpone at once. Butt I digress.

I  sat down to write this post prepared to tow a line that makes me struggle. I was going to give you a recipe for the most hyper-traditional mascarpone a body can make. Because sometimes -if I’m being fully truthful- I think I should be fancier and more traditional than I actually am. I have to continually check myself (and my burgeoning ego) and remember that the point is not whether I did it like someone’s Nonna in Abruzzi; the point is that I made it. Hello.

There are entirely too many times in life when we have to do things a certain way to avoid disaster, health crises, heartbreak, financial ruin, etc. This is not one of them.

‘Authenticity’ is a term that is applied to food a little too strictly for my comfort. According to the ‘noisiest authorities’, food can only be authentic if it is prepared in the most traditional way with the most traditional ingredients to meet a strict definition of what the food is or isn’t. To wit, mascarpone. Prepared in the most authentic way, mascarpone requires Tartaric Acid. This stuff:

Tartaric Acid is derived from the skins of grapes. It’s harmless; it’s used in winemaking (and mascarpone making) and has been for a very, very long time. It’s pretty mild stuff, very inexpensive, keeps forever. Mucho authentic. And a  large pain in the rear.

What? Yes. I think it is a major, massive, mond0, big, huge, giant pain in my tuckus. I have made mascarpone in the most traditional way at least 25 times over and it always requires more scraping of cheesecloth, more ‘hang time’, more fine tuning of the final product than I feel like giving it.

Authentic can blow it out it’s ear as far as I’m concerned.

I have a shortcut I like and I’m darned if I’m not going to share a shortcut with you just because it isn’t authentic. Besides, my recipe is foolproof and every bit as delicious and creamy as authentically made mascarpone. And my way has an advantage; it has longer shelf-life in the refrigerator than traditionally made mascarpone because it’s cultured! The cultures help preserve the cream so you can make a bigger batch at once; this translates to more mascarpone on hand. How can that be a bad thing?

Either way you make it -Foolproof or Traditional- you’re going to yield about 2 pounds of mascarpone for less than $6.00. So either way, you win.

For a printer-friendly, photo-and-culinary-angst-free version of these recipes, click here!

Yield: about 2 pounds of mascarpone

Pour the Half and Half or Light Cream into the saucepan placed over low heat. Warm gently to 86°F (this is lukewarm.)  When it reaches 86°F, remove the pan from the heat. If you’ve gone slightly over temperature, don’t panic. Simply stir a few times and cool it back down to 86°F before proceeding.

If using the packet of direct set culture, sprinkle it evenly over the top and allow it to rest for 1 minute. If using the buttermilk/water/rennet mixture, pour into the warm cream and let it rest for 2 minutes. After the resting time, gently whisk the cream for 2 minutes, or until the culture is completely dissolved. Cover and let set in a warm place (about 72°F- give or take a few degrees) for 12-24 hours or until thick. If you stop here, you’ve made Crème Fraîche. But I’m talking mascarpone today…

To make Mascarpone of your Crème Fraîche requires just. one. more. step. Transfer the Crème Fraîche to a fine-mesh strainer lined with dampened  fine mesh cheesecloth or dampened coffee filters.

Place the strainer over a bowl and allow to drain at room temperature for 6-12 hours, or until it reaches your desired consistency. Voilà! Mascarpone! At a fraction of the cost of store bought and a fraction of the fussiness of traditionally made mascarpone.

…For comparison’s sake, I’ll share the traditional way to make it as well. While the traditional method appears easier, I have always found that I needed to fuss with it more. I always have to scrape around the edge of the cheesecloth with a silicone spatula to help release some of the liquid. I always find it has to drain significantly longer than the normal 12 hours. And maybe, just maybe, I’m messing it up, but if I am, at least I’m consistent about it. I’ll stick with the method that works for me. Novel idea, I know.

If you prefer the traditional recipe, by all means, make it! I’d love to hear from anyone who decides to try both. If you’re an old hand at making traditional mascarpone and you have some tips for me, please share them. I’d really love to have two foolproof methods.

Yield: About 2 pounds of mascarpone

Add cold water to the bottom pan of a double boiler but not so much that the top pan floats. Fit the top pan in place and add the cream. Over medium heat, bring the cream up to 185°F.

Sprinkle the tartaric acid over the top and stir for 5 minutes, maintaining 185°F. The cream should thicken immediately. Remove the top pan from the double boiler and stir for two additional minutes.

Transfer to a dampened ultra fine cheesecloth or dampened coffee filter lined fine-mesh strainer and allow to drain in the refrigerator for 12-24 hours or until it reaches the desired thickness. This is very perishable and must be consumed within 48 hours of being made.