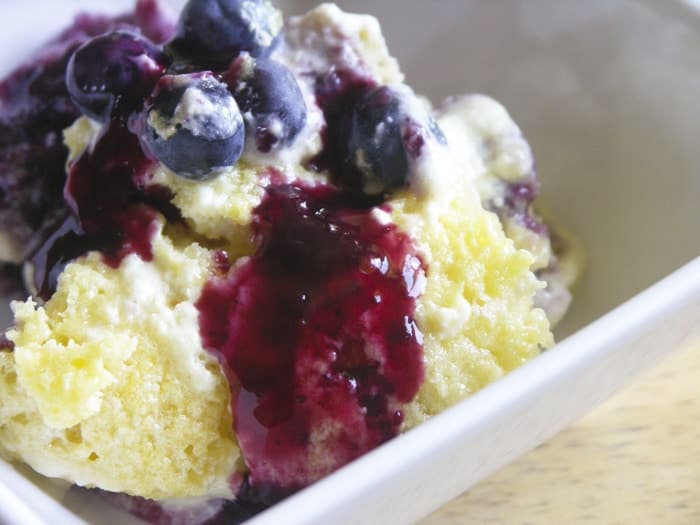 Truthfully, this dessert should be called ‘Why I almost ceased being a dog-owner’. But I’ll start at the beginning…

A good friend -who shall remain unnamed since she played hooky from work to come play in the kitchen with me- and I spent a couple hours working on this masterpiece. We made the ladyfingers from scratch. The mascarpone cream? It was made of homemade mascarpone* and eggs from my chickens. The blueberry compote was crafted from blueberries that the boys and I had picked and frozen last August. The homemade orange syrup for dunking the cookies was mixed with equally homemade Grand Marnier*.

We assembled our tiramisu, popped it in the refrigerator and sat on easy chairs with our feet up to solve the world’s problems over a cuppa the finest. Well, we tried anyway. We didn’t get a whole lot further than discussing whether Kevin Gillespie (from Top Chef) was every bit as cool as he seemed on the show or whether he was actually cooler. (Result: Cooler. Definitely.)

We helped ourselves to dainty servings -due mainly to the fact that we ate the entire time the tiramisu ‘settled’ in the chill chest-  and ate it in raptures.

While I waved good-bye to *Whoops! Almost said her name!* I fantasized about the size of the serving I would eat after the boys were in bed for the night. I had it all planned out.

I would put a fluffy down blanket around my shoulders and tuck myself into the corner of the couch with a sinfully large bowl of the tiramisu and my copy of “Right ho, Jeeves!”

The Evil Genius came down from his lab and grabbed a large bowlful of tiramisu. Since it was a bitterly cold day, he popped the lid on the trifle dish and sat it out on the porch to stay cold. Then ‘it’ happened. He leapt from his chair and ran toward the door with a look of panic on his face. The cause of alarm became clear when I heard two things at the same time; Monsieur Evil yelling, “HAMBONE!” and the sound of a trifle dish skittering across the porch floor.

My 85-pound hound dog who is not under-fed by any stretch of the imagination ate my tiramisu.

And I have never wanted to own a dog less in my entire life. Unless you count the time he ate my triple batch of lemon curd…

My plans for the evening flew out the front door along with a few well-aimed expletives at the dog.

My mother asked the next day whether the dog had experienced any discomfort from eating the better part of a very rich dessert. My response?

At least I got a couple pictures to help me mourn…

For a printer-friendly version of this recipe minus the dog-related sob-story and pictures, click here!

Ingredients for ‘The Dunk’:

This is not complicated, but it helps streamline the process if it is done in order. To simplify, I’ll number each step of the process.

1. Begin by creating the syrup that will be used to moisten the ladyfingers; referred to hereafter as ‘the dunk’. Add the cup of sugar to the cup of water in a small saucepan. Stir until the sugar is dissolved and bring to a full-rolling boil. As soon as it begins boiling, remove from heat. Make several cuts in the clementine or tangerine so that it is sliced deeply enough to release some of the juice, but not deeply enough to break up the fruit. Gently drop the clementine into the syrup, cover with a tight fitting lid and let it steep and cool for 30 minutes. After 30 minutes, fish the fruit out, gently squeeze over the bowl and discard the fruit. Pour syrup into a mid-sized bowl, stir in the Grand Marnier and place in the refrigerator to chill completely…

2. Make the blueberry compote. In a small bowl, stir together the 1/2 cup of sugar and 2 Tablespoons of cornstarch or arrowroot powder. Toss with the blueberries and orange zest (or orange extract) in a medium saucepan. Add the water and stir over medium-low heat until the blueberries start to give up some of their juices. When there is more liquid in the pan, raise the heat to medium or medium-high and continue stirring until the blueberries begin to burst and simmer. Allow to simmer for 3 minutes, stirring constantly. Remove from the heat and chill in the refrigerator until cold all the way through.

3. Prepare the mascarpone cream. Carefully crack and separate the yolks and whites from your large eggs. Place the yolks and 3/4 cup of sugar into the bowl of your stand mixer or a large mixing bowl. Using the whisk attachment, whip on medium-high speed until the yolk mixture looks thick, creamy and light-yellow. Add the mascarpone all at once and whip on medium-high speed until evenly combined, about 2 minutes. If using the stand-mixer, transfer to a large mixing bowl and set in the refrigerator. If using a large mixing bowl and hand-mixer, simply put the bowl into the refrigerator and turn your attention to the whites.

Mega Important Tip: If you are using the stand-mixer, carefully wash and dry the bowl and whisk attachment before proceeding!

Whip the egg-whites on high with the whisk attachment on your stand mixer until they form soft peaks. (In other words, when you raise the whisk from the egg whites it should form a little curlicue on top that looks like the tip of a warm Hershey’s Kiss.) With the mixer still running on high, add the remaining two tablespoons of sugar. Run for one minute, stop the mixer to scrape down the sides, and return to high until firm peaks form. (This means that when you raise the whisk from the egg whites, you should be able to recognize exactly where it left the egg whites and there should be no droopy curlicue. The whites should be very shiny and glossy at this point.

Use a spatula to scrape about 1/3 of the beaten egg whites onto the mascarpone mixture. Use a whisk to incorporate the whites. This lightens the mascarpone cream a bit so that you can more easily fold the remaining whites into it. Scrape the rest of the beaten whites onto the mascarpone cream. Use a rubber or silicone spatula to fold the whites into the cream. Don’t panic! While it sounds futzy, it’s really easy to fold egg whites into heavier mixtures. The best way to do this is to picture your mixing bowl as a clock. Insert the spatula, blade side down, into the center of the mixture and gently plunge it to the bottom of the bowl. Pull the spatula back toward six o’clock. When you hit the edge of the  bowl, rotate the spatula so that the flat part scrapes against the bowl. Turn the spatula back blade side up at a 45-degree angle. Lift the spatula, and the contents on top of it and gently turn it over. Rotate the bowl about 15 minutes (a quarter turn) and repeat until there are no little white ‘clumps’ of egg white remaining. By this point, you should have an even, creamy and fluffy mascarpone cream. Place this, lightly covered, into the refrigerator until you’re ready to proceed (but no longer than an hour in advance!)

4. Time to assemble! Plunge the ladyfinger cookies, one at a time, into ‘The Dunk’ and count to 2. Lift for an additional 2-count to let extra syrup drip away and then arrange cookies snugly over the bottom of your trifle dish or serving dish. Scoop about 1/4 of the blueberry compote onto the ladyfingers and spread toward the edges. Top with 1/4 of the mascarpone cream and spread toward the edges. Repeat the layers -dunked ladyfingers, blueberry compote, mascarpone cream- until you run out of one item or space to fill. Tightly cover the dish and refrigerate for at least 2 hours prior to serving.

5. The payoff: time to eat! Scoop into serving dishes and eat as is or garnish with fresh blueberries and orange zest.