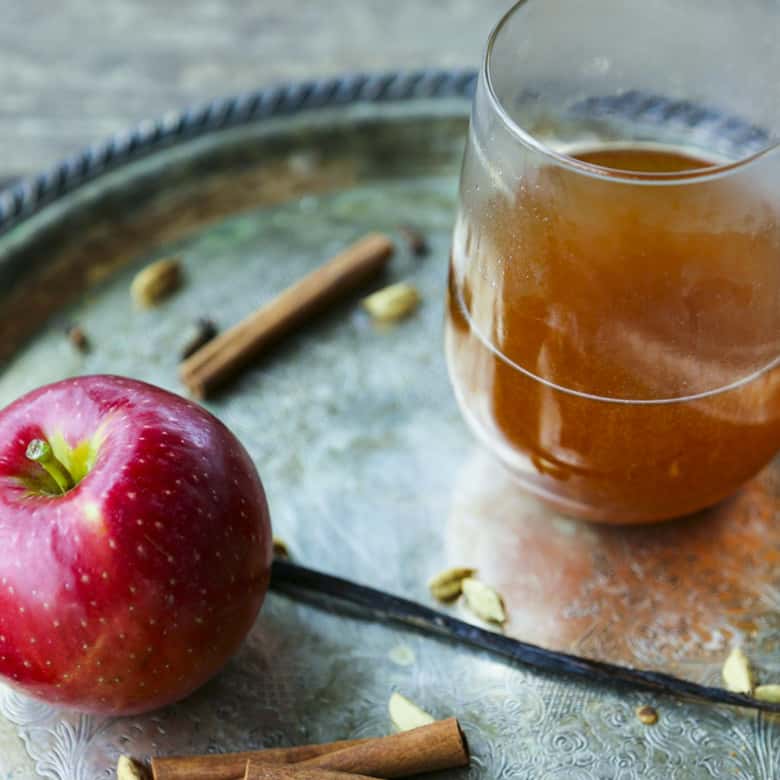 This slow-cooker mulled apple cider slow-simmers with cinnamon, cardamom, nutmeg, and vanilla plus a little lemon to accentuate the apple, and is sweetened just enough with maple syrup. It’s the best mulled cider you’ll ever have and you’ll want it for all your fall gatherings.

I always wanted to love mulled cider, but in practice, I usually found it cloyingly sweet and over spiced. I wanted the character of the apple cider -such a beautiful, seasonal treat- to shine through. But with all the added sweet stuff and overpowering spices, it just got lost.

I issued myself an order to make a mulled cider I loved, and I’m happy to say that I made a mulled apple cider I love madly. Meet the very best Mulled Apple Cider you’ll ever drink.

Spiced, warm, and slightly sweetened with maple syrup, our Best Slow-Cooker Mulled Cider is just different enough from your average mulled cider to be memorable. A gallon of it disappeared like free money when I took it up to the ballet conservatory where my son attends. The kids and parents alike loved it.

Mulled Apple Cider is a hot cider drink that is infused with warming fall and winter spices. Some call it wassail although wassail is usually made with beer or ale.

Can you think of a nicer treat to warm up to on a cold fall or winter evening? What’s even nicer is that once you’ve mulled your apple cider, you can store leftovers in a jar or cool it off and return to the original apple cider jug and keep it in your refrigerator.

It’s a matter of mere moments to reheat the mulled cider for a delicious, warming treat. That is, if you have any left!

Mulled Cider is traditionally made by simmering a clove studded orange and some cinnamon sticks in apple cider and is sweetened with brown sugar. Our version uses orange or lemon slices for better flavour infusion and substitutes maple syrup for the brown sugar.

And instead of studding an orange or lemon, I either toss the spices right into the slow-cooker or slide them into a fillable tea bag. The tea bag isn’t necessary, though, because the spices fall to the bottom of the slow-cooker as the cider mulls and are easy to remove or strain out.

In addition to whole cinnamon sticks and cloves, we add whole cardamom pods to the party. Cardamom pods are seed pods from relatives of the ginger and turmeric family, making them a wonderfully fragrant and warming spice.

You can toss the pods in whole or tap them lightly with a heavy pan to help release more of their essence into the cider as it simmers and infuses. Either way is fine!

You can buy whole cardamom pods in well-stocked grocery stores or online. The beauty of cardamom pods is that unlike ground cardmom, these pods last nearly forever when stored in an airtight container like this one in a cool, dark place.

Likewise, we add a little interest in the form of one 2-inch piece of vanilla bean. You don’t need to sacrifice an entire vanilla bean for this mulled apple cider, a little segment perfumes the entire batch perfectly!

You’ll want to keep whole cinnamon sticks, vanilla beans, and whole cloves, which are also all available online, on hand in addition to those cardamom pods for last minute cravings.

Our Best Slow Cooker Mulled Apple Cider is a great party option. Prepare the night before the party and strain into an airpot in the morning.

You can stir the maple syrup directly into the syrup in the airpot. If you’re looking for a great airpot, I own and recommend this one, but there are many other affordable options out there, too.

This is a great option for all ages, but if it’s an adults-only get together, and you wish to do so, it is smooth and wonderful mixed with rum or apple brandy!

And if you’re just a big cider fan in general, you should try our Bourbon Apple Cider, Apple Cider Pulled Pork, and Pumpkin Spice Cake with Maple Frosting + Cider Caramel.

Combine all ingredients except the maple syrup in a slow cooker, cover, and let go 8 hours or overnight. The cider solids will fall down to the bottom.

Scoop the cider carefully, trying to avoid stirring up the sediment from the slow-cooker into a fine mesh sieve over a pitcher or thermo or airpot. Stir in the maple syrup. Serve hot as is or with rum or apple brandy added. 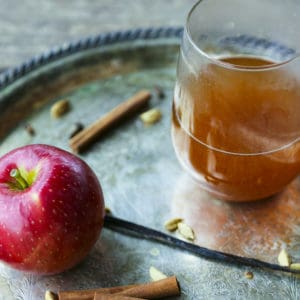 This post was originally published November 2015 and republished in October 2021 with improved information and notes.