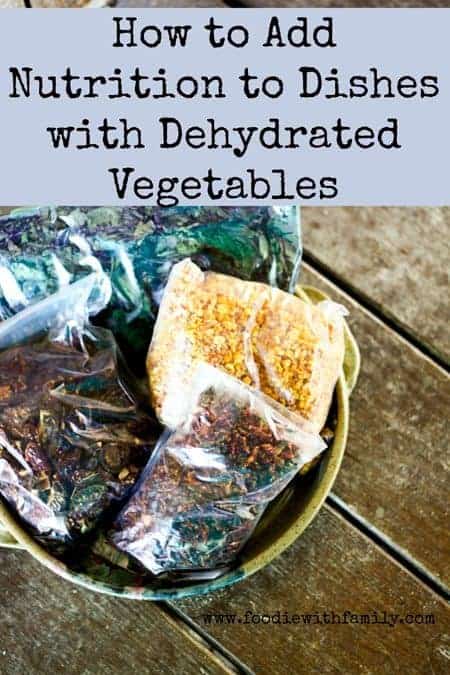 Over the years, I’ve had quite a few people ask me how to get  their picky kids’ to eat vegetables. I have finally decided to address it, but before I get into that, please allow me to backtrack a moment.

I had it going on, friends. My two eldest boys would try everything and anything I put on their plates without balking. I was puffed up with all kinds of pride. If they didn’t like it, the guys would even take four or five bites before making up their minds and asking politely if they could be excused from the rest of what I’d put on their plates. I thought I had the formula down pat. Then came boys number three, four, and five, who taught me that I was living in a dream world.

These guys gave picky an adorable and immovable new face. Number Three established himself as Mr. British Pub Grub; he was thrilled if there was meat (sausage, primal cut, or shredded), potatoes, and the occasional corn or pea. Gravy? You betcha, but nary a fruit would pass his lips. Number Four was the fruit-i-tarian. He would eat any fruit -fresh or cooked- but preferred fresh. He was anti-vegetable to the extreme; no mashed potatoes, baked potatoes, corn, peas, or anything that wasn’t a French fried spud, and EGADS- no gravy. Number Five threw us all for a loop with his no veg/no fruit policy. He was okay with (paradoxically) French fries and the occasional Purple Cow Smoothie, but anything with texture beyond a glass of milk, hot dog, or hamburger was verboten.

I don’t mind telling you I was shocked and befuddled.

I tried every kind of method known to mankind to get vegetables into Numbers Three, Four, and Five. I cajoled, reasoned, limited choices, expanded choices, introduced fifty billion times, and straight up threatened. None of them worked. Number Three informed me, “Mama, it’s texture. I don’t mind if you put stuff in there if I can’t tell it’s there.”

…Thus began my wizardry at hiding vegetables. Anything that resembled a dried herb was a-okay with this crew (WHAT?!? Doesn’t matter. It works, so work it.), so I added dried herbs in abundance. If I grated carrots, zucchini, onions, and more with the food processor or on the cheese grater, then pulverized it in the food processor and added it to ground meat as it was browning, that was fine and dandy, too.

Branching out from these easily hide-able veggies was the challenge, though. The answer came in the form of an off-the-cuff observation by my stepmom, Valerie. She mentioned that she had been buying vegetables on clearance,  dehydrating them, and adding them to soups, stews, and sauces. The lightbulb went off… If I dehydrated something and PULVERIZED it into a powder, NOBODY BUT ME WOULD KNOW.

Oh mercy. I have worked this six ways from Sunday. Dehydrated and smashed-to-smithereens bell peppers (any colour), corn, cherry tomatoes, zucchini, and potatoes made it into every seemingly innocuous soup, stew, and smooth pasta sauce I made. I was killin’ the veggie hiding.**

**Before anyone goes nutty over me ‘lying’ to my kids to get them to eat vegetables, I’d like to point out that they ATE THE DADBURNED VEGETABLES that way. It wasn’t long before they spotted me adding different coloured powders to foods and asking what I was doing. I told them. They were fine with it. In fact, they kind of dig the idea that they’re eating Astronaut Power Powdered Food. Ahem. You heard me.

The oldest of the anti-veg contingent knows EXACTLY what I’m doing and is happy to get the nutrition without having to actually experience the vegetable texture. I call this a win.

My challenge was getting green stuff in there. They had a Spidey-sense when I threw in the dehydrated and powdered broccoli, cabbage, and any other cruciferous, strong-flavoured veggies. Then just a week or so ago, my genius little sister, Jessamine, mentioned that she dehydrated extra beet greens from her garden and crumbled them into soups for extra vitamins and minerals. Holy moly. It’s pretty good to be related to smart people. 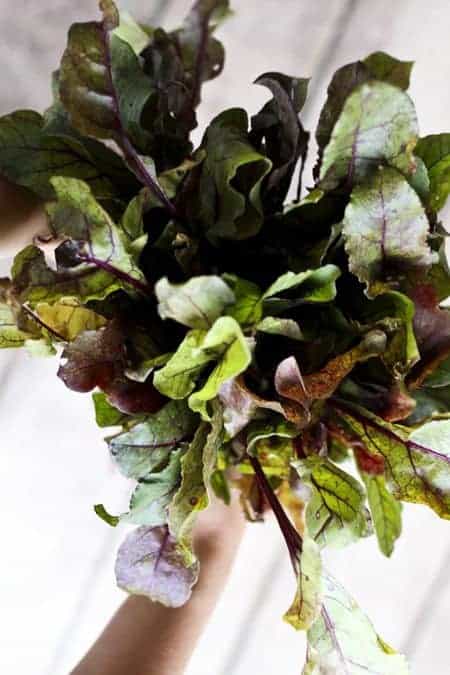 I went to my local farmers’ market and cleaned out the vendors’ beet greens (to the kingly tune of $2.00 for all of them.) If there had been kale and chard, I would’ve grabbed those, too. I came home, rinsed them, and popped them onto the waiting trays of my dehydrator. Eight hours later, they were crumbly dry. As I stuffed them into a zipper top bag, they shattered into a fine powder. Whoa. This was easier than I thought. I dreamt of mixing this into the ubiquitous spice blend for chili or sloppy joes, browned Italian sausage for pizza. I even dreamed a dream of tossing a tablespoon or two (which translates to an entire bunch of beet greens) into a smoothie!

Do I need a dehydrator to dry vegetables and fruits?

I’ll tell ya, I have a pretty fly dehydrator. I have this Excalibur 9-Tray Economy Dehydrator

which is, admittedly, a bit of an investment. (This is also an Amazon.com affiliate link. If you purchase it soon after clicking, I receive a small commission which in no way effects the cost of the item. You may find it less expensively on eBay or through other sources, so do your research! It’s worth it!)

To be fair, I have heard you can dry foods effectively in the oven if your oven has a 200°F or below setting. The truth is that I’ve never done a significant amount of oven-drying. This seems to be a good guide if you opt for that method. There’s little to no financial outlay to begin with, since you use a stove you theoretically already have, but I will caution you that it takes much longer and requires far greater attention than does the dehydrator method. Where a dehydrator takes from four to six hours for a bunch of green, an oven can take up to sixteen hours for the same batch. Plus, and this is a biggie, THE LOWER THE TEMPERATURE AT WHICH YOU DRY THE VEGETABLES, THE MORE NUTRIENTS THEY RETAIN! That makes the dehydrator a clear winner for me. 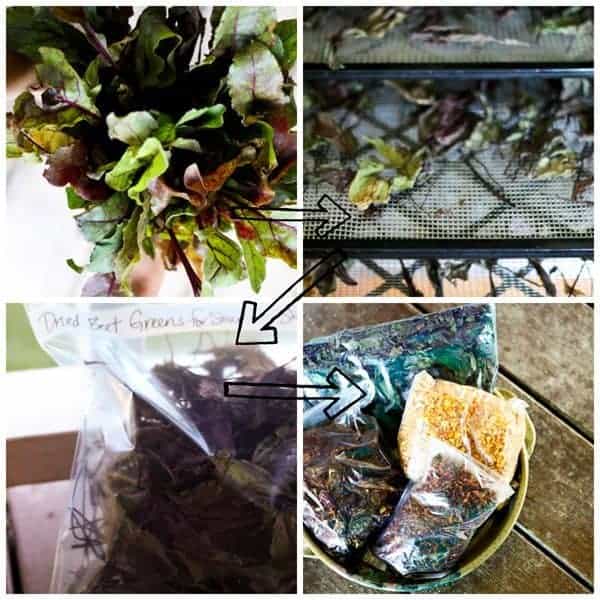 How do I make dehydrated vegetables?

To summarize, you remove anything inedible (stems, pits, seeds, skins on certain vegetables, etc…), break them down to a uniform thickness (usually 1/2 to 1/4-inch or less), lay them on the dehydrator trays (or racks on top of baking sheets if using the oven method), and dry ’em. Finer details: If you’re going to drop the dehydrated product into dishes to rehydrate, you want to pay a little attention to making the pieces uniform in size and shape. If you’re pulverizing them as I usually do, it doesn’t much matter what it looks like when it’s done.

Are there vegetables or fruits I can’t dehydrate?

Not really, it just depends on how strong your sense of smell and stomach are. Broccoli, turnip greens, and onions smell RANK while you’re drying them. If you MUST dry them, I recommend putting the dehydrator in the garage, barn, or outside on the porch or patio. You probably don’t want to sniff that all night long. Greens in general smell pretty earthy, but beet greens and mustard greens don’t smell as strong. They are milder and not unpleasant.

What gives? Where’s the recipe?

Today, there’s no hard core recipe; we’re dealing more with a concept than anything else. Get thee to your local farmers’ market and grab fists-full of beet greens, Swiss chard, kale, or spinach. Dry ’em. Crush ’em! Add ’em to everything! I advise you start with small additions to foods like soups, stews, gravies, etc… If it’s a wet food, it’ll accommodate the dried vegetables better. Just keep in mind that the vegetables that took longer to dry will, in all likelihood, take longer to rehydrate. If you’re adding them in powdered form, that is less of a concern. Let me recap the basic rules for adding dehydrated vegetables to food.

How to Add Nutrition to Dishes with Dehydrated Vegetables.

To what dishes can I add my dehydrated vegetable powders?

Do you sneak vegetables into dishes or are you feeding only non-picky eaters? Do you dehydrate any summer produce?