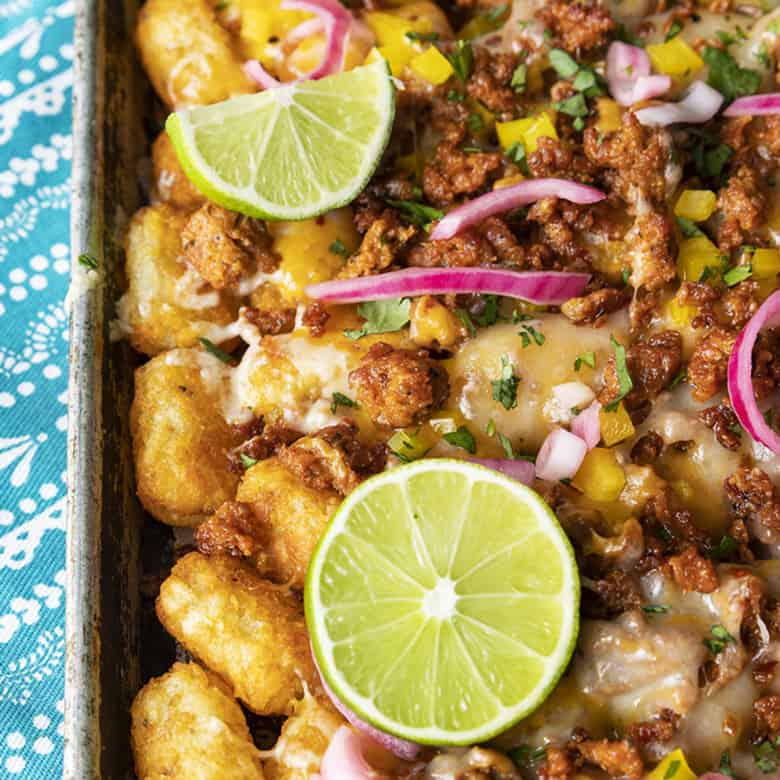 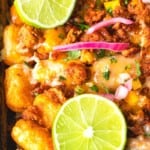 I have robust, cheese-laden and potato-filled recipe files, my friends. It’s so easy to please (and satisfy!) a crowd when you combine potatoes and cheese.

Today’s Totchos recipe is a perfect example of what I mean. One of the best parts of Tater Tot Nachos is that I can put the pan on a couple of trivets on the table without worrying over serving dishes and everyone is perfectly happy!

You start with plain old frozen tater tots baked until crispy and deep brown. You know it’s going to be good when you start with tots!

On the same pan you used to bake them, you cover them with a sinful quantity of grated cheese and a really naughty amount of browned Mexican chorizo then pop them back into the still hot oven.

When the cheese has melted to gooey perfection, you toss a fistful or two of pickled onions or chopped green onions and fresh cilantro or parsley. Add some diced bell peppers, if you’re so inclined. I usually am.

Voila! You have Totchos!

Of course, if you really want to slide to the back corner of the couch and tuck your legs up under you, you’ll want to serve this in a bowl. If you’re grabbing a bowl, you might as well dive into the deep end and dollop a bunch of cool sour cream on top of your tater tot nachos.

And if you’ve gone this far, why not go all the way and add some Smoked Paprika Chipotle Sauce over the top? You’ll be pretty pleased with yourself, if you do!

I love my totchos recipe made with Mexican style chorizo. I’m super keen on my homemade chorizo for this recipe.

If you’re not able to find or make chorizo, though, you can substitute 2 to 3 cups of leftover taco meat in our tater tot nachos.

Likewise, quick pickled onions are amazing on our totchos recipe. But if you don’t want to make them or can’t find them, green onions make an admirable stand in.

I am an extra sharp cheddar kind of gal for our tater tot nachos, because that tangy sharpness plays so nicely with the potatoes. I have subbed in half pepper jack cheese from time to time when I found I was low on cheddar and loved the results, too.

If you prefer your cheese more mild, feel free to swap in mild cheddar, regular jack cheese, or colby cheese. You can really use whichever cheese you like; just pick a nice melting cheese.

I’m especially in love with these tater tot nachos when they have a shower of freshly chopped cilantro on top. Add a couple of lime wedges to squeeze over them right before eating, and it’s totcho heaven! 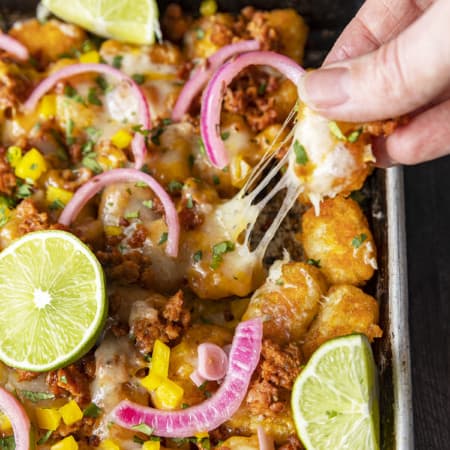 * Homemade Mexican Style Chorizo is the tastiest option, by far, but store bought can substitute nicely. Many stores offer Mexican Style Chorizo in casings. If this is the only variety you can find, remove the sausage from the casings and break it up in the pan. If using commercial chorizo, you may find you need to drain the browned sausage on paper towels before scattering over your totchos. **We prefer extra sharp Cheddar cheese, but sharp or mild may be substituted. Using half Cheddar and half Pepper Jack or Monterey Jack cheese is also tasty here!

This post was originally published January 18, 2014 and republished in March of 2022 with improved instructions and photos.