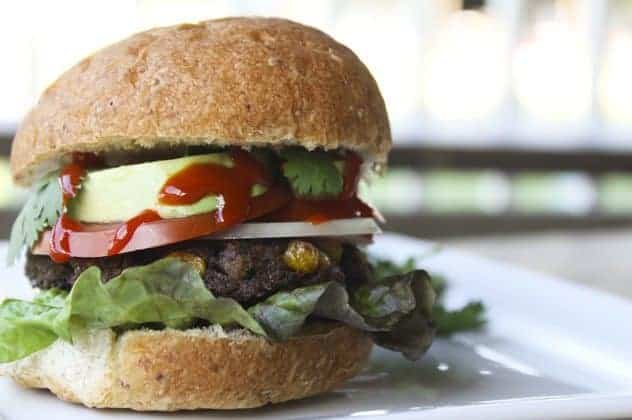 It’s time for another installment of ‘Tasty Penance’, wherein I give you something tasty and healthy to make up for, oh, I dunno, maybe fried bologna sandwiches? If compensating for every marginally bad thing we ever did was as delicious as these Taco Black Bean Burgers, we’d all be apologizing and making things right all the time.

First of all, how can you possibly go wrong with taco flavours? Hmmm? You can’t!* Second of all, it’s a burger which is an automatic win. Third, it throws and is cooked in about fifteen minutes. That’s good and fast. Fourth, it has avocados and lettuce and tomatoes and onions and hot sauce. Enough said, right? And fifth…

*Unless you’re putting taco toppings on a bowl of fudge brownie ice cream. I can see how that would be problematic.

Fifth is the most important for me right now. It is made without the use of the oven. Why would that be so important to the baking queen (that’d be me)? Because my oven. She is dead. Again. I am murder on baking ignitors, apparently. This is the fourth (or is it third? I don’t know. I just know it’s been more than two and less than six) ignitor I’ve blown out on my oven since getting it a little less than ten years ago. Darnit.

Luckily, the cook top is still working so pan frying is still an option and these burgers do not make me feel like I’m missing anything by not baking (except maybe a freshly baked bun, but I digress…) Now. Another word or several about these burgers.

*Confession: I leave a couple little patties free of corn for the ONE hold out on sweetcorn in my crew. Stinker. He’ll come around eventually, but in the meantime, I’m still getting him to eat a vegetable burger. I’m not sweating the sweet corn.

I’m grateful that all my kids love beans. I have to tell you, though, that it wasn’t always that way. A couple of them required convincing. And while I’m not proud of how I managed it, I’m going to share my technique with those of you looking for a way to entice your children to love beans.

The method is simple and it has one step:

You know which song I mean, right? The song about beans’ musical properties? Teach it to them. With gusto! And inform them that the song is correct then sit back and watch them eat. Be sure to remind them of the rules about where and when beans can be, um, played or suffer the consequences. I do believe you’ll find this to be a very effective way to encourage bean consumption whether or not you have five sons. We parents have to stick together. Go, Team Big People, right?

Have you ever done something you swore you’d never do to get your kids to try something? 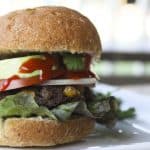 Gorgeous deep brown and crunchy on the outside, tender and bursting with taste, studded with corn, topped with avocados, tomatoes, lettuce onion and hot sauce, and served on soft buns, these meat-free Taco Black Bean Burgers pleased even the most entrenched picky eater in my house.
Author Rebecca Lindamood