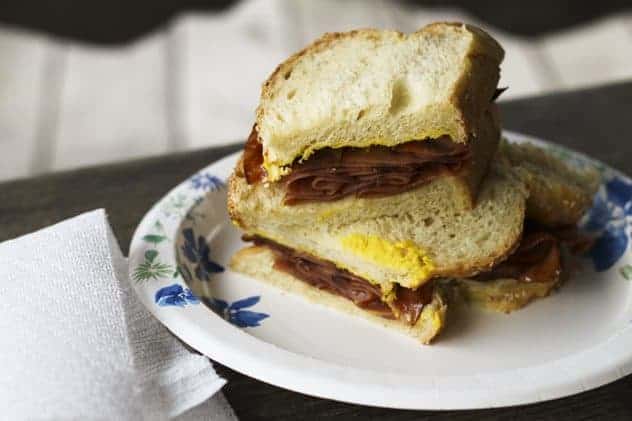 There are some things you just have to do when presented with the opportunity:

Say what? No, really!

If you dangle a piece of plain old bologna in front of me, it’s likely to activate my gag reflexes. Let’s be honest, it’s not the most appetizing looking stuff, is it? But if you fry it in a pan, pop it on some white bread and slather on yellow mustard? Well, you’ve found one of my guilty pleasures: The Fried Bologna Sandwich.

When you fry a slice of bologna, it changes the texture from wet and mooshy to crisp and chewy. There’s nothing fancy, elevated or chic about this sandwich. It is simply comforting and delicious. While these sandwiches show up on many Midwestern and Appalachian diner menus (and I have called both regions home), I grew up eating these at my own dining room table as a treat.

Above all else, enjoy it. Is it indulgent? You betcha. It’s calculated to make you smile. What do you say? You want a sandwich?

Rate Recipe Rebecca Lindamood
Prep Time 2 mins
Cook Time 5 mins
Prevent your screen from going dark
Print Recipe Pin Recipe
There is nothing fancy about this simple, hearty comfort food other than its near magical ability to put a smile on the face of anyone who eats it.