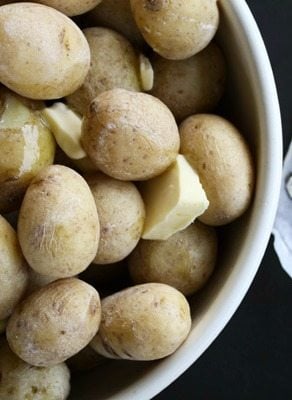 Today, I am a mind reader.

I am going to predict the reaction of all readers outside the Western New York region (or those who have never lived or visited here.) “Wow. Boiled potatoes with butter. Big deal.”

I must tell you gently that you’re wrong. Wrongity wrong wrong WRONG wrong.

These are no mere boiled potatoes. These are salt potatoes.

Look closely at the photo. Do you see that white dusty appearance to the potatoes?

That is a super fine coating of salt left from boiling in heavily salted water, draining and air drying. Are you ready for another telepathic demonstration?

Many of you are now saying, “Oookay. Boiled potatoes in salty water. Whoopee.” Have a little faith, folks!

I only share my favorite recipes with you. This is definitely one of them. 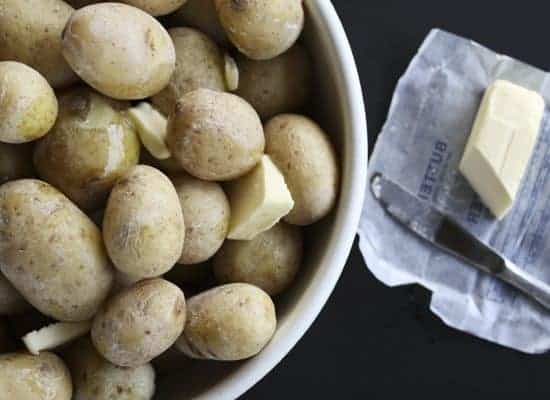 Salt potatoes are a fixture on the Upstate New York and Western New York summer barbecue/picnic/county fair/carnival circuit. Where there is a grill fired up, there is likely to be a pot of water on the boil for a big bowl of buttered salt potatoes.

Around these parts, salt potatoes represent summer as much or more than potato salad. They ARE summer.

They are so popular, that they’re sold as “kits” (the kits are nothing more than perfect sized potatoes and a packet of salt) in even the smallest grocery stores. It was one the first things my husband requested for his Father’s Day cookout and I guarantee you these will be on the Fourth of July menu for three-quarters of the households in our region.

So, what’s the difference between a mere boiled potato and a salt potato? A boiled potato is dropped into plain or lightly salted water, boiled until tender and served, usually, with butter and chopped herbs.

Salt potatoes, on the other hand, use a formula to determine how salty the water should be. Generally speaking, bring to a boil three quarts of water, stir in three-quarters of a pound of good old-fashioned table salt, then carefully lower in four and a quarter pounds of Size B new white boiling potatoes.

When they’re tender, drain in a colander and let air dry a bit to form that signature white dusting of salt. Top with butter and serve hot, warm, cold or anywhere in between. Then die of happiness when you take your first bite.

It is this method and formula that transforms a plain old boiled potato. Because of the quantity of salt in the water, it boils at a higher temperature, better cooking and developing the starches the potato contains.

When this happens, you have a creamier potato. And whoah is it creamy.

Tender, but not waterlogged; salty but not Dead-sea salty; salt potatoes are a revelation.

I have a third and final example of my powers of thought transference. Some are now asking what they would possibly do with four and a quarter pounds of cooked potatoes.

Well, my first answer is “eat them!”, but I understand that not everyone is feeding a regiment with each meal like I am. There are some mind-bendingly delicious applications for leftover salt potatoes.

There is one last item to cover in this salt potato discussion; that is the question of whether to toss with butter or let the butter melt and run down over the hot salt potatoes. I’m in the latter camp, because I like the slight salt crust to be accented by rivulets of melted butter.

I love dunking my salt potatoes in the butter that pools at the bottom of the bowl. In my opinion, tossing the hot potatoes with butter to cover them completely takes away a bit from the charm of salt potatoes. The melted butter obscures the salty outer dusting.

However -and I speak the gospel truth here- they’re still delicious that way. They’re still distinctively not your average boiled potato.

This recipe is a perfect illustration of how simplicity so often delivers the most refined, intense flavours. Eating salt potatoes -whether taking a bite from the end of the little gem and dragging it through the melted butter on the plate before biting again or licking the melted butter dripping down your fork and the side of your hand- is one summer’s purest joys. 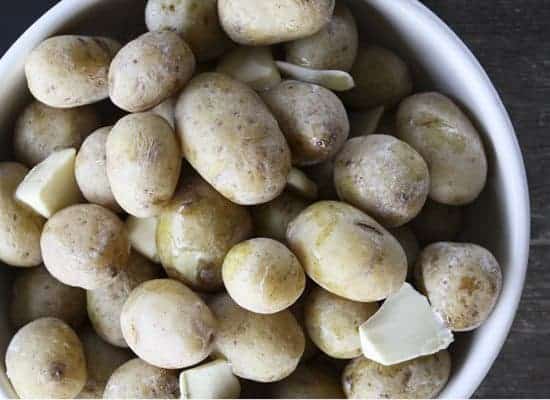 *Salt potato kits, sold all over Upstate New York, use a very specific size of potatoes; Size B, Grade US no. 2. While most grocery stores don't define their potatoes using this method, you can't go wrong buying small creamer potatoes that are one-or-two-biters. The shape of the potato doesn't matter at all. **To test your potatoes, use tongs to lift a large potato from the boiling water. A skewer plunged into the potato should pass through the potato completely if it is done.