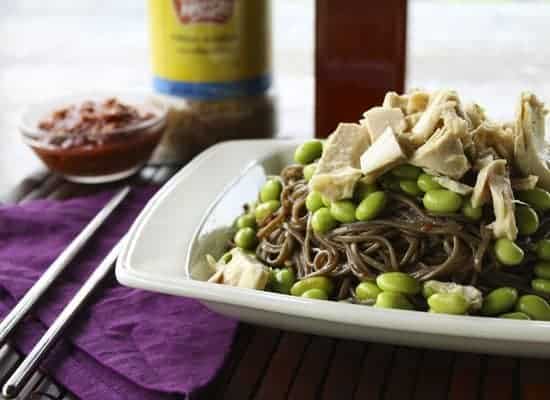 It’s been a long time since I’ve been grocery shopping. What with one thing and another, it’s been close to a month and a half since my last real shopping trip.* There have been quite a few creative food combinations happening and some of those creative combinations have been really happy accidents. For instance? This.

*What can I say? I’ve been busy. Thank heavens for a well-stocked pantry and freezer.

I grabbed a bag of what I thought were peas from the freezer and popped them into the refrigerator to thaw. The idea was to make an über-classy tuna casserole. When I opened the bag the next day, I stared blanky wondering who had swapped my peas for edamame. Derp.

When I realized what happened, I really didn’t want to put edamame anywhere near my tuna casserole. I am, as you might say, a tuna noodle casserole purist.*And so? We moved on to Plan B. Except that I didn’t really have a Plan B in place yet. So, really, we moved onto Plan Nebulous.

*It is written, in the book of me, that tuna noodle casserole should be a good white sauce, onions, tuna, peas, egg noodles and a crispy buttery crumb coating. No more. No less.

Plan Nebulous is a fun way to make a meal… Here’s how it works. Start with a loose category of the flavours you want: in this case, Asian inspired. Gather up any ingredients you have that might fit that category; I grabbed soba, chile garlic sauce, fish sauce, soy sauce, toasted sesame oil, pickled ginger, fried garlic bits, and some nice albacore tuna. That covers the basics of a main dish: Starch, vegetable, protein, and goodies. No need to complicate it… That’s all that’s necessary for a great dinner.

Next, contemplate the ingredients. What’s the best way to cook and combine them? Here, the edamame were already thawed and just needed a quick cook: one that could be accomplished by cooking it along with the noodles in the pot of boiling water. Whomp! Two birds with one stone. The sauce ingredients were all whisked together, tossed with the drained and rinsed noodles, piled on a plate, topped with the rest of the ingredients and -quicker than you can dial for take out- dinner was served.

Lovely cold soba tossed lightly with a gently spicy sesame sauce, topped with edamame and flaked albacore tuna, and garnished with fried garlic; When served with additional chile garlic sauce, sesame oil, fried garlic and a bowl of pickled ginger we are talking about a serious treat. 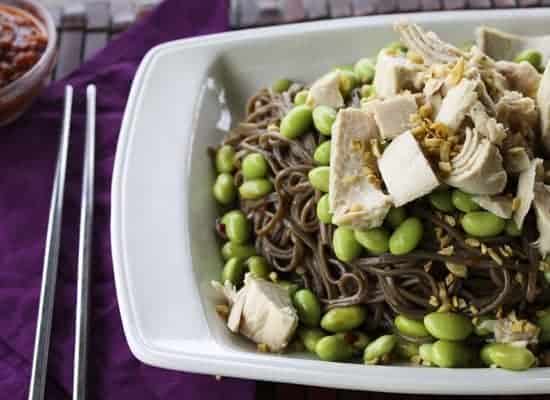 I want to let you in on a little secret. I know soba can be a little tricky. 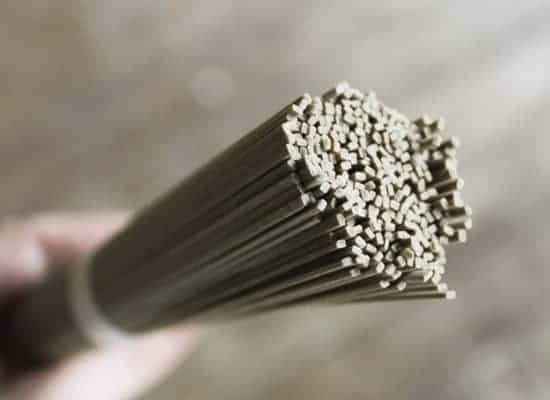 So often, they’re mushy, clumpy and gummy. This is because the package is lying to us. Lying like a dog. In fact, it sits on a throne of lies. 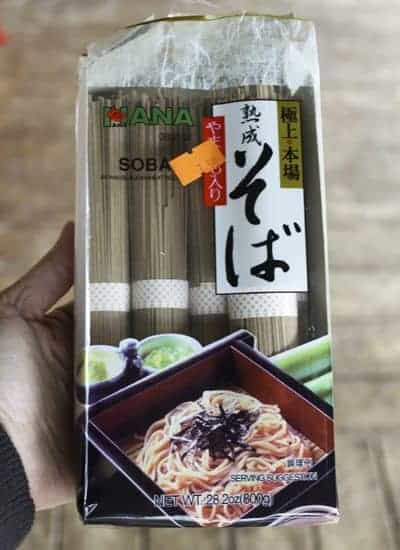 The back of my pack of noodles says, “Boil 6 minutes, stirring occasionally.” If I did that, I’d be left with a giant wad of glue noodles. That is not a good thing. Let me tell you how you really want to do this. Whether you’re serving them hot or cold, try this next time: 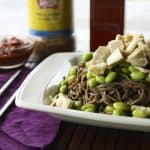 Lovely cold soba tossed lightly with a gently spicy sesame sauce, topped with edamame and flaked albacore tuna, and garnished with fried garlic; When served with additional chile garlic sauce, sesame oil, fried garlic and a bowl of pickled ginger we are talking about a serious treat. This takes under 10 minutes, making it a perfect heat-beating main dish!
Servings 2 -4
Author Rebecca Lindamood

To Cook the Noodles and Edamame:

To Make the Sauce and Dress the Noodles:

*Fried Garlic is available at some grocery stores, most Asian food markets and via mail order. If you can't find it, you can simply fry minced garlic in a little neutral oil, such as canola or peanut oil until golden brown and drain on paper towels before serving. This recipe scales up and down easily depending on how many you wish to serve. Just count on cooking one "bunch" of noodles (soba is usually sold with individual portions wrapped inside the main package) per adult or half a "bunch" per child. Likewise, count on using half of- or an entire five-ounce can of albacore tuna, drained, per adult and half a can per child, depending on appetite. Adjust the quantity of sauce accordingly.