Cherry season is cruelly short, but we can preserve some of their sweet, juicy goodness for the winter months in jams, jellies, juices, pie fillings, and pickles. Pickles?

Yes! Russian Pickled Cherries are a fabulous food preservation project for those who are intimidated by the canning process and veteran canners alike.

There’s no boiling water bath or pressure canner involved, rather this is an old-fashioned method of putting up cherries in a vinegar based liquid. The result is a tart, sweet pickled cherry that is divine with venison and pork roasts or a roast turkey.

A grand bonus from this project is amazing, vibrant red, cherry infused vinegar that is wonderful in vinaigrettes, other salad dressings, and drizzled on roasted vegetables. Think 4th of July, Labor Day, Thanksgiving, and Christmas!

Why would you pickle cherries?

You don’t have to tell me that when you think “pickles” the first thing that pops into your mind is quite probably NOT cherries. I get it.

Let me tell you something, though… These classic Russian Pickled Cherries are going to make you a believer.

Bursting with sweet cherry flavour that gets a boost in the tart department from cider vinegar, these deep, dark red orbs are a wonderful accompaniment to roast pork, venison, or turkey or roasted root vegetables. The tart/sweet, light, freshness helps cut the richness of strong flavoured or fatty meats.

This is a clever strategy borrowed from the Dutch by the Russians to make some of those cheaper cuts of meat that require longer cooking and/or are very fatty taste like premium cuts.

This is a great beginning food preservation project!

This is quite possibly one of the least intimidating food preservation projects you can take on because all there really is to it is to stem and wash the cherries. The pits stay intact to help the cherries hold their shape for visual appeal later.

After stemming and washing, they’re soaked in good, raw apple cider vinegar overnight, the liquid is drained into a pan, combined with some sugar and a handful of aromatic spices, boiled, cooled, and poured back over the cherries where it all sits together, becoming lovely and delicious, for three days. At the end of those three days, the liquid is again poured off of the cherries into a saucepan, brought to a boil, and cooled.

The cherries, meanwhile, are gently added to sterile canning jars (See here for instructions on how to sterilize jars!) and then the cooled liquid is strained of its spices and poured over the cherries. Clean lids are screwed into place, and the cherries are stashed in a cool, dark place where they are good for a year!

Isn’t that a piece of cake? Or bowl of cherries? And can I point out that my arms holding a camera up and over the jars is reflected in just about every single cherry in those jars? My kids think it’s super creepy. I think I agree.

Because the cherries themselves are neither pitted, nor boiled or even heated in this process, they maintain some of the lovely texture we love so dearly in fresh cherries. The colour DOES darken in the process, but that’s just natural.

And if you have a TON of cherries to put up, you’d better do yourself a favour and make these Rum Cherries and Boozy Cherry Molasses. Boy will you be happy you did!

Because there are two main flavours in this recipe -cherries and apple cider vinegar- go ahead and do yourself the favour of using a truly excellent cider vinegar. I only use Bragg’s Raw Apple Cider Vinegar

in this recipe. (That is an Amazon affiliate link.) It truly is the best tasting apple cider vinegar I’ve ever had, and since it’s one of the defining flavours, I advise springing for the good stuff here.

Yes, this process takes 4 days, but with the exception of draining the liquid into a pan, boiling it, and cooling it twice, then shifting everything into jars, it’s all hands-off. I’m going to estimate that 98% of the time in the recipe is hands off.

You don’t NEED to store this in the refrigerator, according to The Joy of Pickling

by Linda Ziedrich (also an Amazon affiliate link!) but you certainly can if you’re nervous about leaving something out in a cool, dark place. I would just remind you that vinegar doesn’t need to be refrigerated to keep, and this pickling liquid is almost pure vinegar.

This recipe is specifically designed NOT to be canned. In other words, don’t try to can it to lengthen the shelf life, please. You will destroy the texture of the cherries and it is quite acidic enough to be safe when stored properly in a cool, dark cabinet or basement where the temperature doesn’t fluctuate much.

Hang onto that vinegar after you use the cherries! It makes INCREDIBLE salad dressings and vinaigrettes. It’s also just plain wonderful drizzled over roasted beets or carrots! 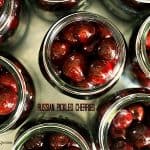