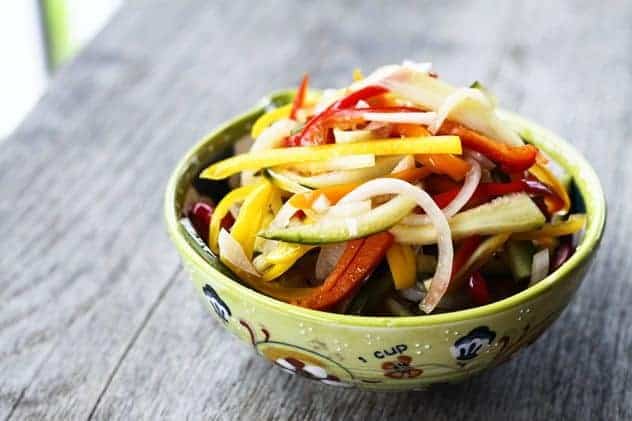 I have this friend, Meseidy, who has a fabulous blog; The Noshery. Meseidy can do it all. She is a chef, a decorator, a great conversationalist and an extremely talented folder of sheets.

I am not kidding you when I tell you that I never successfully folded a fitted sheet before Meseidy taught me to do it. It’s not my mom’s or dad’s fault… They can fold like a pro. I seem to have some double recessive incompetent-at-housekeeping-tasks gene. Ah well, better late than never, eh?

I did mention she’s a chef, right? She’s not just a chef. Girl can COOK, people. I’ve had the privilege of having her cook for me a few times and every single time I’m wowed by the food. She made these almond crisps with boozy cherries and vanilla ice cream when we were all out at The Pioneer Woman’s. Oh heavens, I could eat my weight in that.

But that is NOT what I’m talking about today. I may be dreaming about it, but I’m not talking about it. Today, I want to tell you about her Refrigerated Pickled Salad. The second she posted it, I knew it would be made. And soon.

It is best described as a bread and butter pickle salad. Crazy sounding? Maybe, but think about it. You have oodles of thinly sliced cucumbers, multi-coloured bell peppers, red onion, and garlic marinating in a sweet and sour brine of vinegar, sugar, water, and -in my case- crushed red pepper flakes. How inviting does this look? 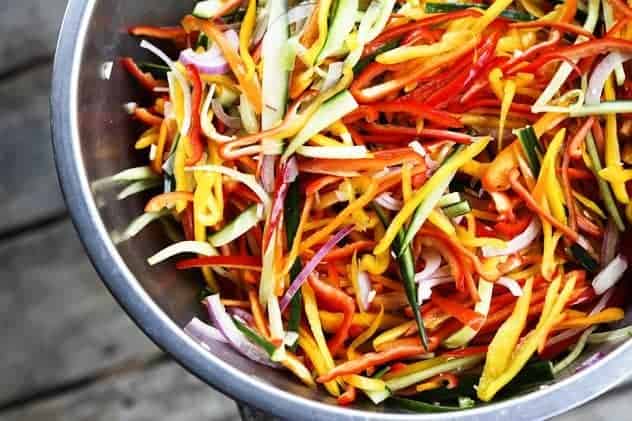 Let me tell you, this is not to be missed.

I messed with the recipe just a wee bit (on accident, but more on that in a moment and liked the results so much that I did it again. On purpose. The first time I prepared the pickles, I doubled it. What can I say, I was confident that she wouldn’t steer me wrong. When I doubled the recipe, I doubled everything BUT the ice. Whoopsie. I stuck my finger in the brine to see if it was too punchy with the extra vinegar and loved it so much, I left it that way.

Per instructions, we let the pickles happily soak in that delicious brine for THREE. WHOLE. DAYS. When I say we, I mean my sister, her husband, my dad and stepmom, my uncle and aunt, The Evil Genius, the kids and me. After three days, all bets were off. We had the pickles on carnitas tacos, grilled white hots, cottage cheese, and with cream cheese in tortilla wraps. We stuck our fingers in the jars and snacked on them all by themselves. This was the jar when we started. 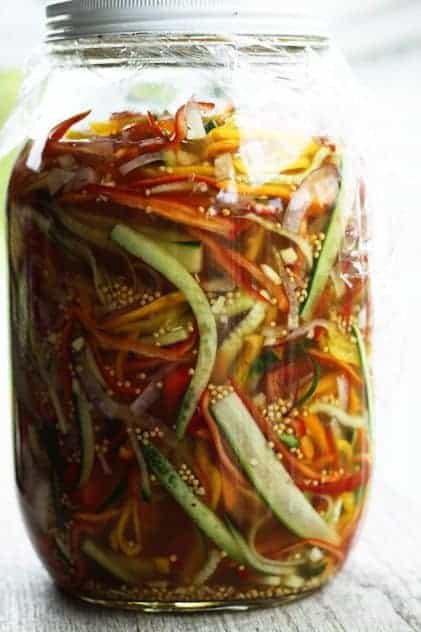 Within five days, that gallon jar was empty. Oy. We are clearly a pickle dependent family. They were so good, though! Sweet and sour like a classic bread and butter pickle, but with lovely thin strips of pickled vegetables and a little kick of spice, they were simply wonderful. Being the waste-not-want-not sort of gal that I am, I re-used the flavourful brine from the first batch for my second batch. I sliced my veggies and tossed them in the mixing bowl like before, but then poured the leftover brine in and stirred to distribute the mustard seeds. I then used tongs to transfer the veggies to the jar and poured the brine back in over everything. Hubba hubba.

Batch two is well on its way to disappearing as quickly as the first did. Thank you mille fois, Meseidy… or should I say gracias?

Rate Recipe Rebecca Lindamood
Prevent your screen from going dark
Print Recipe Pin Recipe
Sweet and sour like a classic bread and butter pickle, but with lovely thin strips of pickled vegetables and a little kick of spice, these are simply wonderful. Bonus: no canning required and they're ready to eat in 3 days! Serve this simple pickled salad with grilled meats, on sandwiches, on tacos, with cream cheese in tortilla wraps, over cottage cheese for an afternoon pick-me-up, or just on their own. Recipe very gently adapted from and used with the permission of the wonderful Meseidy of The Noshery.

You can reuse the brine for a second batch of pickled salad by pouring the leftover brine over a freshly sliced batch of veggies in the mixing bowl, toss to distribute the mustard seeds, then use tongs to transfer the veggies to clean jars and pour the remaining brine over them. Again, refrigerate for 3 days before eating.