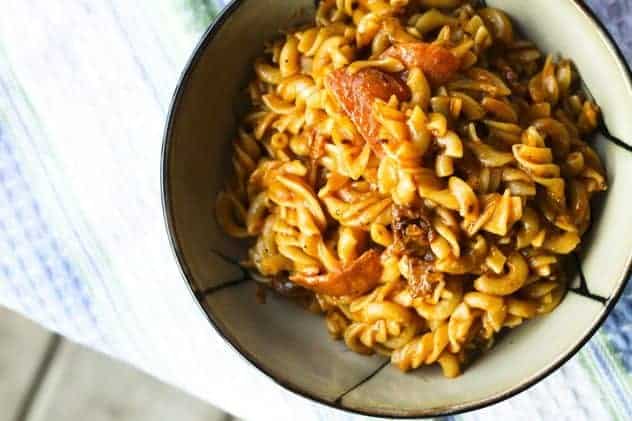 The other night, a few of my teenager’s buddies came for a Minecraft party/eating festival. What that means, for those of you who aren’t don’t have teenagers or a gamer in the house, is that there were a fistful of teenage boys with laptops at my dining room table doing something on their computers that looked a whole lot like building Lego worlds full of zombies and pigs on their laptops.

The catch is that I didn’t know whether the plans were going to work until about a half an hour before they were set to arrive: right at dinner time. If that doesn’t strike fear deep into your heart, maybe this will; it was nearly 100°F out and these teenage boys that were arriving were coming straight from fencing lessons.

Let that sink in a bit.

A handful of hungry teenage boys straight from intense physical activity at my table.

The only possible answer was pasta and lots of it. Quickly.

*Can we just talk about this for a minute? First of all, I don’t even feel like an adult yet, let alone one with a teenager and CERTAINLY NOT one whose teenager and all of his friends are taller than her. I might need someone to hold my hand for a minute.

The pasta was as big a hit as I hoped it would be. The boys ate a lot. There were happy faces. And I only had one pot to clean even after feeding eight people for dinner. I washed my one pot, the boys brought their dishes for the dishwasher and I got to put my feet up. I’d call that an all around win, wouldn’t you?

The recipe as printed below yields a large pot of pasta. Not large enough to feed the crew I fed, but large nonetheless. It scales up beautifully -I made a triple batch for the wild men over here- and leftovers, should you have them, store and reheat nicely for up to four days. 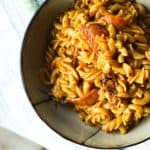