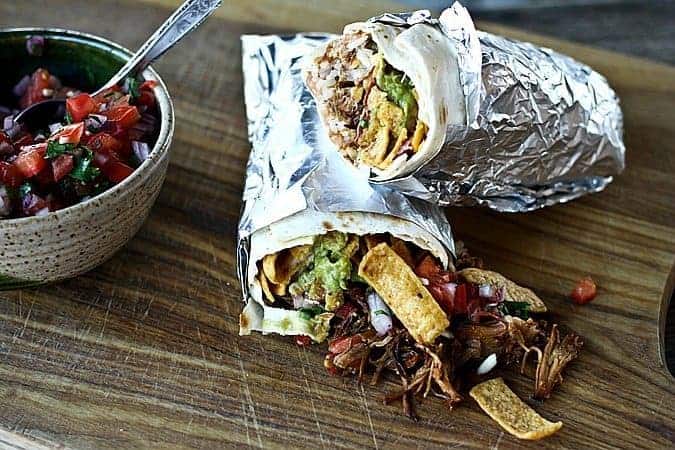 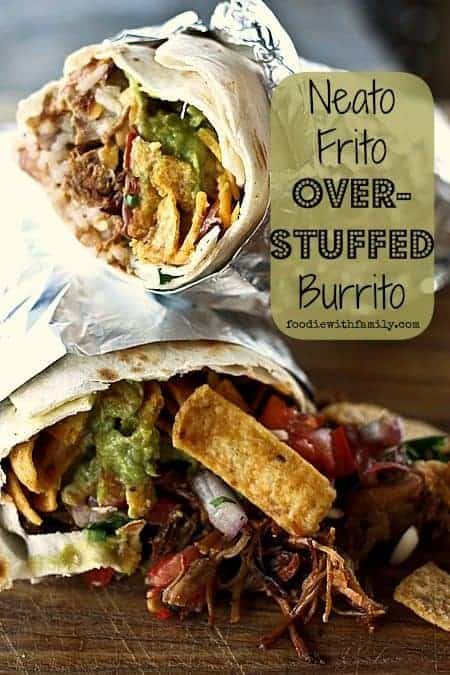 When my best friend’s mum contacted me on the sly last year to plan her surprise fortieth birthday party and said the plan was to order pizza, I offered to take care of the food. Ali has five brothers who are all well over six feet tall and have appetites to match. Ali and her husband have eight kids. I have five. Most of her brothers are married or have significant others. Her in-laws were to be attending. That was a lot of people to feed on pizza.

I knew I could provide vastly more food for the money. More bang for the birthday buck, so to speak. Her mum, not for the first time, trusted one of my wacky ideas and I began planning. When I’m feeding a crowd, I almost always fall back on starting with pulled pork. Pulled pork sandwiches would’ve been fine, but this wasn’t just any old birthday party, this was my BEST FRIEND, people. I knew she liked any and all Mexican foods, so opted for a build-your-own-burrito-bar approach. I figured that way we could actually please everyone in one fell swoop.

I transformed two giant pork shoulders into two large, heaping pans of pulled pork. I made garlicky refried beans, guacamole, pico de gallo, and rice. I shredded mounds upon mounds of Cheddar and pepper jack cheeses. I was PREPARED!

It was as popular a meal as I’d hoped. Everyone loved it! And as I basked in the glow of feeding an appreciative crowd, Ali’s ‘little’ brother Ian towered over me and asked, “Have you eaten yet, Beccy?” I said that I hadn’t because I wanted to make sure everyone else was taken care of first. He pulled me over to the buffet and watched me assemble my own burrito. On went the refried beans, followed by rice, pork, cheese, pico de gallo, and guacamole. I reached down to start rolling it and he stopped my hand, “No! You need to do this Neato Burrito* style!”

He deftly applied a line of Ranch dressing, another of barbecue sauce, then crushed a handful of Fritos over the top and said, “THERE! Now THAT’S a BURRITO!” I wouldn’t have put that on my burrito, but I surely wasn’t going to argue with a six-foot-four-inch, Scotsman. Would you?

*My sister, who used to eat at Neato Burrito with Ian, explains that it is a chain of design-your-own-burrito restaurants in the capitol region of Pennsylvania. The version Ian shared with me was his preferred order at the restaurant.

Much to my surprise, it was perfect. The crunchy chips, creamy Ranch, and tangy barbecue sauce matched the spicy pork, guacamole, pico de gallo, cheese, rice, and beans better than I ever could’ve imagined. Since that day, the only burritos my kids ask for over and over is Ian’s Neato Frito Over-stuffed Burrito. 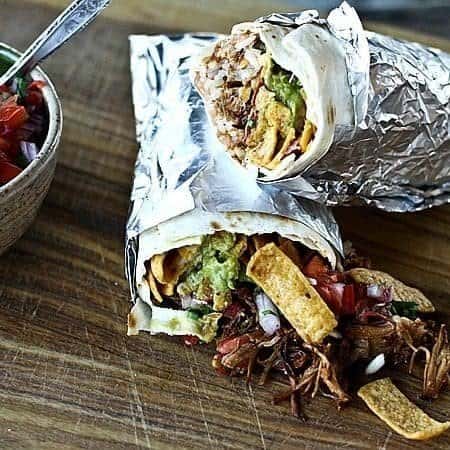 Need a great resource for the pulled pork, guacamole, and pico de gallo called for in the recipe? How about homemade Ranch dressing? I have you covered.