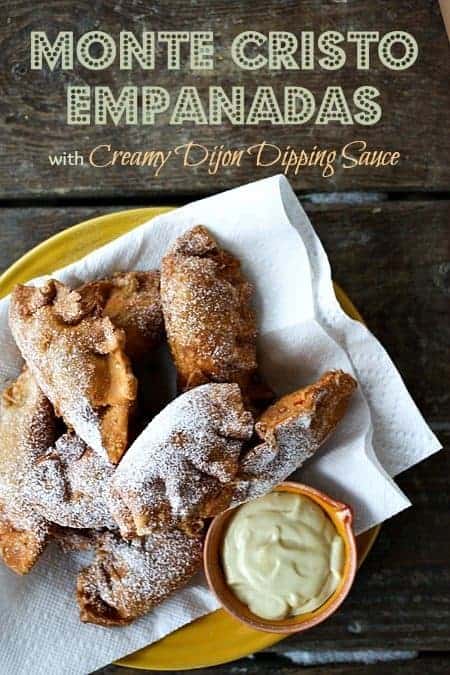 Welcome to the week leading up to the Super Bowl. I’m not going to say that I couldn’t possibly care less about football because it is possible for me to care less. How? If the food angle of the Super Bowl disappeared into the ether one day, it is likely that I’d rather have a root canal or major surgery rather than watch the biggest football game of the year. As it is, I’m pretty excited to have a chance to flex my snack food muscles on the biggest Dude Food event of the year. I’m going to hit you with not one, not two, not three, but FOUR massively snackable dishes on Monday, Tuesday, Wednesday, Thursday, and Saturday and one big old Super Bowl round-up on Friday.

Let’s kick off Dude Food Week with a doozy, shall we? Monte Cristo Empanadas with a Creamy Dijon Dipping Sauce. Hoooooooyeah. Wait. What? You don’t know what a Monte Cristo is? (There were quite a few “huh?” answers when I polled the Foodie with Family facebook community, so maybe I’d better explain. A Monte Cristo is, in short, a cross between French toast and a toasted ham-and-cheese sandwich. It’s a variation on the French Croque-Monsieur sandwich. Where the Croque-Monsieur is generally a pan-fried ham-and-Gruyere sandwich served with a fried egg on top, a Monte Cristo is a ham-and-Swiss-and-sometimes-turkey sandwich dipped in beaten egg (like French toast) then fried on a well-greased pan or griddle. Most often, the sandwiches are dusted with just wee bit of confectioner’s sugar to mimic the French toast effect and magnify the salty ham. In short, they’re the stuff on which dreams are made.

What about these Monte Cristo empanadas? They’re chopped baked ham and roast turkey, grated Swiss, and a little bit of Dijon and mayonnaise to bind it all together, wrapped up in empanada wrappers, brushed with beaten egg, and deep fried OR baked. Believe it or not, even when deep-fried these are lighter than a traditional Monte Cristo! And yes, I still dust them with confectioner’s sugar. That’s optional, I guess, but I wouldn’t want a Monte Cristo without them. There’s just something about the way it makes the ham taste even hammy-er. That’s a technical cooking term. You’re welcome to borrow it in case you need to explain to someone why you’ve just dusted their Ham, Turkey, and Swiss empanadas with confectioner’s sugar. Just don’t expect them to understand until they bite into it. Then they’ll be fine. Trust me.

For the record, Mr. Evil Genius is the brains behind this idea. When I made the Ham and Swiss Empanadas last week, he said, “I’d LOVE Monte Cristo empanada.” And since I LOVE him, and he is my ultimate barometer of Dude Food’s worth, made them I did and happy we all were! 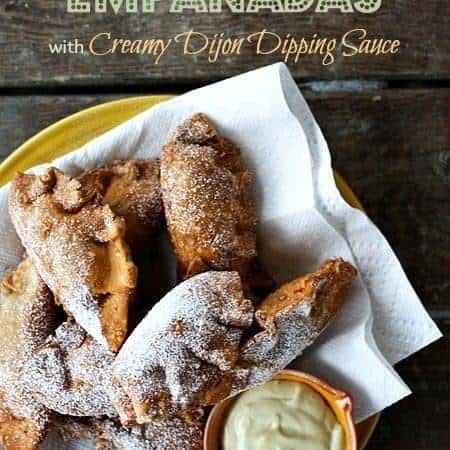 For the Monte Cristo Empanadas:

For the Creamy Dijon Dipping Sauce:

To Make the Monte Cristo Empanadas:

*You can ABSOLUTELY bake these empanadas if frying freaks you out. Simply preheat the oven to 375°F and place the empanadas that have been brushed with egg on both sides on a parchment lined baking sheet. Bake for 24-28 minutes, or until the empanadas have become puffy and golden brown. TADA! Still serve with the Creamy Dijon Dipping Sauce and a dusting of confectioner's sugar.