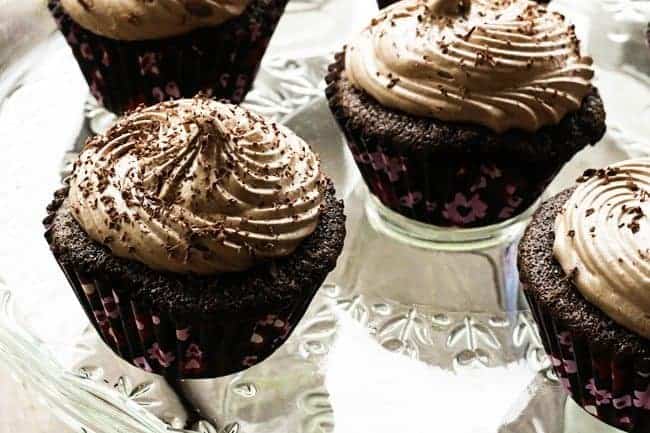 There’s nothing quite like the triple hit of chocolate these super moist cupcakes provide to get you going; deep, dark chocolate cake topped with airy, rich chocolate Italian buttercream, and grated chocolate.

Do you really need a reason for cake? Oh sure, some occasions require it (weddings, graduations, birthdays, etc…) but do we REALLY need a concrete reason to break out the cake pans and mixer and flour and butter and sugar? I say no.

Boring old Thursday becomes THE LAST DAY BEFORE THE WEEKEND STARTS! The first night of family Karate lessons becomes THE DAY WE LEARN TO KICK BUTT AS A FAMILY! Cake wields this magic. Why ask why? Grin, grab the cupcake liners, fling a little flour, and go with it.

Take these cupcakes, for example. Or rather, don’t take them because someone here might try to bite your hand off if you do. Oh shoot, there aren’t any to take anyway. We ate them all with indecent speed. Here’s my point. These cupcakes are moist, fluffy, cakey chocolate and coffee morsels of perfection. I know it sounds like I’m coming it a bit high, but really? These cakes are what cake oughta be. They don’t require any wild and crazy ingredients beyond what you’re likely to have in your pantry anyway; flour, cocoa powder, sugar, salt, baking soda, and butter.Isn’t that the very definition of making ordinary extraordinary?

The coffee flavour doesn’t come courtesy of some expensive extract, it comes from a double strength batch of coffee you can brew yourself. It’s a subtle effect in the finished cupcake, lending just a hint of something something that you can’t quite identify as coffee, much like a really good mocha. If you want to enhance that coffee effect, triple the strength of your coffee or substitute full-strength espresso in equal amounts for the strong coffee.

The cupcake part of what we’re doing to day is as simple as pie, er, cake to make. It’s not difficult by any means. I will tell you that the icing I chose to top them with is a little on the fussy side, but the end results speak for themselves. It’s not clunky, crusty, or thick like some buttercreams, but rather is rich, airy, and almost unbelievably smooth. You might find yourself wishing you’d doubled your batch! In fact, if you want to pile your cupcakes high with the Chocolate Italian Meringue Buttercream, you may just want to do that out of the gates. Believe me, though, this stuff is rich enough to stand happily in smaller amounts.

What ordinary thing will you turn into an extraordinary occasion with cake? 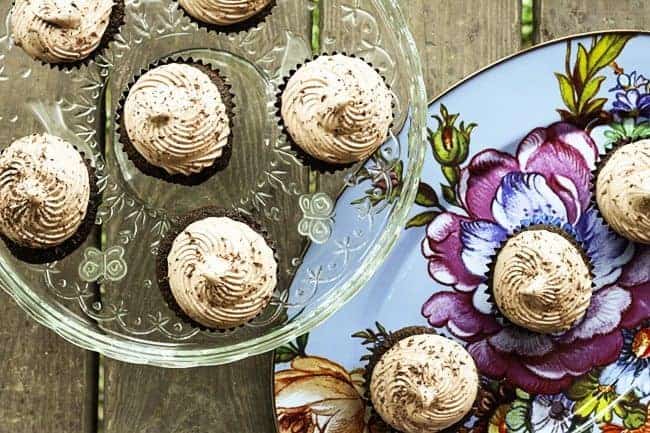 P.S. You still have time to enter to win an iPad on my not-so-ordinary extraordinary Chinese Barbecued Pork (Char Siu) post. Get on over there and enter!

For the Mocha Cupcakes:

For the Chocolate Italian Meringue Buttercream:

To Make the Mocha Cupcakes:

*Do not add the hot syrup while the mixer is running. No matter how careful you are, there's a good chance it will splash out and get you. Hot syrup on the skin burns badly, so please err on the side of caution!