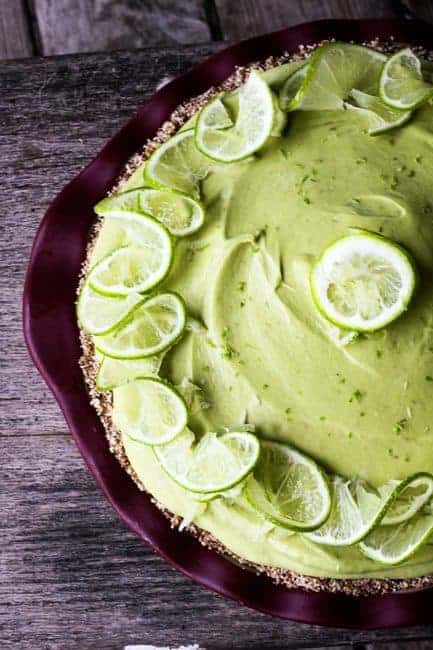 If you’ve been visiting Foodie with Family for any amount of time, you know by now that I won’t give you a recipe JUST because it’s healthy, right? You know that I take a serious stand on the fact that food must -above all else- taste great. Have I steered you wrong yet?

So when I tell you I have a creamy, lemon-lime, sweet, luscious, icebox pie with a lovely crumb crust that is *GASP* actually good for you and has ZERO sugar, dairy, gluten, or grains in it, will you believe me? Oh you’d better believe me. What’s the secret? Let me tell you a story…

I have a friend on a very restrictive diet. She’s become something of a wizard at making delectables that fit all of the rules that limit what she can and cannot eat. A few weeks ago, a highly-regarded local restaurant held a pie contest.

Contestants were asked to bring the pies along with a copy of their recipe. The recipe was to remain sealed and unexamined until the blind taste test was done.

The winner would receive a meal at the restaurant, a generous cash prize (or gift card for the equivalent), and have their pie featured on the restaurant’s menu for the summer. There were categories for fruit pies, custard pies, and savoury pies. My friend entered her grain-free, gluten-free, dairy-free, sugar-free pie in the contest with few hopes that it would get any attention.

When she came back later to collect her pie plate, she couldn’t find it anywhere. She found one of the contest organizers to ask where it was and was flabbergasted to learn that she had not just won her category, she had won the overall grand prize.

Now, let me tell you a little something about where we live. It’s full of hard-working, salt-of-the-earth people who aren’t always known for adventurous or mega health-conscious eating.

…And my friend won the contest with a pie that was arguably health food. If that and the fact that I don’t do-health-food-for-the-sake-of-health-food doesn’t convince you this is worth a try, maybe this picture will. 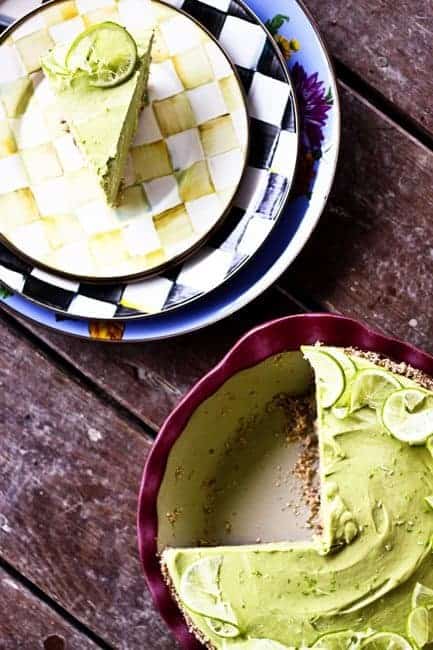 How to make a delicious grain-free, gluten-free, sugar-free, raw pie. No joke!

Icebox pies are some of my all-time favourites, and this one is the current top of the heap. It’s like a pie plate full of the creamiest lemon lime ice cream of all time.

Somehow it manages to be rich and indulgent but not weigh you down after you eat it. Are you ready to find out what’s in it? Maybe you’ve already figured out some of it!

The crust is finely chopped almonds or pecans, unsweetened flaked coconut, and pitted dates whizzed together in the food processor until it forms a clumpy, crumbly mess. This is pressed into the pie plate and refrigerated while the filling is prepared.

The filling? Are you holding onto your hat? Avocados, honey, lemon and lime juice and zest, extra virgin coconut oil, and just a kiss of vanilla extract are blitzed together in the food processor to form a smooth custard then poured into the crumb crust and frozen. Don’t even look at me like that. This isn’t just good. It’s GREAT! 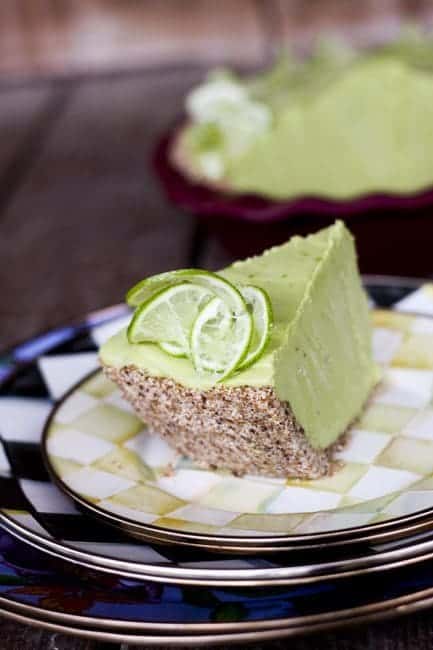 Look at that crust! I liked this crust so much that I think this might be my new go-to crumb crust for all pies that require them. In fact, I might even start using this instead of my graham cracker crust on my cheesecakes. The texture is the perfect combination of crumbly and coherent. It’s sweet and nutty. Gosh, folks… it’s just so good.

I am going to hop up and down on my couch until you try this. I won’t hear any excuses… even my avocado hating kids couldn’t get enough of this pie. Granted, they DID refer to it as guacamole pie, but I think it’s because they ate it, so who cares? 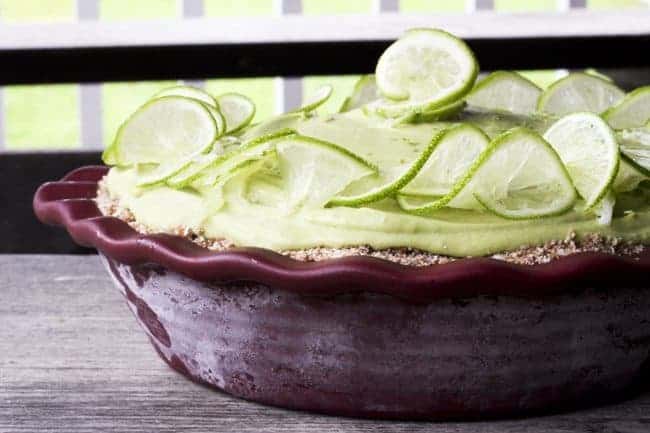 Rate Recipe Rebecca Lindamood
Prep Time 15 mins
Total Time 15 mins
Prevent your screen from going dark
Print Recipe Pin Recipe
This beautiful, creamy, indulgent, lemon-lime, mile-high, icebox pie just so happens to be good for you. How is that possible? It's also friendly for a wide-range of dietary restrictions because it is gluten-free, dairy-free, grain-free, sugar-free and raw. With one minor adjustment it is also vegan-friendly. Ever so slightly adapted recipe courtesy of my friend Joy Hinterkopf

To Make the Crust:

To Make the Filling:

To Serve the Pie: