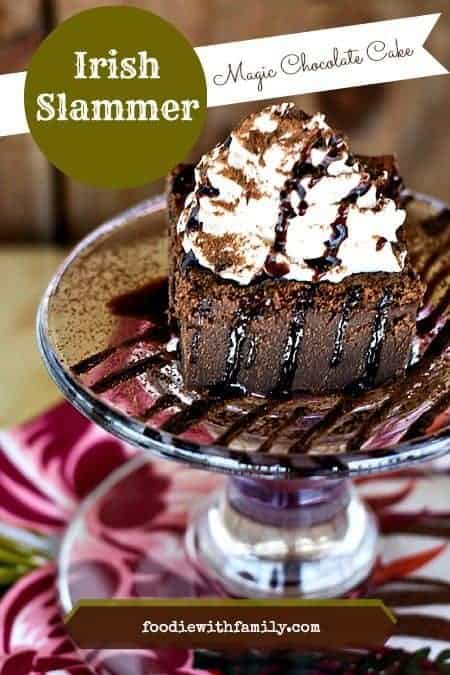 Guinness has a weird effect on people. Most folks are pretty opinionated about it. I’m firmly in the ‘love it’ camp but I know a lot of people who are -if not in the ‘hate it’ camp- decidedly lukewarm about it. Most of those in the ‘hate it’ and ‘meh’ camps, though, can at least find a modicum of love for it when it’s baked into things. How is this possible? Because Guinness equals malt and lots of it and chocolate pairs with malt like sunshine goes with lollipops.

And Guinness plus Bailey’s Irish Cream plus Jameson Whiskey? Well? That’s another combination that -while delicious- is a bit polarizing. Why? Well, it’s a drink that has kind of an awful name: The Irish Car Bomb. While working on this cake, I realized I was uncomfortable using that name, and so asked friends and family (not because they’re lushes, but because they’re knowledgeable) whether there was a widely known alternate name for the drink. One friend suggested “Irish Slammer” after some research. “BRILLIANT!” I said, “What could possibly be wrong with calling it an Irish Slammer?”

My brother chimed in with concern over the innuendo. “I don’t see any inuendo,” said I… and brushed off my little brother. So then today, while working on this post, I sent a note to my sister, the research librarian, about the cake. I said I wasn’t calling it an Irish Car Bomb because I found the name distasteful. She agreed. Then I told her I was going to use Irish Slammer but that our brother had said I might get comments on the innuendo. She said, “Really? I have no idea. Wait. I’m a librarian. I can look it up!”

Turns out our brother was right. Who knew? I mean besides him?

HOWEVER… I’m reclaiming this word to mean this particular cake. The cake that my sister suggested I title, “I’ve got booze and I’ve got chocolate. It’s cake time.” A little unwieldy, but appropriate. Probably  more appropriate than Irish Slammer, but hey. I was committed. I had my graphic on the photo already.

Other names we tried out, “Blandly Named Cake That No One Can Misconstrue”, “Inoffensive Cake”, “Offensively Divine Cake”, (or my other favourite from her) “Seemingly unassuming cake that’ll knock your socks off only in a consensual manner of course.”

… Shoot. My brain hurts. Just make the darned cake. It’s amazing. And inoffensive. Well, unless you’re morally opposed to booze in cake, then I’m just in trouble anyway. Just in time for St. Patrick’s Day: a heaping helping of my mental state.

I present to you The Cake Which Shall Not Be Named.

After all this, if you’re still with me and haven’t clicked away in a huff, you may be wondering why it’s a “magic” cake. This is because the cake batter separates into two distinct layers as it bakes. The underside is a perfectly smooth, rich malted chocolate, Irish cream, and whiskey custard reminiscent of the aforementioned drink while the top is a thin, light-as-air chocolate cake. 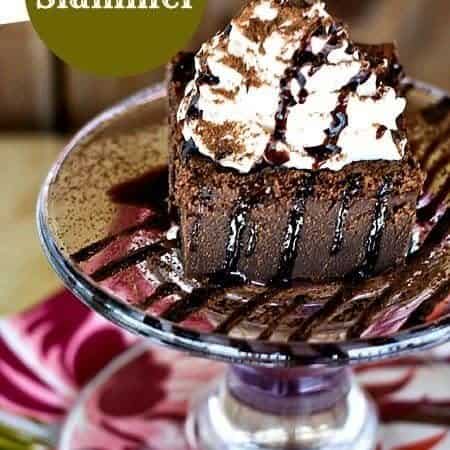 Rate Recipe Rebecca Lindamood
Prevent your screen from going dark
Print Recipe Pin Recipe
This cake inspired by and adapted from with thanks to Foodness Gracious's Chocolate Magic Cake Recipe which was inspired by the lovely Diane and equally lovely Todd of White on Rice's Magic Cake.

*If you cannot find coffee extract, you can simply substitute an equal amount of vanilla extract.