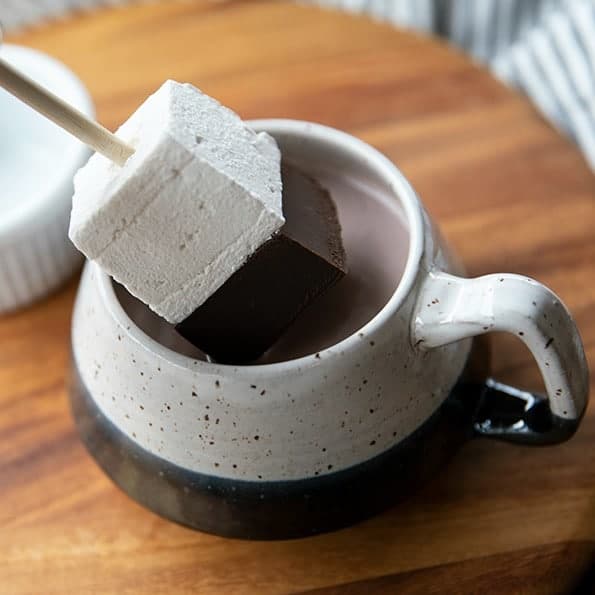 This hot chocolate on a stick recipe was originally published in November 2009 and was one of the first very popular posts here on Foodie with Family. Join the many people who have made this a part of their holiday gift giving tradition! 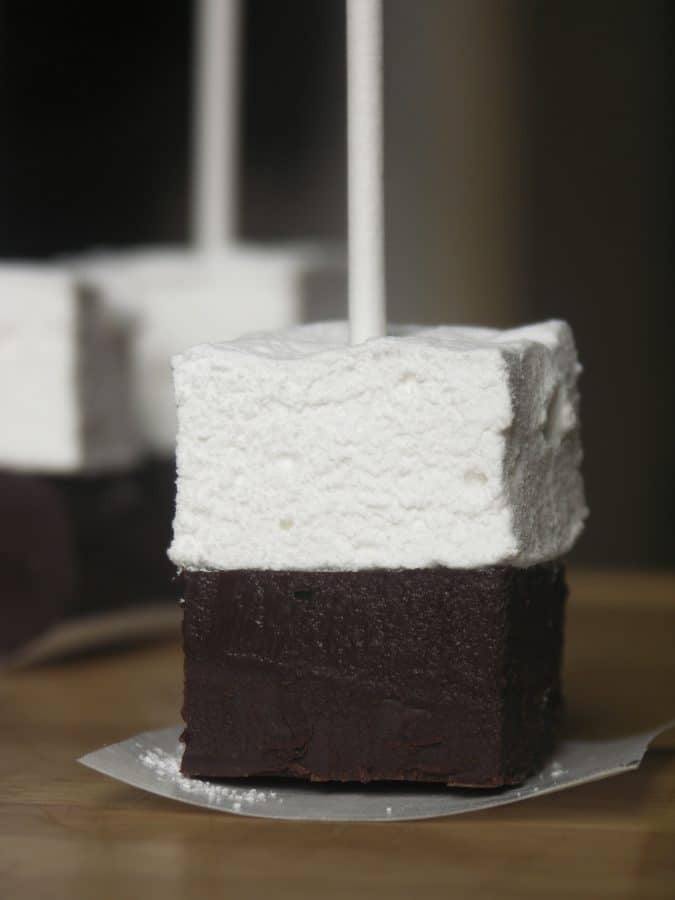 This is one of the most clever ideas I’ve seen out of the King Arthur Flour Baker’s Circle lately. (And they’re no creative slouches over at King Arthur.)  In the most recent e-newsletter* from their test kitchen they included a recipe for Cocoa Blocks.

*If you’d like to receive their free e-newsletter, you can click this link and look for the sign-up box in the lower right hand corner of the page.

Oh sweet merciful heavens. Cocoa blocks. Very utilitarian name, no? Nothing against my King Arthur folks, because I really do love them, but I think the name doesn’t do justice to these little beauties. I’ve renamed them. Henceforth, they shall be called Hot Chocolate On A Stick.

Hot Chocolate on a Stick is a creamy chocolate confection that is much like an ultra-rich fudge. You can, as the new title indicates, put these blocks of chocolatey goodness on sticks for ease in swirling it in hot milk or nibbling.

You can simply leave the squares alone and stir them into your hot drinks. Or you can go another step, as I am wont to do, and skewer a marshmallow on top of the block of chocolate. 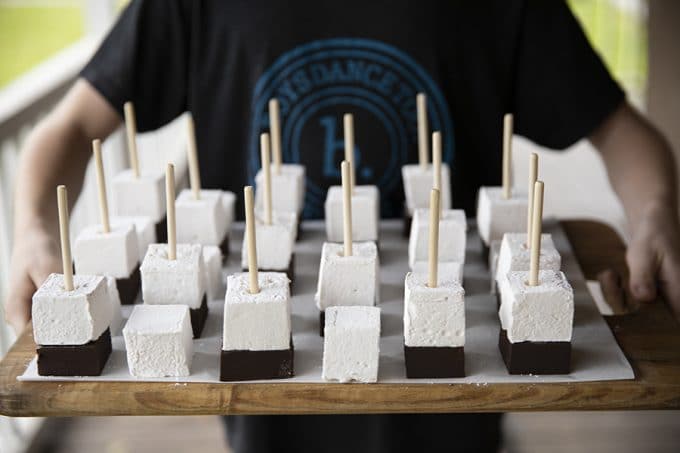 So if you combine luscious, velvety, rich fudge with light-as-air homemade marshmallows it should follow that what you’ve created is heavenly. And it is. Oh, it is!

Not to put too fine a point on it, but having these in my kitchen was the only thing standing between me and a potential sale of my children to the circus early career apprenticeship commitment for my children. I hid in the bathroom with a  ‘Hot Chocolate on a Stick’ and nibbled my irritation away.

I could’ve taken a cup of hot milk to the bathroom with me, but I was in a hurry, people. I needed the chocolate and I needed it fast. 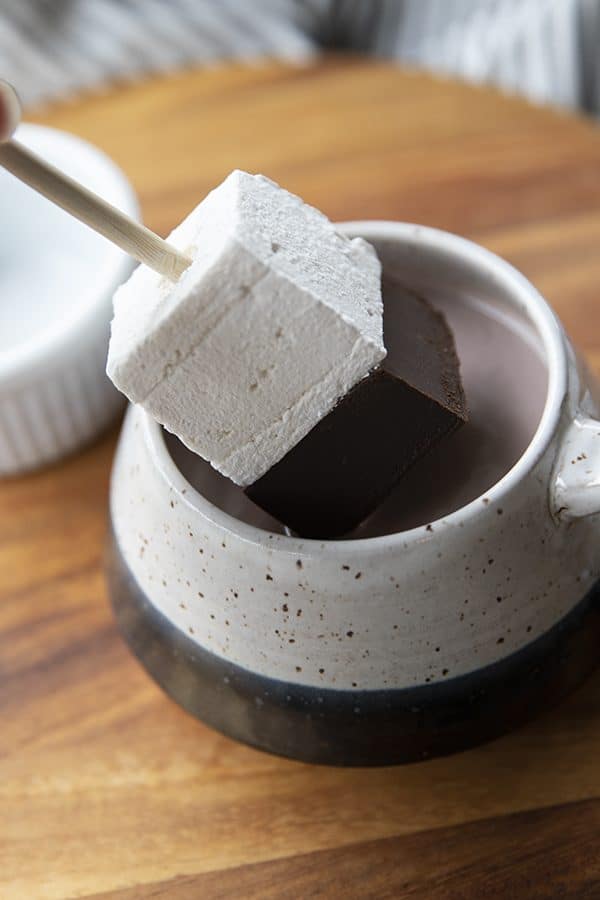 The kids, on the other hand, found the stash while I was hiding (and small price to pay for the peace it brought me) and stirred theirs into hot cups of milk. I hear tell that they enjoyed it immensely. The chocolate rings around their mouths bore out their testimony.

May I recommend that you whip up a batch or two or three of these? Keep one batch for yourself. Wrap one batch in plastic and pretty ribbons for gift-giving. And that last batch?

Well, give it away one at a time to your kids’ teachers, bus drivers, your preacher, the mail carrier, the elderly man or woman down the road who lost their spouse this year, the gal in the apartment two doors down who looks a little lonely, or anyone else who looks like they could use a good dose of seasonal cheer. 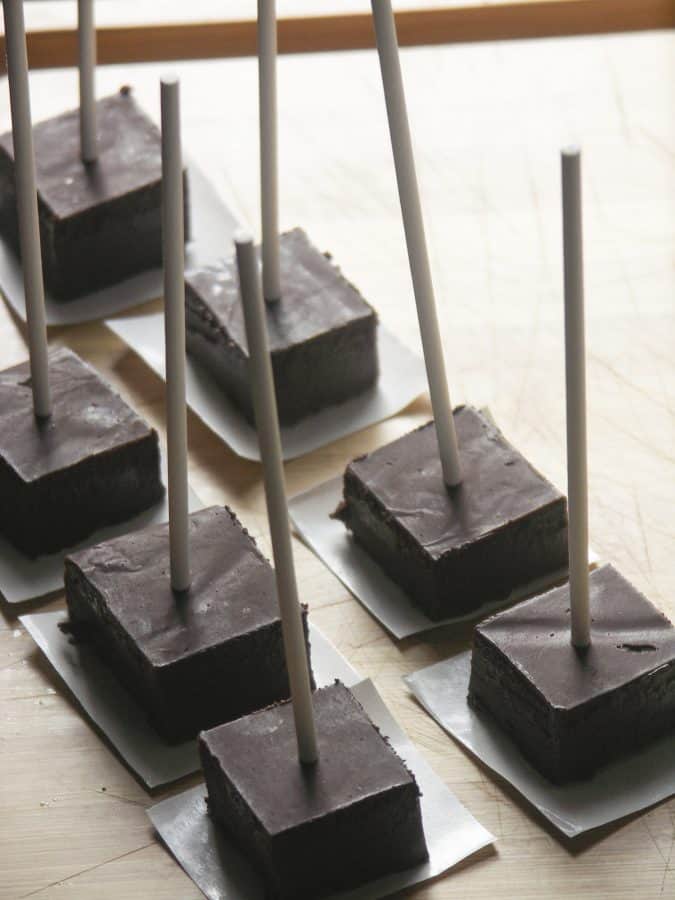 Do I need Homemade Marshmallows for Hot Chocolate on a Stick?

Make Hot Chocolate on a Stick 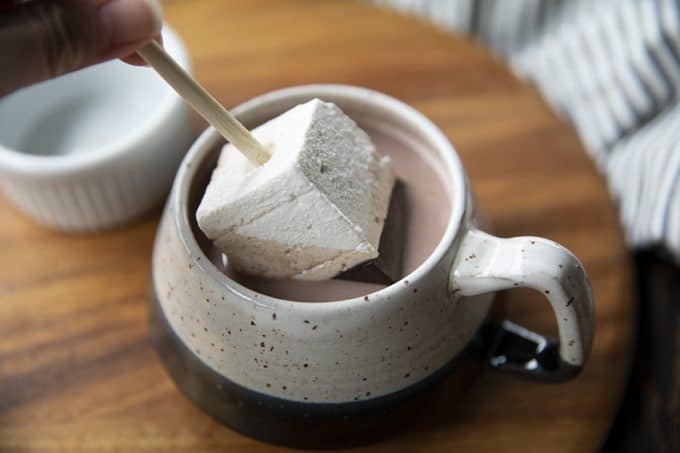 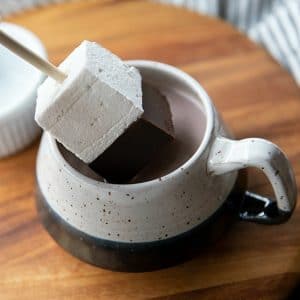 Rate Recipe Rebecca Lindamood
Prep Time 15 mins
Cook Time 15 mins
Prevent your screen from going dark
Print Recipe Pin Recipe
This creamy chocolate fudge confection can be nibbled in its pure form, skewered on a stick alone or with homemade marshmallows and simply eaten or swirled into hot milk for a hot chocolate that is second to none.

This post was originally posted in November 2009, then republished in 2011 (In Loving Memory of Evelyn “Patti” Worthington.) Updated in December 2018 with updated instructions, photos, and Cook’s Notes.