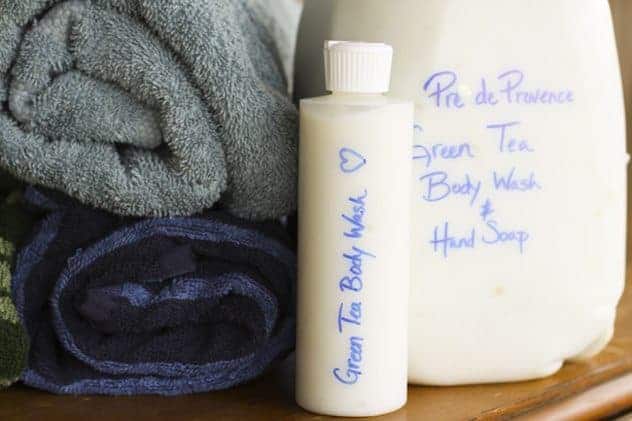 As you can imagine, a home with five sons, an evil genius handyman husband, two dogs, an elderly cat and fifteen chickens can get a little -how to say- malodorous. Don’t misunderstand, I love every one of the aforementioned scent producers, but people… it can be a little hard on the nose around here.

Par example: I sent one of my children (name redacted for the sake of their future pride. We’ll refer to him here as Stanky Hank.) to the shower. Stanky Hank was in the shower for ten minutes. He emerged soaking wet and still covered with dirt. The conversation went a little something like this:

Me: You were in there for ten minutes. Why are your hands, feet, arms, and knees still covered with dirt stains?

Stanky Hank: Oh, I was supposed to get rid of those?

If I told you this was the rule rather than the exception, would you faint? Because I’m feeling a little faint thinking about it. And before anyone offers me smelling salts, remember, I live with a bunch of walking smelling salts.*

*Free social history lesson. Do you know what smelling salts actually were? They were bottles of ammonia solids mixed with aromatic essences. In short? They smelled like cat pee mixed with perfume. Remember, they were designed to wake you up. Now I’m not accusing my kids of smelling of cat pee, I’m just saying they have the potential to wake you up. But I digress.

Foodie With Family Trivia Moment: I’m obsessed with triple-milled French castile soaps. For those not equally obsessed with soap, castile soap is made with olive oil (translation: great for your skin). And the triple-milled soaps? Lush. Lush is the best word. My obsession extends most specifically to my favourite soap brand: Pre de Provence.

These massive bars of soap are unparalleled in the world of pretty smelling things. In scents like Coconut, Rose, Linden, Sage, Mint Leaf, Honey Almond Lavender, and my favourite- Green Tea- this soap makes me want to strap a bar to my nose just to get through life a little more happily. Although, upon reflection, walking around with a bar of soap strapped to my head might provide it’s own set of challenges…

…But I’m belabouring the point. I have used these soaps for a long time. The guys, however, didn’t want to use my pretty smelling soaps because they favour body wash over bar soap. They favour liquid hand soap over soap dishes. Sigh. My adorable cretins.

I’ve already told you about my happy, happy, super cheap and mega-effective homemade laundry detergent and my allergy-sufferer friendly unbelievably easy homemade air fresheners. You know I love to make pretty smelling things. Between that and the description I just gave you about my menfolk you can imagine that when I ran into this over on Pinterest, I was ready to make it immediately. STAT. Right away. Now. Time was a-wastin’.

Thanks to a proclivity for collecting lovely smelling soaps and a stash of vegetable glycerine from my previous Grand Marnier making forays, all I needed was to boil a gallon of distilled water.*

*Since even we cannot go through a gallon of soap in a week, I opted to use the boiled distilled water to slow any potential microbial growth in the soap. Distilled water has minerals removed (I used this because our water is hard) but still needs to be brought to a boiling temperature to kill any bacteria in it. I think we can all agree that a petri dish full of soap does not sound appealing, right? “Hi. My name is Rebecca and I’m a germaphobe.” 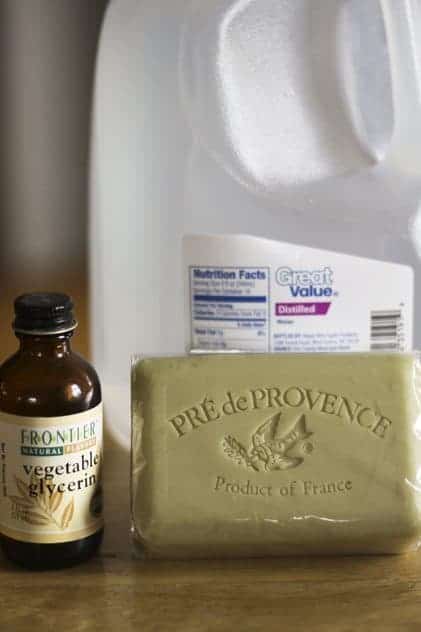 And because it is just three I have three pieces of advice about the choice of soap:

I followed instructions and let the soap set up overnight. This leads me to two very important pieces of advice.

Regarding that second piece of advice, I do not own a hand-mixer. WHAT? Yes. It’s true. I got rid of it because my husband insisted that he make mashed potatoes with them. After I made mashed potatoes with a ricer and a wooden spoon, he agreed, but I decided to remove temptation and thus avoid gluey potatoes from here on in… but again? I digress.

When I removed my now permanently scented lid from my pan, I touched the top of the soap and thought, “Well, that’s nice. I have a giant disc of soap jello.” After I jabbed at it a few times with my whisk, it started breaking down a bit. It was still a little too, er, chunky for our liking. 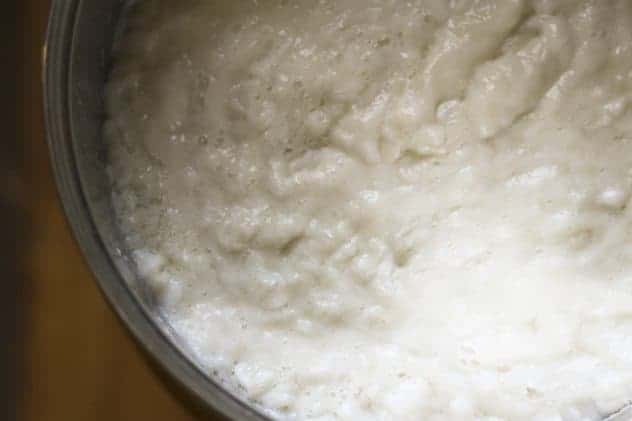 I found my egg beaters and set my very energetic six year old to mixing up the goo. 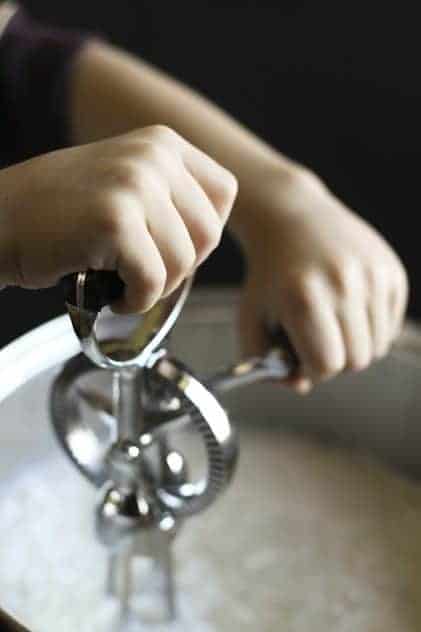 Do you have a six year old lying around? They’re dead handy. 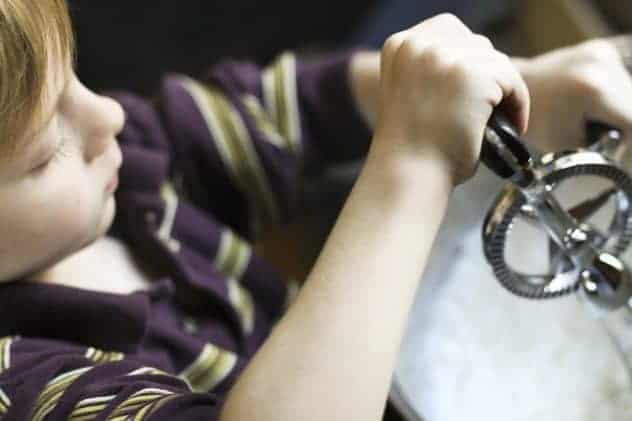 Would this be easier using a hand mixer? You betcha… but an eggbeater and a six year old is an equally effective if slightly slower solution. If it had been any thicker, I might’ve heated it back up, added a bit more water and stirred it in then let it cool again to test the viscosity before bottling. As it was, I was happy. The now lovely smelling six year old and I ladled the liquid soap (which has a bit of a stringy consistency that doesn’t effect the overall product but takes a bit of adjustment if you’re using to the usual liquid soaps) into the gallon jug that had held the distilled water and found we needed more containers. We went on to fill an empty liquid hand soap container and an empty mid-sized body wash container. The breakdown on cost is:

My guys smell good. Really, really good. As in, “DAD! Mom keeps sniffing me!” good. $8.13 for a giant jug of body wash and hand soap is reason enough to make it, but the way they smell is priceless.

And lest you worry about nostril bombing with perfume, let me reassure you. My husband, as part of his Evil Genius job qualifications, is a super sniffer. His nose is very sensitive indeed. If this was overwhelmingly perfumey you wouldn’t be able to get him near it even with a ten foot pole. Whether it’s the fact that this particular soap -Pre de Provence Green Tea- is just a straight up wonderful and mild manly scent, I can’t say. But I can promise that Mr. Twitchy Nose and the five little urchins love it. And me?

Well, I get to swoon for an entirely different reason now.

Recipe and method gently adapted from The Farmer’s Nest.

Bring the water to a boil in a large non-reactive pot (stainless steel or glass). Grate the bar of soap on a metal box grater. Add the soap shavings and vegetable glycerine to the boiling water, stirring frequently, until the soap shavings are completely dissolved into the water. Remove the pan from the heat, cover tightly, and let rest undisturbed overnight or for at least 8 hours.
After it has rested, break up with an egg beater or with a hand mixer until smooth. If it is too solid, warm over the heat again, add a little distilled water and let cool again to test the consistency. Repeat until you reach the desired viscosity for your soap.
Put a funnel into the now empty distilled water jug and ladle the soap into the jug. Ladle any extra soap into empty hand soap bottles or jars with tight fitting lids.
Use like you normally use body wash or liquid hand soap.
Store unused soap in a cool, dark place. If you’re a nervous Nelly type, you can store it in the refrigerator.