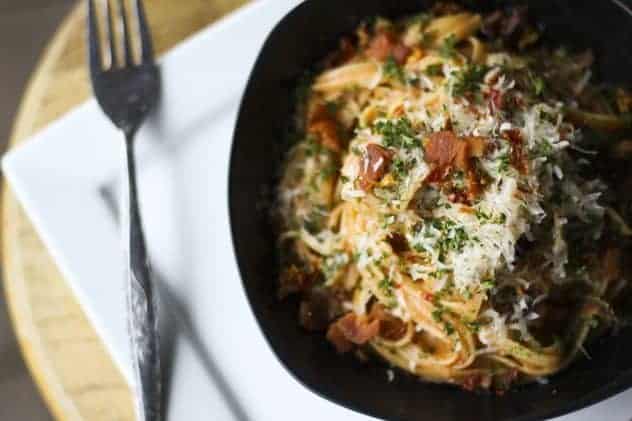 Oh, I know. Thursday is Thanksgiving, but we DO have to eat between now and then, and I’m thinking we all need something simple and satisfying that does, most emphatically, not involve turkey. Add to that the fact that it’s seriously cold (at least where I am) and we need something comforting, too. Simple, satisfying, comforting. Is that a tall order for a weeknight meal?

These are the moments where having a couple fast, inexpensive and light-on-labour meals in your repertoire makes life significantly easier. A couple weeks ago, I hosted a Pampered Chef party. It was a fun hen party, all the gals were there and there were kitchen gadgets abounding. The representative passed out a recipe for a pasta dish involving bacon, tomatoes and linguine. After preparing and enjoying their version, I streamlined it and adapted it to turn it into a bonafide one-pot dish (my favourite weeknight go-to) and liked it even better.

…And then I had an idea. The method was handy -everything cooked in one dish- and the ingredients were almost always on hand. What if I could change it up just a bit, a little substitution here and there, and make something completely new?

This is when having a great working knowledge of how tastes go together and a willingness to play with your food comes into play. When you have a base method that works great (cooking the meat, saving fat, cooking onions and garlic in it, adding broth/vegetable, dry pasta and cooking, then thickening the sauce) and know what things go well together (Italian: tomatoes, olive oil, garlic, basil, onion, hard cheese. Mexican: tomatoes, cilantro, chili peppers, melting cheese, cumin, lime. Asian: cilantro, lime, soy sauce, garlic, ginger, green onion, sesame oil.) you can start looking for similarities and experiment.

I tried it the following night swapping out bacon and adding in chorizo, out with the parsley and in with cilantro, out with the Italian style tomatoes and in with tomato puree, cumin, Mexican oregano, and a dried chili pepper, out with the Asiago and in with the Monterey Jack. Top the lot with more cilantro, candied jalapenos, sour cream and black olives and I had a Tex Mex Pasta Toss that used an identical method but created a completely different meal.

The results? As my sons say, “Happy Day!”

My kids and husband were in seventh heaven having pasta two nights in a row. Everyone loved the taste of both dishes. I loved both the fact that it only took one pan to make the whole thing and that I had a framework for a customizable meal that could be based on what ingredients I had on hand and what part of the globe I wanted to visit that particular night. 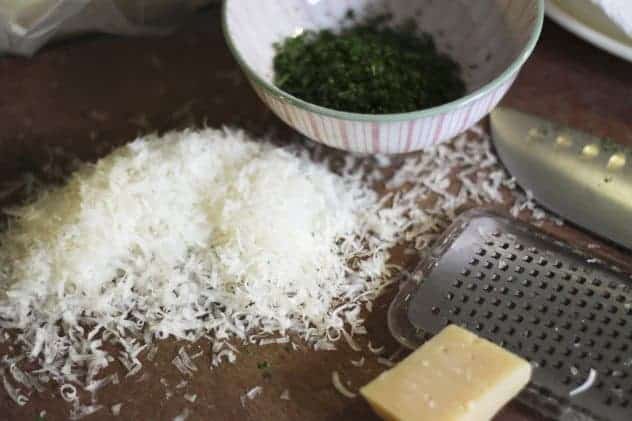 Dinner doesn’t get much faster or more satisfying than this Creamy Tomato and Bacon Linguine. Full of great Italian flavours like garlic, tomato, crushed red pepper and herbs, this is done in well under an hour and easily customized to please even your pickiest eaters. If you, like I, have kids or eaters with texture issues simply finely grate your onions and garlic on a box grater and zap your tomatoes in the blender to yield a perfectly smooth, creamy sauce.

Add a loaf of crusty bread and a salad and you have a meal that is sure to make it into your regular rotation.

… Or will the Tex Mex version be your darling?

Tune in tomorrow to find out!

Seriously friends, the goal of this post and tomorrow’s is to share the joy of playing with your food. When you have a recipe that seems no fail, it probably is! Mess around with it. Just substitute one ingredient at a time if it makes you nervous, but do try. A recipe is a guideline, not a law. Spend a little time thinking about the foods you like best and what you like best about them. Try tweaking other recipes so that they taste exactly the way you want them to taste. The kitchen is your canvas. Feed your passion! 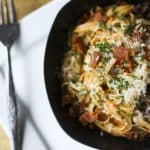