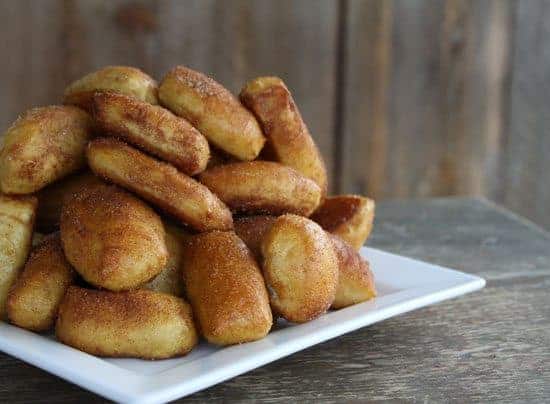 You might have noticed I have a real thing for soft pretzels. Usually, I whip up the savoury variety (here or here) but my kids are partial to the ones you see up above. Chewy little two-bite pretzels tossed with butter and cinnamon and sugar.

I know I’ve mentioned how popular other varieties of soft pretzels are around my house. But these? These are the big guns. These are the ones that make my kids gaze at me with eyes aglow.

My kids know I’m making these before I even tell them. They love them so much that my second born recognizes the smell of the dough. He comes drifting into the kitchen led by his nose much like Bugs Bunny sniffing out a world-class carrot. He assumes a dreamy expression and he breathes, “Cinnamon Sugar Soft Pretzels. Oh Mom!” The inevitable follow up is a little mini-Riverdance routine accompanied by, “When will they be done? Oh, when will they be done?” An answer and the sound of sprinting feet and a bellowed “MOM’S MAKING CINNAMON SUGAR SOFT PRETZELS!” later, all five boys come barreling through the door with expectant faces.

This snack is the way to my boys’ hearts. Take note, all ye who wish to woo them later. They are exceptionally handsome young men and the competition will be thick. You’ll want to remember this recipe.

While my kids like a long, tall glass of icy cold milk with theirs and my husband prefers a hot cuppa coffee I say the only real requirement is a big stack of napkins.

To Make the Dough by Hand:

To Make the Dough by Stand Mixer:

To Make the Dough by Bread Machine:

To Cook the Pretzels:

Serve with an ice cold cup of milk or a hot cup of tea or coffee, but don't forget the napkins!