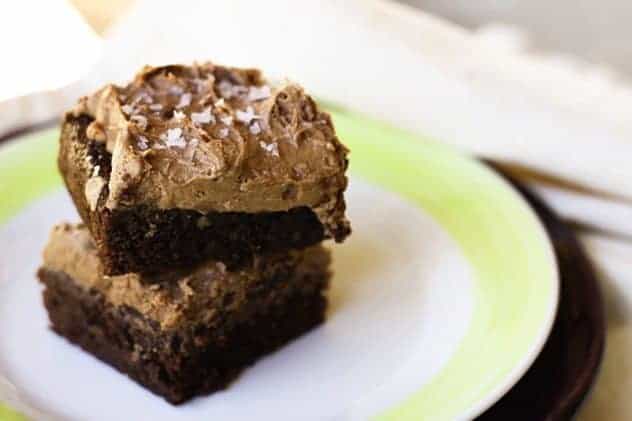 Despite the prevalence of desserts here on Foodie With Family, I don’t have much of a sweet tooth. I think that is why I’m so picky about my desserts. When I DO want a sweet, I don’t want just any sweet. I want the best.

Oh, hi. I’m high maintenance on desserts. There are certain things that are almost guaranteed to make me happy: dark chocolate, Nutella, and peanut butter or any combination thereof.

During a rare attack of my sweet tooth last week, I turned to one of the fastest ways to satisfy; I made brownies. They weren’t just any brownies, though, oh no. They were THE brownies. The fail-safe, fool-proof, can’t-mess-’em-up brownies I’ve been making for years. I’ll tell you know, they’re cakey. I kind of think of them as brownie cake rather than br-ow-nies. Brownies are, to me, just this side of fudge. And I don’t know what possessed me, but this brownie cake that I’ve made so many times and left plain? I had to go and frost it. Simply had to do it. I was compelled.

Into the stand mixer went butter, Nutella and peanut butter. Because, well, I don’t know. Because I could? Whatever the reason was, I’m awfully glad I did it because I ended up with the fluffiest, Nutella-y-est, peanut buttery-est frosting ever to get licked from the bowl. I grabbed ye olde offset spatula and put an entire batch of the frosting on the big brownie. 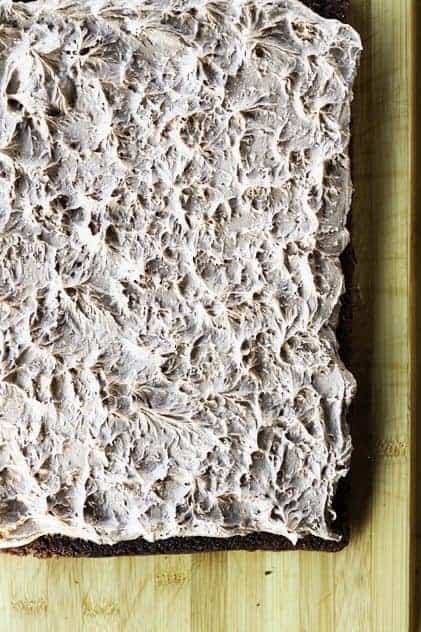 Then thought to myself, “EGADS. That is going to be sweet. SALT! I’m going to put salt on it.” A little shower of Maldon sea salt flakes later, I sat down in front of the cutting board and cut off a corner of the now frosted and salted brownie cake to take a bite.

Have you ever had salt with your chocolate? Do you know what it does to you? There is a scientific reason behind why it is do dadburned good. Salt makes your taste buds wake up and take notice of what it rides in on. When you put salt on chocolate, the chocolate tastes more chocolatey. You know that’s a good thing.

I do have one little bit of warning, though. Don’t make this when you’re going to be home alone. Just don’t. Not that I ate too much of this by myself… But hey, if you’re in the neighborhood, maybe you could roll me out to my pilates mat?

For the Brownie Cake:

For the Nutella Peanut Butter Frosting:

To Make the Brownie Cake: