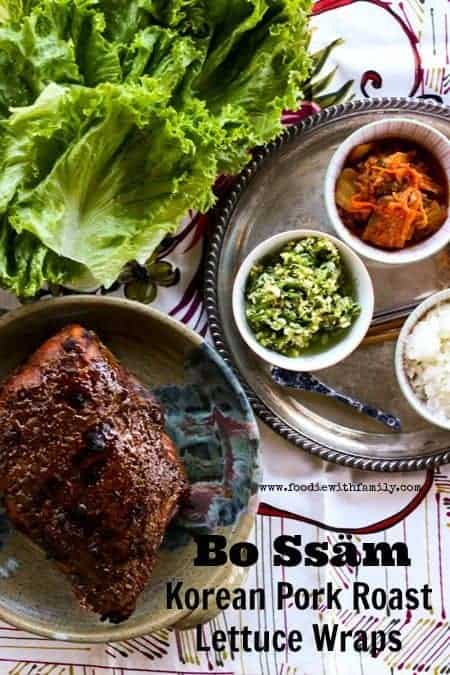 You and I both know that often times -when we want to try whipping up a popular ethnic food- the thing that stands between us and success is finding the dadburned ingredients to make it. Right? Maybe this isn’t so true if you, unlike me, live in a town with more people than cows or cornstalks…

But for those of us who choose to live a little further off the beaten path, our dreams of varied fare can be a little harder to achieve. Today, though, I am bringing you a classic Korean dish that tastes like a million bucks but costs under $20 to make. And wonder of wonders, I don’t even have to drive into the big city to get the ingredients. It starts with three basic ingredients: pork shoulder or butt roast (this may be because I’m the mother of five boys, but every time I say pork butt I giggle just a bit), sugar, and salt. Make that four ingredients. You also need time. I promise this isn’t about to become the “you need aeons and aeons to cook this dish” blog, but this is another one that you have to commit to for time although it requires very little in the way of hands-on time.

I’m just going to come right out and say it: you’re going to need about seven hours altogether to cook this. Break it down with me, though. There is going to be a grand total of about ten minutes- that’s 10 MINUTES!- of hands on time and that time is taken mixing salt and sugar together, rubbing it on the roast, transferring to another pan, mixing more sugar and salt, pouring it over the roast, putting it back in the oven, and taking it back out of the oven. That’s not even a little scary, is it? Granted, there are a few hours between some of those steps, but shoot… you can go do a load of laundry, go to church, go on a hike, take a nap, read a good book, or otherwise try not to chew on everything in your kitchen while it cooks, because

…it smells really, insanely, painfully good. What makes it so ridiculously tempting? The night before you cook it, you rub it in a mixture of kosher salt and raw sugar. While we’re discussing sugar, please spring for the raw sugar here… or sucanat. Either will be good and either will make a heap-big difference in the end product over white sugar. TRUST ME! This sits, covered in plastic wrap, in the roasting pan you’ll be using to cook it the next day.

What kind of pan do I need?

Don’t use some vast, roomy, Thanksgiving turkey sized-roasting pan unless you have one mondo huge pork shoulder or pork butt (teehee). It’s too much, you want your pork butt (snicker) to be all cuddly and snug and tucked into a roasting pan. This may mean using a casserole dish as a roasting pan. That’s okay! The only other real issue you’ll want to consider when contemplating cooking vessels is that it needs to have high enough sides to come most of the way up the roast. Those pork roasts give off a ton of cooking juices and oil.

Can I substitute pork loin or tenderloin for the shoulder or butt roast?

Nope. I mean it. Negatory. Don’t do it. You NEED the fat in this dish. It is crucial. There’s no point in making this if you’re going to try to get away from the fat. You’re indulging. Do it right.

Why is this worth the nearly 7 hours of cooking time?

It’s pretty hard to describe the experience that is Bo Ssäm. I had laid it all out for the photos, and the guys were hovering in the hopes of hoovering quickly. I said, “If you guys want to try a little bit while I put the camera away, we’ll move it all to the table in a minute.” 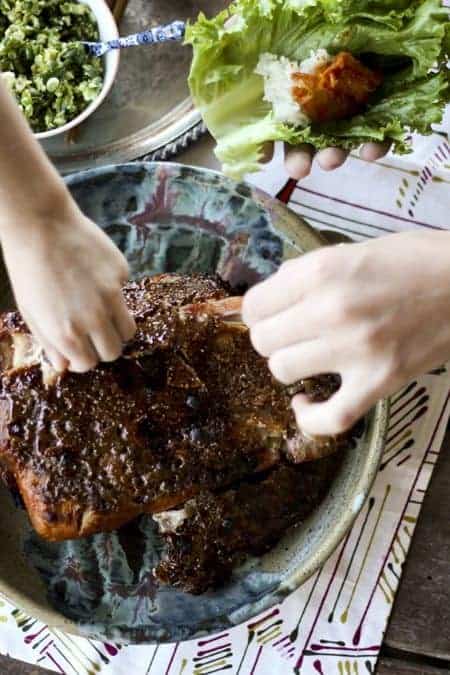 It started with pulling a little bit of the sweet and salty, caramelized, crusty, outer-layer of the pork roast and piling it on a lettuce leaf with some hot, fresh, short-grain rice, a little bit of kimchi (homemade, of course! Future Post Alert!), a spoonful of Ginger Scallion Sauce (recipe included today!), and a squirt of Sriracha straight from the bottle. 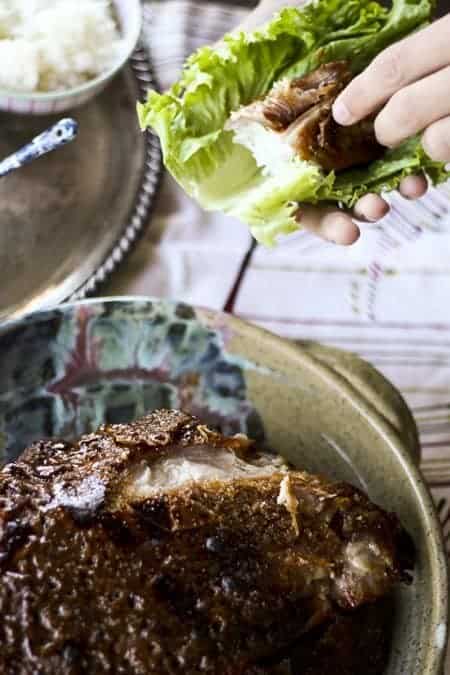 I’m pretty sure my husband looked like one of those crazy Chinese dragons with the wild rolling eyes when he tried it. I rejoined them in the kitchen and my husband shoved a wrap in my hand. I ate it over the counter top. I am telling you that roast never made it off of the counter. We all stood there in the kitchen grabbing, piling, drizzling, and eating. We had juices running down our arms, and perma-grins plastered on our faces. It was a moment we will all remember. When we had all eaten ourselves silly, my husband turned to me and urged, “Make this again. Soon. Please. Often. Can we have this a lot?” The kids all nodded mutely with fervent expressions.

Oh shoot. I DO need to say more. This made it onto the short list for entertaining meals. It’s been requested by two kids for birthday meals, for our annual Super Bowl feast, and -by my husband- to impress my father-in-law.

To read more about the origins of Bo Ssäm, click on through to Wikipedia. 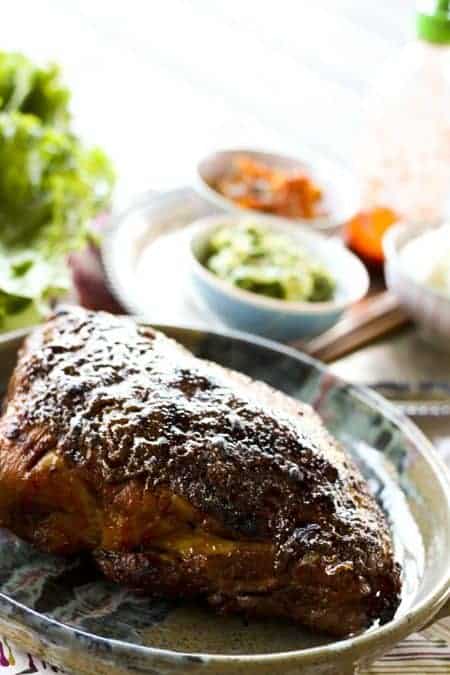 If you taste the roast before resting it and putting that final sugar cap on, you may think you’ve gone dreadfully wrong and created a pork salt-lick rather than a succulent dish. It is salty because that outer layer is what cured in the salt/sugar crust overnight. Don’t worry! Like many Korean meat dishes, it’s pretty salty when eaten alone but the level of saltiness drops dramatically when served with unsalted lettuce leaves, unsalted rice, kimchi, and Ginger Scallion sauce.

Besides this, my hubby insists I inform you that the inner meat -beyond that salty/sweet crust- is quite normal… Add some of the crispy, salty outside to the mild, succulent inside and it’s perfection! It’s brilliant, really, adding the salt to the meat helps preserve it longer and prevents you (theoretically anyway) from overeating it. When paired with everything else it is absolutely, unequivocally perfect. Amen. 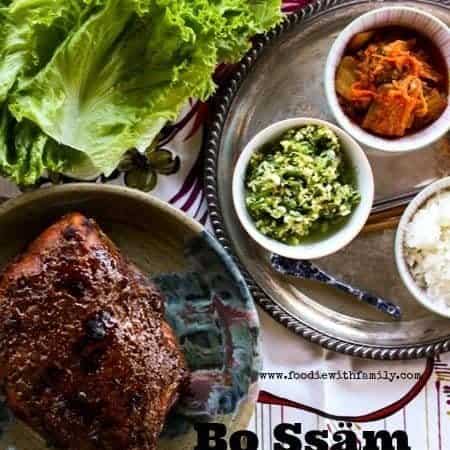 Rate Recipe Rebecca Lindamood
Prevent your screen from going dark
Print Recipe Pin Recipe
There is something unbelievable in taking such simple ingredients and turning them into such a sublime dish; salty, sweet, succulent roast pork with a caramelized crust that's almost like pork candy. Pull hunks of the pork off and serve them on lettuce leaves with hot cooked rice, kimchi, and Ginger Scallion Sauce. It is, in a word, perfection. Gently adapted from and with many thanks to David Chang of Momofuku Ssäm Bar.

For the Bo Ssäm:

For the Ginger Scallion Sauce:

The Night Before Cooking:

To Make the Ginger Scallion Sauce:

To Cook the Bo Ssäm:

About an Hour Before Serving:

*If your pork roast comes with the skin on it (you lucky duck!) use a sharp knife to cut the skin away from the fat layer, leaving the fat intact.