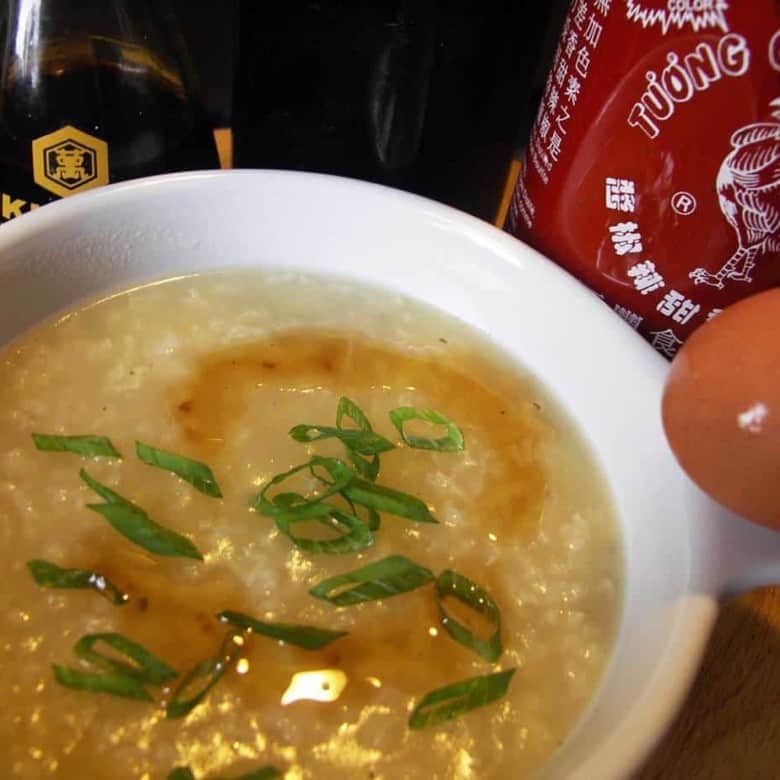 Love this Basic Juk? Check out our other fabulous Korean Food Recipes!

My boys gave me a cold this week. I cannot tell you the joy this gives me. Not because I love slobbering and running from the nose, eyes and every other mucus membrane on my head. I’m just relieved that I got it from them instead of the other way around. That way there is no guilt! And since I was fully healthy to take care of the little shavers when they were under the weather, they got the royal treatment. From cartoons on t.v. to hearing their favorite stories fifty times to their favorite foods they got whatever their little pea-pickin’ hearts desired. So again? No guilt! I was free to feel as punky as I actually did feel. So I read my favorite stories to myself, watched ‘What Not to Wear’ on t.v. and made whatever I wanted to eat. Namely, jook (a.k.a. juk or congee.)  I had made it for the kids, too, but it’s good for what ails you. What can I say?

Tangent alert:  I will clear this up right now. I have no claim to being an expert in the field of jook/juk/congee/lugau/rice porridge. None whatsoever. Crave info on it? See this link. I just know that millions upon millions of people eat some version of it daily and they do it for a multitude of reasons. Among those reasons: It’s simple to prepare. It’s dirt cheap to make. It’s delicious. It’s filling. And it’s really, really hard to screw up. This is a major bonus when you can hardly see through the bleary, cold-addled eyes in your head. Tangent over.

Okay, wait. One more little bit of tangent. I’m probably going to horrify a bunch of traditionalists with this recipe, but I’d like to reiterate that I’m not an expert. I simply know how I like it. Now the tangent is officially, seriously over.

How many of you out there want to slave over a pot of soup when you feel like crud? I don’t see any hands going up. Yeah, I thought so. I don’t either. This is where jook is the king of all soups.

Last tangent today. I promise. Is it a soup? Is it a porridge? It’s both. Depending on the rice/water ratio you use you can push it in either direction. More water? More like soup. More rice? More porridge like…

Jook is traditionally served with all kinds of accompaniments that vary depending on where in Asia you’re eating it. In Korea it might get a side of kimchi. In Japan? Maybe some umeboshi or salmon. In China it could be served with fish or century eggs, among other acoutrements. I, not being bound by tradition, can put whatever the heck appeals to me. And what appealed to me was the way I usually make it; chicken broth and short grain rice simmered until the rice disintigrates topped with green onions, sesame oil and Sriracha and a hard boiled egg. Take that you nasty cold virus!

Make it any old which way you choose. Throw a chicken neck in there and nix the chicken broth if that floats your boat. Got a squirrely tummy? Nix the chicken completely and prepare with just the rice and water and serve it with a drizzle of honey or sprinkling of brown sugar. Feelin crazy? Toss in some minced chile peppers while the rice and water simmer. Make it yours. As long as you keep close to the basic 1 part-rice-to-10-parts-water ratio you can do what you want to make it taste the way you want. Make it for breakfast, lunch or dinner. The best part of this recipe is that it prepares itself in the slow-cooker while you loll about in your flannel jammie pants with a box of tissues and a good book. Isn’t cooking fun?

In the bowl of a large slow-cooker, stir together 1 teaspoon of neutral oil and the short-grain rice until the rice grains are coated. Add the chicken broth (or your desired substitute) and stir to combine. Place the lid on the slow-cooker, turn heat to ‘LOW’ and allow to cook for 8 hours. Just prior to serving, bump the heat up to ‘HIGH’. If you’re using milk, stir it in now. Recover the slow-cooker and allow to cook for 30 minutes. Turn off the cooker, uncover and stir prior to serving.

To eat the Foodie With Family way, drizzle with a little toasted sesame oil and soy sauce, top with sliced green onions, add a few drops of Sriracha and chop a hard-boiled egg into the jook. This may not cure the cold, but it sure makes you feel better!

Back to normal programming tomorrow. If you want to play along here’s what you’ll need:

…Just in case you, like me, live in the middle of nowhere and can’t buy sushi rice at your local mini-grocery, here’s a link to my life-line: Amazon.com. What do these people NOT sell I ask you.