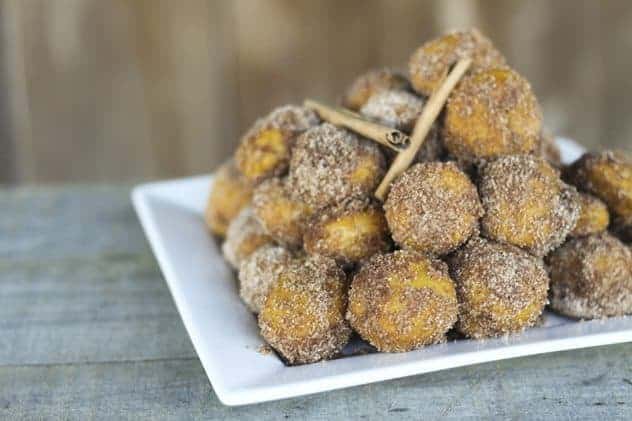 When I promise an all desserts week I mean it. Here’s installment #2!

There are foods that I will beat down the door and jump over an old lady to get. Doughnuts are not usually one of them. I don’t really have much of a sweet tooth (contrary to what you might think considering the number of dessert recipes I’ve posted) and so I spend my “sweet capital” very carefully. Doughnuts, in general, are  too sweet, too gloppy, too much of everything. Just too too.

Every fall, though, I like to try an apple cider doughnut. The name is irresistible isn’t it? You say cider, I drool. And they’re usually okay. Often times they’re baked rather than fried and instead of a gloppy glaze, they have gone for a roll in a bowl of cinnamon sugar. I can manage one or two doughnut holes of the aforementioned variety before I have to back off. For me and doughnuts that equals indulgence.

My kids and husband, however, have never met a doughnut they didn’t inhale. My husband, in fact, calls them DARNITS. As in, “DARNIT! I ate another one!” And so, when I saw this the other day, I decided to try my hand at doughnut/darnit making. Using Food + Words’ recipe as a leaping off point, I leapt.

Being in possession of a great deal of apple molasses is a nice thing. It’s especially helpful when you decide you’re going to morph a pumpkin/beer doughnut recipe into a cider/pumpkin one. I wanted a hint of cider in the doughnuts but not enough to overpower the pumpkin. Can you think of two flavours that scream fall more than cider and pumpkin? I can’t.

I made dough. I rolled it. I cut it. I put it on pans. And then men (both of the little and mature variety) started trickling into the kitchen. “What are you OOOOOH! Mom’s making DOUGHNUTS!” “You’re making what? Oh. OH! When will they be done?” “Wow. Did we really clean that well?” (No. You didn’t. But you all are cute. Consider yourselves lucky.)

I baked. I dunked. I rolled in sugar. The doughnuts that is. I didn’t personally roll in the sugar although after doing a double batch of doughnuts I suppose it’s six of one/half dozen of another. Doughnut humour. Somebody stop me.

I snapped a couple pictures with a child or two hanging off of one leg, another one on my back and my husband and two eldest sons dancing from foot to foot in the background saying, “Is she done yet guys? How many pictures do you have to take?” I took three pictures then stepped away.

That’s what they brought to mind with the speed with which they descended on those doughnuts.

When they sat down for a breather, I hazarded a bite of a doughnut hole. They were good. No. They were great. They were light and just sweet enough. The pretty autumnal orange colour of the crumb delivered on pumpkin flavour with just a hint of apple cider. The nutty brown butter that held the crunchy cinnamon sugar to the outside was the perfect finishing touch. In short? It was a doughnut of which I could eat more than two. Darnit. 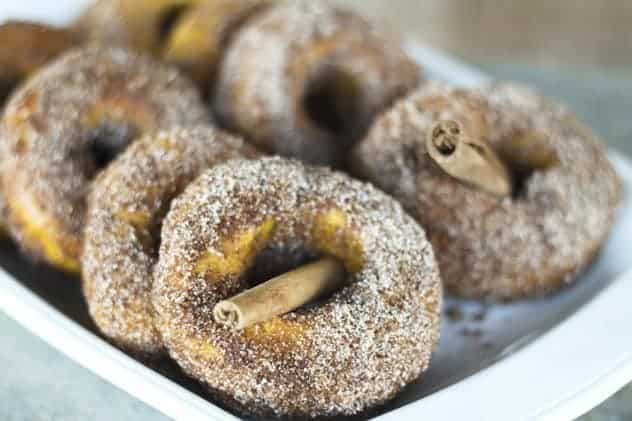 For the Brown Butter:

For the Cinnamon Sugar: