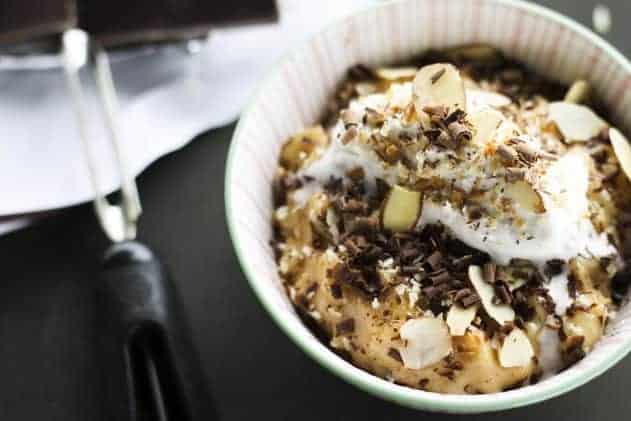 I’m going to be in some very deep trouble for writing this post. I just know it.

As I made this last night -stirred the pot, dipped my finger in and tasted, sniffed the steam- I became increasingly convinced that I was doing something evil. It was my Doctor Frankenstein* moment. I had created a monster. How bad could a dessert be?

*Frahn-kehn-STEEN! Thank you very much.

If I were to tell you that I had created a rice pudding that tasted exactly like a melted Mounds bar, what would you say? *

*Howzabout “Oh sweet mystery of life at last I’ve found you! At last I know the secret of it all!”?

I mean, really, think about it.

Rich, smooth, coconut rice pudding topped with toasted almonds and coconut, shaved dark chocolate and whipped coconut cream… This rice pudding is seriously puttin’ on the Ritz. Are you capable of resisting it? I made double batch of it last night and let’s just say it’s no longer here.

The fact is that the boys and I ate it for breakfast. Then lunch. We’re having it again for dessert tonight. I needed to develop a strategy to deal with this*.

*”We’ve all of us got to behave normal.”

My strategy involved making everyone else eat it so a shortage in the key ingredients would develop and I’d have to cut back our consumption of it by necessity.

Never mind. I can’t do this to you. Don’t make it. Run away. Run far, far away to the land where Mounds Bar Rice Pudding has never existed. Where you’re safe. Where you only eat fruit for dessert. Where you don’t whip the cream from full-fat coconut milk into a frothy topper that could also be dolloped into your hot chocolate or hot lattes or directly onto your tongue.

Wait! Where are you going?… I was going to make espresso! 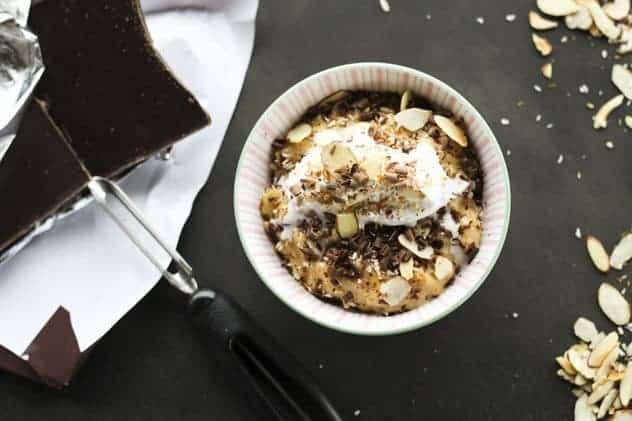 A little serious advice. When you go buy the coconut milk for this recipe, try to avoid the pre-sweetened ones and the low-calorie or lite versions. They just don’t pack the flavour-oomph necessary to deliver the goods here. And if you go whole hog and add the whipped coconut cream, you absolutely, positively need that full-fat coconut milk or the process will fail after the first step. The other sorts cannot deliver the fluffy, creamy texture that the good stuff does.

Don’t cheat and use another kind of rice here. Arborio rice is the sort used in risottos, which makes it spot-on for rice pudding. Creamy, creamy, creamy; that’s what you get with arborio!

One last note: Don’t be scared by the forty or so minute cook time. As long as you walk into the kitchen during the commercials on Jeopardy to stir it once in a while, you’ll have this ready in time for viewing Young Frankenstein,  Psych,  Top Chef, Mad Men or whatever show or movie makes you giddy with anticipation.

Rate Recipe Rebecca Lindamood
Prevent your screen from going dark
Print Recipe Pin Recipe
Coconut cream is unbelievably decadent. When you take into consideration that it is a one-ingredient (at most, two) recipe, it is mind-boggling. Rich, creamy, and smooth as silk, this cream is equally at home topping desserts, hot chocolate, stirred into lattes or just eaten with fruit. Bonus: You can serve this to your vegan, lactose-intolerant friends.

To Serve Warm (my preference):