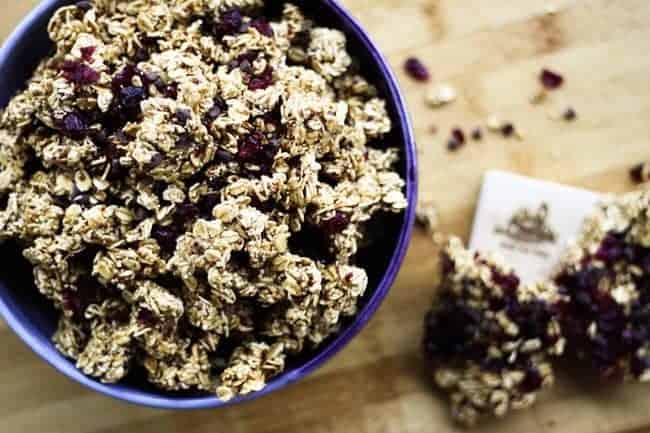 I am more than just a wee bit obsessed with granola.

I eat it on yogurt with fruit almost every day. On the days when I don’t have it on yogurt, I have it, um, on my hands. As in, I eat it by the handful. I especially adore clumpy clusters of granola. While I’ve been making my own granola for years, I recently discovered KIND Cranberry Dark Chocolate Clusters and I couldn’t get enough.

I was hooked on the super crispy, crunchy, just-sweet-enough combo that was studded with tiny little chopped dried cranberries and had little morsels of chocolate adhered to the crunchy bits. My word… who wouldn’t be, I ask you?

I’m not the only one in my family with a thaaaaang for granola, though. Every single one of my guys can plough through it at such a pace that it’s a wonder they ever get more than a few steps away from a toilet.

Oh gosh. That was probably really unappetizing of me to say that. Apologies. It’s what comes of living with six males.

The point is this… my dainty little bags of KIND clusters were disappearing at an alarming rate. I had to do something. I had to make my own.

Thankfully, granola making isn’t rocket science and today’s recipe was not only a fairly simple one to nail down the way I wanted it, but it’s a ridiculously easy recipe to repeat.

In short, you stir stuff together.

Now, there’s a little trick to getting the clumps but it’s not taxing; you firmly press the sticky wet mixture together with a stiff spatula in the form of a rectangle (“Wonder Twin powers activate! Form of… A RECTANGLE! Form of… A SPATULA!”) When you remove the granola to give it a stir, you restrain yourself and -instead- flip the mixture over with the spatula, then press it together again and bake. Then, when the baking is finished, you sprinkle with the chocolate (CHOCOLATE GRANOLA!) and press the little ruby-hued bits of dried cranberry into the whole lot and let it cool before you mess with it again. Ta da! Giant slab-o-granola just waiting to be broken into clumpy bits. What a happy, happy thing to load into jars!

This has an enthusiastic stamp of approval from every single member of my household, INCLUDING the no-fruit duo who -for whatever reason- do not seem to mind tiny minced bits of dried cranberries but would rather stage a dramatic hunger strike than eat a WHOLE dried cranberry. Whatever. If it ain’t broke… 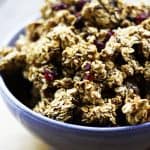 This isn't just any old homemade granola, this is power food! Protein packed by virtue of it's amazing medley of quinoa, millet, amaranth, and rice, this sweet, crunchy Ancient Grains Cranberry Dark Chocolate Granola takes the cake for nutrition AND taste, too. It bakes up nice and clumpy, too, making it an ideal healthy out-of-hand snack! It tastes almost exactly like KIND Cranberry Dark Chocolate Clusters.
Author Rebecca Lindamood

*While you can use any combination of these liquid sweeteners to make your granola, I do recommend using at least half brown rice syrup, honey, or corn syrup for their super sticky qualities. You can make up the rest with maple syrup, agave syrup or Lyle's Golden Syrup, or add up to 1/4 cup of molasses. Any more molasses tends to be a bit too bitter.