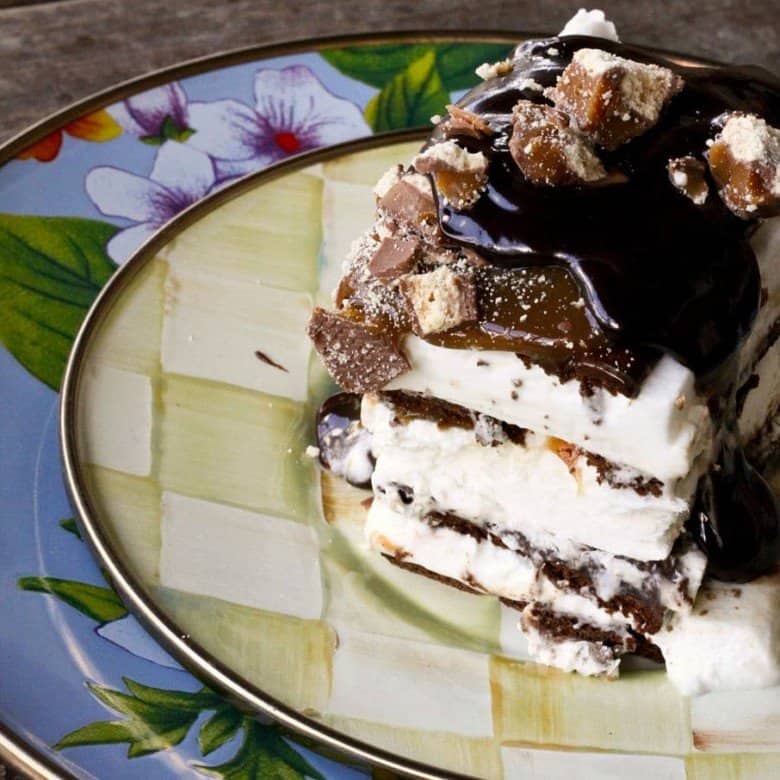 I only have so much virtue in my body. I try to eat well and feed my family healthy foods, and I do a pretty good job of it most of the time. But every so often, I spend all my good behaviour on things like parenting, being honest and moral, and tidying up. At the end of my virtuous rope, I fall straight into recipes like the one I’m sharing today.

You know those recipes you have to drop everything and make right away when you hear or read about them for the first time? This is one of them. I’ll get it right out of the way now and tell you this is full of fat, sugar, flour, cream, candy, chocolate, and all sorts of other things that are dreadful for your waistline. I’m also going to tell you it doesn’t matter and you should run out to get the ingredients right this very instant. …And hey, the recipe comes with a story. Who doesn’t love a story? 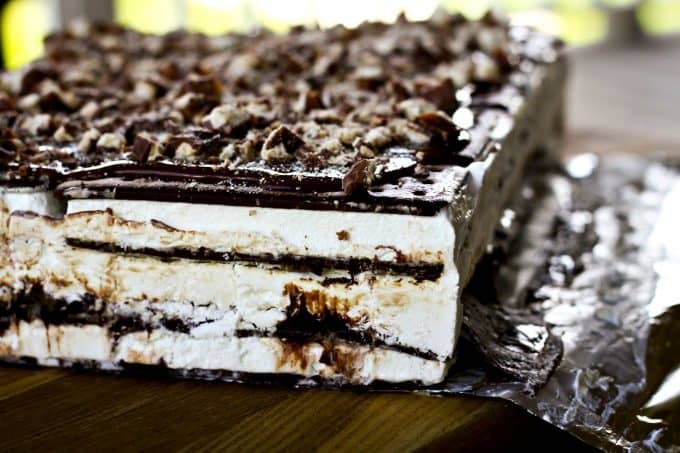 My dad, a summer camp manager, will call me every so often to talk about something delicious he’s heard about or eaten. Yesterday, my dad left me a voicemail that said, “I have to tell you about something that is really decadent. REALLY DECADENT. Call me.”

Well, you KNOW I called my dad. He described a dessert that one of his camp groups had prepared. Yeah, I know… Camp food has a bum reputation, but that’s just with people who haven’t stayed at one of my dad’s camps. He told me that the group had arranged ice cream sandwiches over the bottom of a 9-inch by 13-inch pan, topped it with chocolate sauce, caramel, whipped cream and another layer of ice cream sandwiches.

I went straight to the store.

…But I had a plan to make this decadent dessert just a little more over the top because I tell you I not only had used up all of the day’s quota of virtuous behaviour, but I had started running a deficit. Something needed to be done. Into my cart went two boxes of ice cream sandwiches (no baby sandwiches, no sirree Bob, I went straight for the big gun normal sized ones), a jar of butterscotch caramel, a roll of aluminum foil, a pint of heavy cream, and four king sized Twix bars. I was going to make a Twix Ice Cream Sandwich Cake. What? Yeah. I told ya, I was in the red. I needed something naughty fast.

I went home, lined my 9-inch x 13-inch pan with a cradle of foil (I reasoned this would make it easier to extricate the whole thing en masse when it was frozen) and laid down a layer of ice cream sandwiches. On top of the ice cream sandwiches went a layer of gooey Grandma Val’s Hot Fudge Sauce (store bought would work fine, too, if you prefer). Next came a THICK layer of homemade whipped cream followed by a drizzle of butterscotch caramel and a pulverized king sized Twix bar.*

*Pro Tip from having worked at an ice cream counter in my teen years. Freeze candy bars and they’re easier to break up for topping cakes, including in cookies, milkshakes, and whatnot. 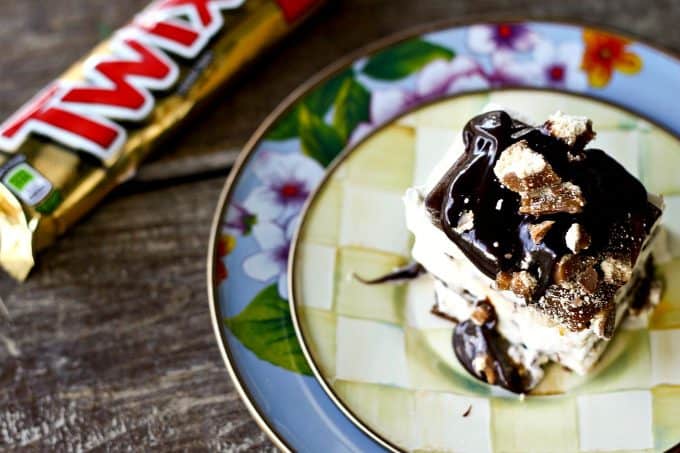 The second box of ice cream sandwiches was arranged over the top and gently pressed down into the whipped cream then smeared with the rest of the butterscotch caramel sauce and two more -COUNT ‘EM TWO!- broken king sized Twix bars. The whole shebang was shoved back into the freezer to firm up for a couple of hours.

The boys and I waited not at all patiently (because they, too, had exhausted all of their good behaviour far earlier in the day) for those couple of hours with forks in hand. When the timer chimed, I pushed my way past them to retrieve our Twix Ice Cream Sandwich Cake from the freezer. I used the foil cradle to lift the cake onto a cutting board and cut the whole thing into mighty generous portions, taking care not to destroy the foil. After removing a corner piece to a plate, I lifted it back into its pan. Each serving got a generous drizzle of Grandma Val’s Hot Fudge Sauce before being devoured.

Can I just say that again? WHOA. That oughta set me up to behave like an angel for a few days at least. If not, I still have a tiny little piece stashed in the back of the freezer in a cottage cheese container.

What? Angels need sustenance, too. 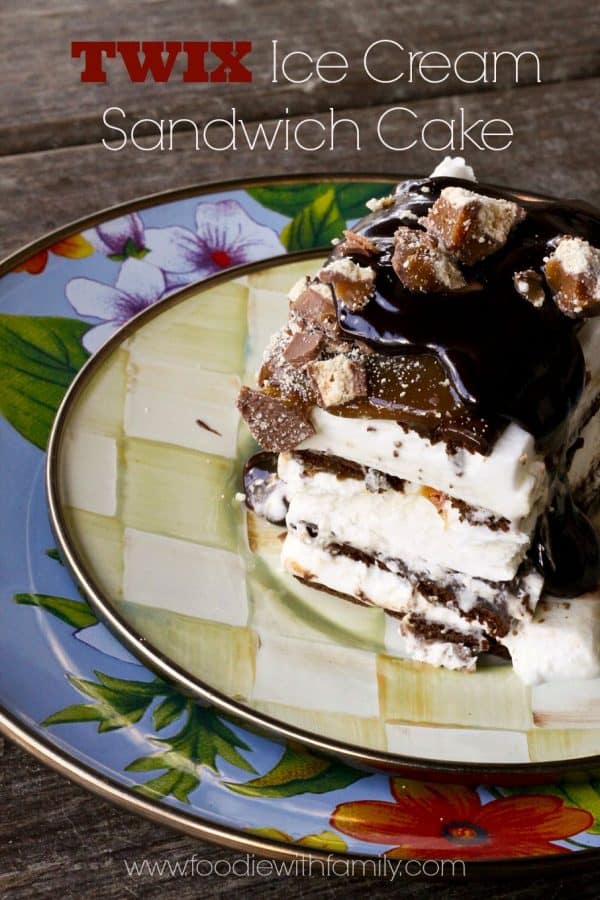 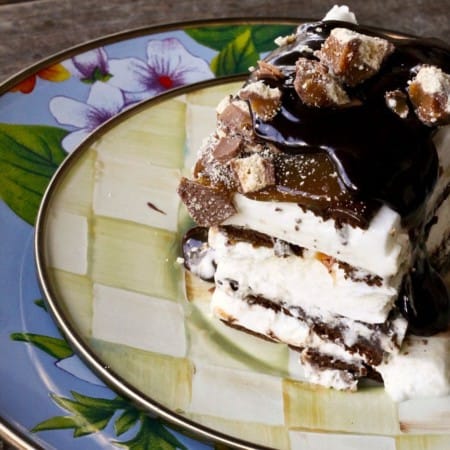