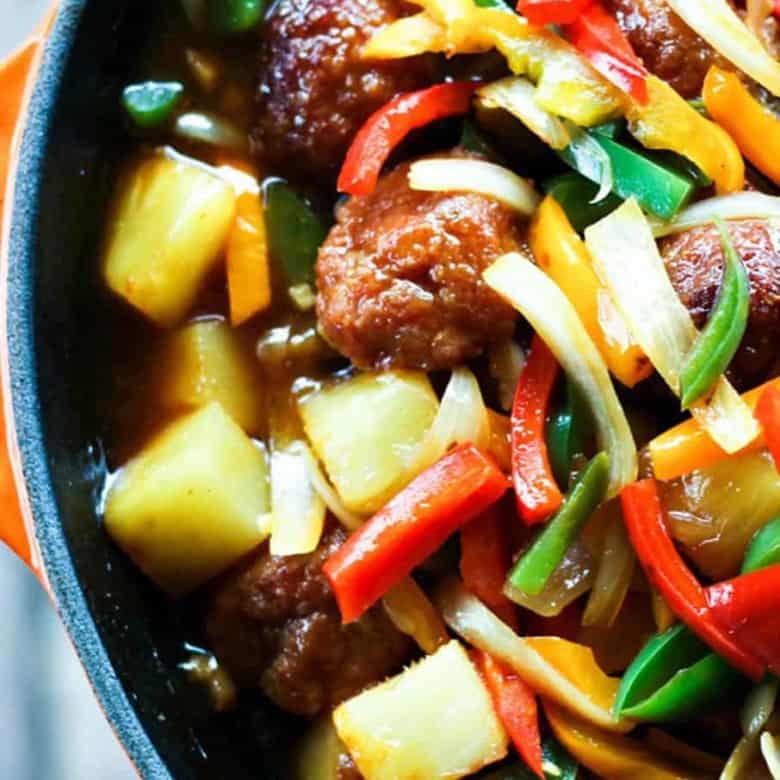 Today’s Make Ahead Mondays recipe for Sweet and Sour Ham Ball Stir-Fry makes use of a recipe for Ham Balls that I shared over four years ago. The recipe by itself remains one of our family’s all-time favourites. It gets a little new life breathed into it in the form of the stir-fry shared below. The ham ball recipe will hook you, but the stir fry recipe will make you love me. Best yet, with a stash of ham balls in the freezer, you’re only about fifteen minutes away from that pot full of deliciousness pictured below. Who loves you? Me! MWAH!

This is one of those meals that reinforces the value of having some meal building blocks stashed in the freezer at all times. I’ve said it before and I’ll say it again, I can’t and/or won’t do once a month cooking. I’m far too fickle and what sounds good the day I put it in the deep freeze sounds abhorrent just days later. Aside from just plain being capricious, once a month cooking tends to rely on casseroles and I’m -while not anti-casserole- not a huge casserole lover. I sometimes think that the freezer is the most misused gadget that lives in every single home.

That meal in the picture above, though? That is Sweet and Sour Ham Ball Stir-Fry and I could eat that six ways from Sunday and that makes great use of the freezer as do many Make Ahead Mondays recipes. Ham balls are fabulous to freezer both because after eating them like a gluttonous pig for Easter Sunday dinner and a couple of days beyond, I’m anxious to stash them beyond my sight so I don’t eat myself ill. Popped into a heavy-duty resealable zipper-top bag with the air squeezed out, they take up very little freezer space and are there waiting for the inevitable day a few weeks later that I once again crave them.

Usually, that craving involves gussying them up a bit as in the case of Sweet and Sour Ham Ball Stir-Fry. I love this dish brimming with the sweet and salty ham balls, crisp-tender rainbow bell peppers and onions, tart pineapple pieces, all enrobed in an Asian-inspired sauce of chicken stock, soy sauce, Sriracha, and sesame oil. This beautiful meal is thrown together faster than it takes the pot of rice or noodles on which you’ll serve it to be done.

I mentioned noodles or rice just a second ago, so I want to address that for a moment. Serve it on whatever you want, obviously, but I’m partial to using rice here because it soaks up all that luscious sauce.

Friends, if you don’t already have post-Easter ham balls stashed in your freezer, I encourage you to whip up a batch toute de suite. If you make a full sized batch (or even a double batch!) you’ll have enough for a big, hearty ham ball meal AND a couple of batches of Sweet and Sour Ham Ball Stir-Fry. I call that a delicious return on your time investment!

The ham balls are already fully cooked, so they don’t need much more than a heat-through to be table ready. In order to keep from having warm ham balls with mushy stir vegetables and pineapple, we cook them separately and combine them at the end. This keeps our meat hot, sauce just-thick-enough, and vegetables crisp-tender… just the way it oughta be.

If you prefer, you can use crushed pineapple, but I like the pieces of pineapple both for texture and for the pick-out-ability for any choosy eaters. 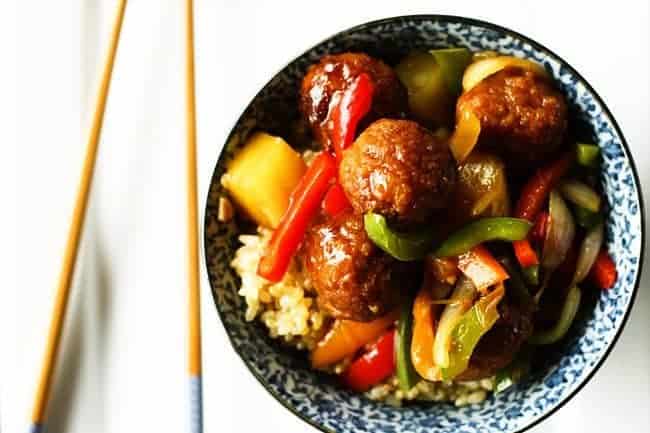 Rate Recipe Rebecca Lindamood
Prep Time 10 mins
Cook Time 10 mins
Total Time 20 mins
Prevent your screen from going dark
Print Recipe Pin Recipe
The whole family loves this dish brimming with the sweet and salty ham balls, crisp-tender rainbow bell peppers and onions, tart pineapple pieces, all enrobed in an Asian-inspired sauce of chicken stock, soy sauce, Sriracha, and sesame oil. This beautiful meal is thrown together faster than it takes the pot of rice or noodles on which you’ll serve it to be done because it makes use of previously cooked ham balls.