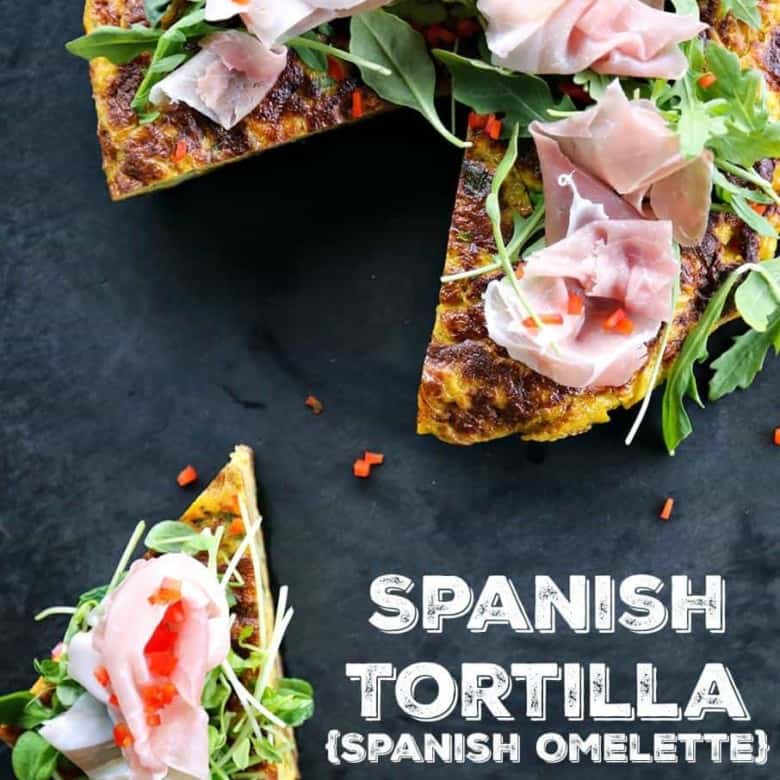 I’m pleased to present this post and recipe that I developed in partnership with Kitchen Fair and their delightful, Made-In-America, non-toxic products. Please visit Kitchen Fair to peruse their top-grade pans.

My little brother, Luke, recently moved into a new place. To celebrate the new digs, I wanted to get him a little something for his kitchen. I showed him the goods on the Kitchen Fair website and asked him to pick one and explain his criteria. His choice was the Expression 10-inch Stainless Steel Fry Pan because of its every day usability. I was pretty thrilled to know that it had a patented, non-toxic PFOA Free, Eterna® Black Galaxy non-stick coating because most non-stick coatings aren’t that well thought out. The pan was so gorgeous when it arrived that I couldn’t resist taking it for a test drive, so to speak. My ultimate test of any non-stick pan is a classic Spanish Tortilla {Spanish Omelette}; that mainstay of tapas bars, Spanish homes, and restaurants. If a pan can turn out good eggs, it’s a pan worth owning. 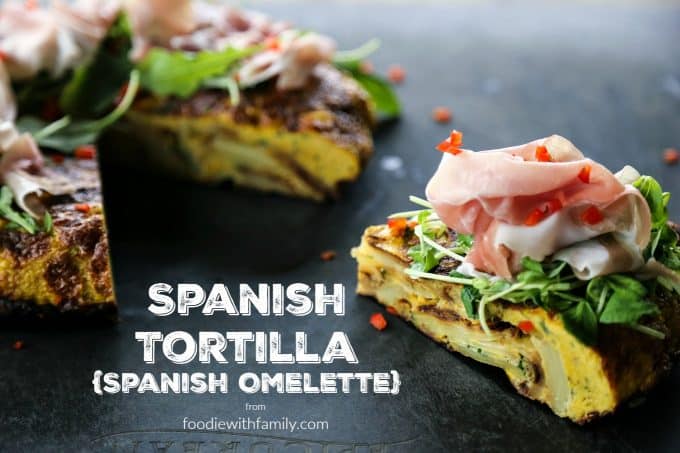 The idea with a Spanish Tortilla {Spanish Omelette} is to gently fry some very thinly sliced potatoes and onions until tender, then toss them with beaten eggs, salt, pepper, etc… and return the works to the pan. It is a simple but perfect combination of eggs, onions, and potatoes. What comes next is not difficult, but might be different than what you’ve done with frittatas or omelettes before; you slide a flexible spatula down along the inside of the pan to lift the cooked egg and allow the still liquid egg to flow underneath it. Rotate around the edge repeating this, tilting the pan gently as needed, until no liquid egg remains. For this reason, you want to be sure to use a frying pan that has a good, thick bottom and ability to retain and disperse heat evenly. When this is accomplished, you slide the partially cooked Spanish Tortilla onto a waiting plate. THIS is where the non-stick coating will show you whether it is good or not. The Kitchen Fair Expression pan rocked the even heat and the non-stick coating tests. 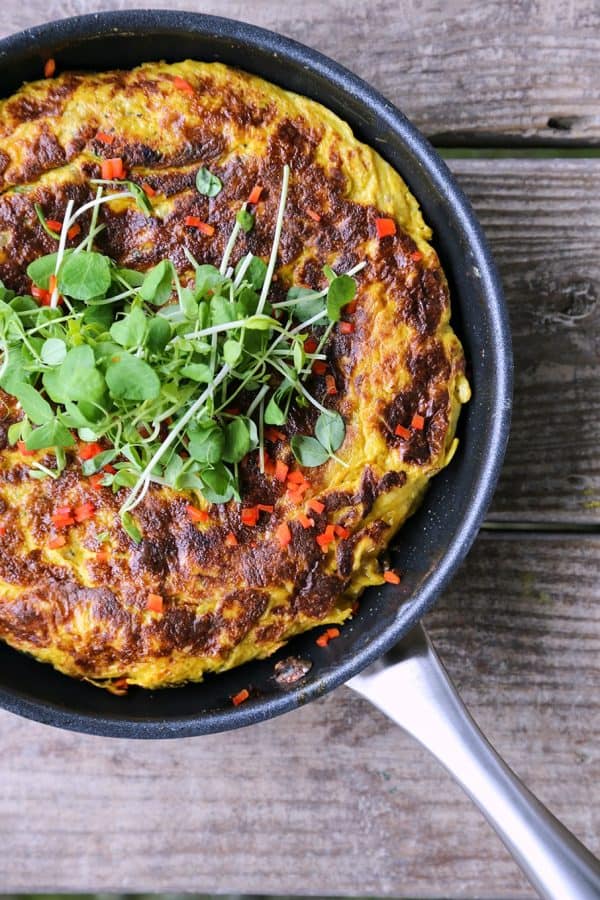 …And the Spanish Tortilla {Spanish Omelette}? Well, shoot. This is a glorious example of simple food being simply wonderful. Substantial amounts of tender potatoes and onions held together by light egg, the Spanish Tortilla is more about those potatoes and onions than it is the egg. The egg is the method by which the yielding potatoes are formed into a finger-food worthy of legend. It can be served hot, warm, or cold and is served plain just as often as it is adorned. I topped today’s Spanish Tortilla with a fistful of arugula, some pea shoots, and some very thinly sliced prosciutto (even though paper thin Iberico ham would be more in keeping with the country of origin), for a seriously simple meal-in-one. 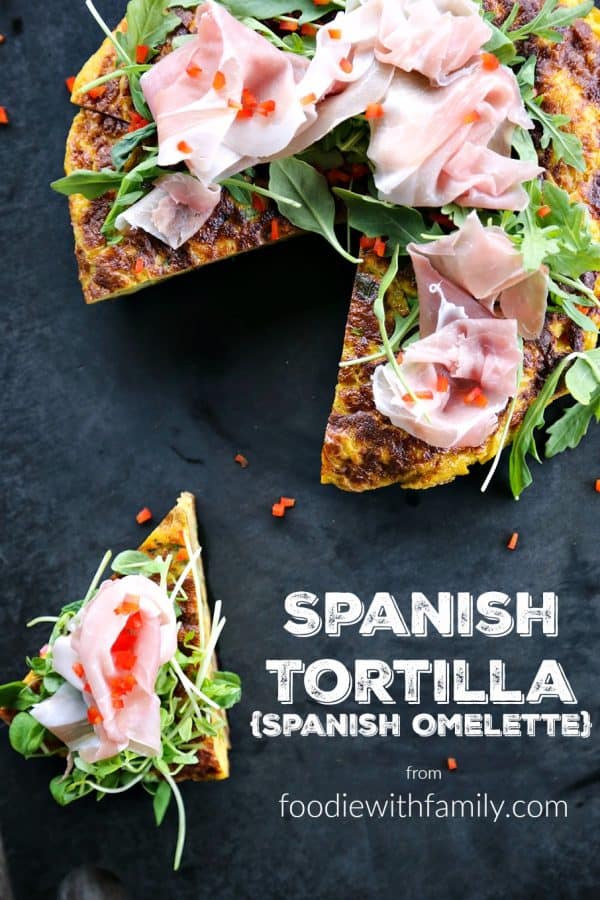 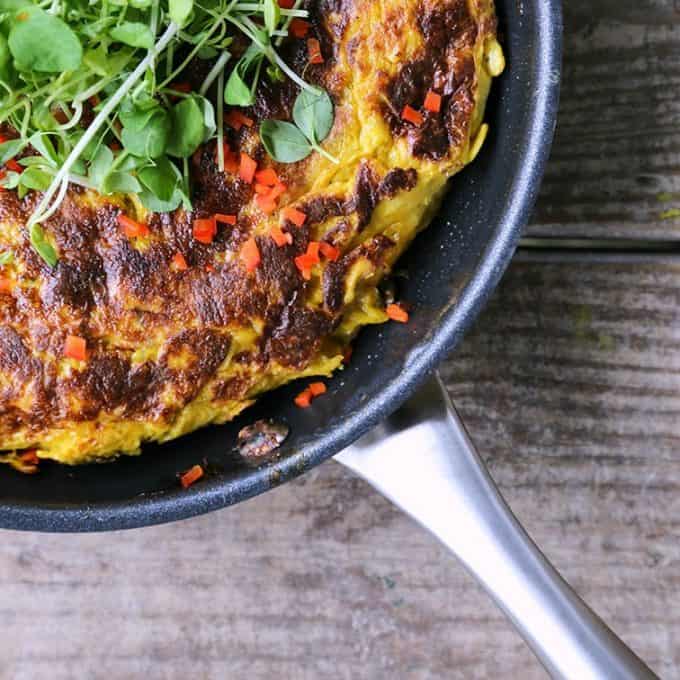 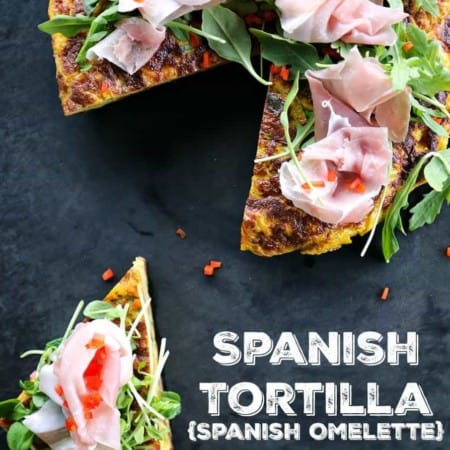 For the Spanish Tortilla: