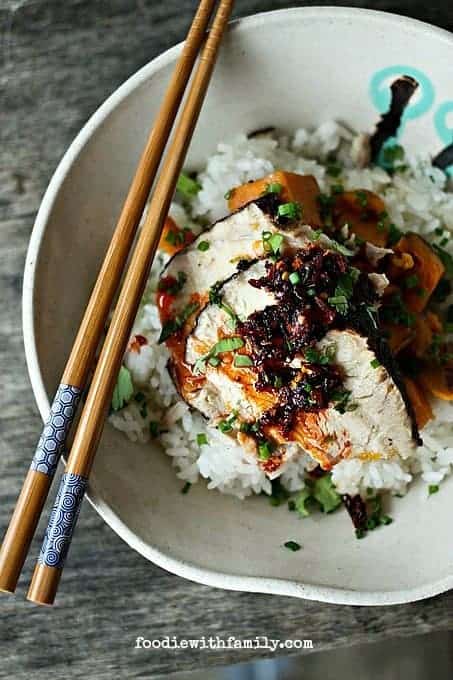 Slow-cookers have acquired a bum rap for turning out bland, homogenous, texturally-lacking food. Why-oh-why do people have this misconception? I want to whisper a little theory because it’s not a very popular one…

I think it’s because people thing you can dump any old thing in there along with a can or two of condensed cream of something soup and it’ll magically turn out a delightful meal. There’s a little more to it than that. Not much, mind you, but a lot of folks balk when you say such a thing.

The truth is that like most other things in life, you get out of it what you put into it. If you start with frozen chicken breasts and a can of cream of mushroom soup, you’re going to get a nice, shreddy, cafeteria style food.

If you start with a fresh pork loin, some chopped sweet potatoes, and a little attention to detail, you’re going to end up with something that is worthy of being served to company. I suppose my life analogy falls apart a bit there, much like boneless, skinless chicken breasts in the slow-cooker. Ba-dum-bum!

The point remains. Fresh foods going into the slow-cooker equal fresh tasting foods coming out of it. There’s a little science to it, too…

Not all fresh foods make it through the slow-cooking process equally. A good rule of thumb is that if it tastes good in something you’d stew, braise, roast, or otherwise cook for a long period of time in anything else, it’ll probably work well in the slow-cooker.

Whether you’re cooking for Sunday dinner, a family get together, or looking to make an average weeknight a little more special, this one-step-beyond-open-and-dump but fifty levels better Slow-Cooker Five Spice Pork Roast will help reduce your time in the kitchen while still turning out impressive and tasty vittles.

Take advantage of the earthiness and depth of flavor of Chinese Five-Spice Powder to give this easy but elegant pork roast a little special something. As the pork loin roasts, the fat and juices baste the sweet potatoes which serve almost as a rack to keep the roast elevated off of the floor of the slow-cooker. This simple trick improves the texture of the slow-cooked pork.

This recipe is geared to take advantage of that budget-friendly cut of pork: Boneless Pork Loin. You can snap up one enormous pork loin when it goes on sale and lob it into meal-sized portions then wrap the portions you won’t use tightly and freeze for future meals.

This recipe comes courtesy of my best friend’s sister-in-law, Robin. Robin is a WIZARD at using small amounts of protein to feed large amounts of people and this is her brainchild. Maybe 2 pounds of meat doesn’t sound like a small amount of meat to you, but for a family of 7, having 2 pounds fill us all up is nothing short of a miracle! Thank you, Robin!

The sweet potatoes serve two purposes here. First, they act as a baking rack. The pork is perched on top of the potatoes as it cooks, making it easier for the air to circulate around the meat.

This, in turn, helps prevent one of the frequent unpleasant side-effects of slow-cooking: sogginess. The fats and juices from the pork baste the sweet potatoes, making them delicious!

Second, the presence of the sweet potatoes makes this quite close to a one-pot meal. A rice-cooker or pot full of rice on the stove and some hot sauce is all that’s needed to complete your meal.

We utterly adore Spicy Chinese Chili Crisp on this dish, but we’ve also loved it with Chili Garlic Sauce or Chinese Black Bean Garlic Sauce. In short… put something spicy on top and it sings!

Looking for a spectacular and spectacularly easy side dish to serve with this pork roast? Try our Rice Noodle Stir Fry! 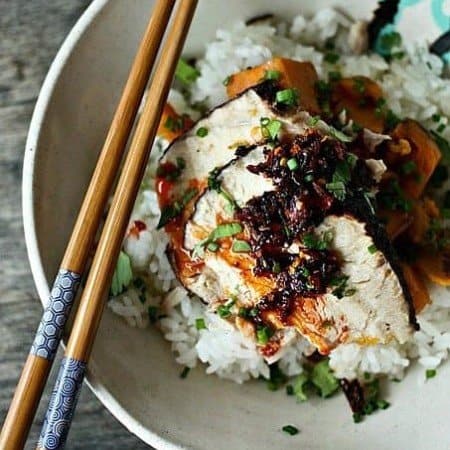 Don’t forget that Not Your Mama’s Canning Book: Modern Canned Goods and What to Make with Them is available for Pre-Order through these fine retailers!