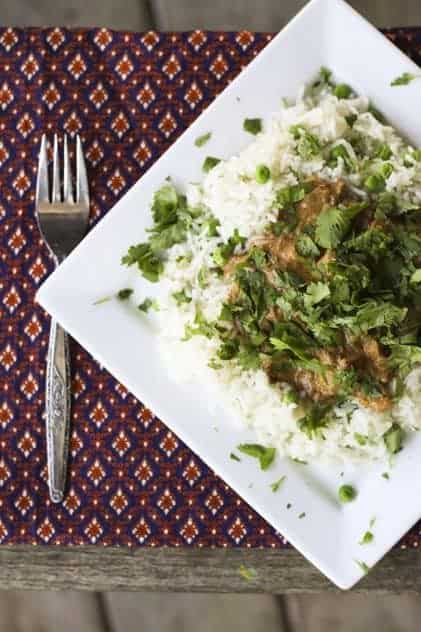 Update with a correction: In the recipe, I accidentally forgot to include the whole jalapeno pepper that I simmered with the sauce. It will be good without it, but it’s great with it. I have modified the recipe to reflect the correction.

This plate of Chicken Tikka Masala (because that’s what it is) represents a giant victory sixteen years in the making. We are talking about a serious case of I-told-you-so mixed with a pretty solid  I-was-right-and-you-were-wrong combined with a decade long desire for Indian food thwarted by… my husband.

I love that man of mine -love him dearly, bigger than the bay and to the ends of the earth- but he has sworn up one wall and down the other for the duration of the time I have known him that he despises Indian food. He has blamed heartburn from the curry (okay, I can buy that), muddy flavours (that I blame on just plain bad take-out food) and unattractive presentation (because my husband is -and I’ll bet you didn’t know this- Frank Bruni, New York Times Food Critic. I’m kidding. He’s Darth Vader. But anyway.)  Like I said, though, I loves ‘im… and you don’t deliberately serve food to your loved ones that will make them unhappy, right?

Then I got a good deal on some chicken thighs and I had a thought. I busted out two slow-cookers. In one, I decided, I would make chicken taco meat: easy, delicious, well-loved by the husband. In the other? I was going to be a wild woman, throw caution to the wind and not only make *GASP* Indian food, but I was going to make my own version of the classic Chicken Tikka Masala. When I live dangerously, whew, I do it up right*.

*Look. I have five kids. At the moment? This is living dangerously. Just go with me on it, please, so I don’t feel pathetic. Tell me I’m crazy. Now.

I browned the yogurt and spice marinated chicken thighs in a saute pan with butter then tossed it into the slow cooker. Next up, I browned the onions, garlic and ginger, and spices, deglazed with the sauce ingredients then scraped those (minus the cream, which was added at the end to prevent curdling) and let it go for a few hours while the taco chicken cooked in a separate cooker. Simmer, simmer, simmer; that’s what the dueling crockpots of chicken did.

When, after a few hours, I stirred the heavy cream into the saucy, fragrant chicken, I was thrilled. It was beautiful, it was delicious, it was done. I tasted it and was *this close* to weeping tears of joy. It wasn’t even close to dinner time yet, but I had wanted to get a jump on the evening. There was no way I was going to wait another minute. I piled a giant amount of rice cooked with peas and butter onto the plate. I ladled an enormous amount of the Chicken Tikka Masala over it, and tossed an industrial-sized fistful of chopped cilantro over the top and snapped a picture.

Then I looked into the camera again to snap another. Something was a bit off… 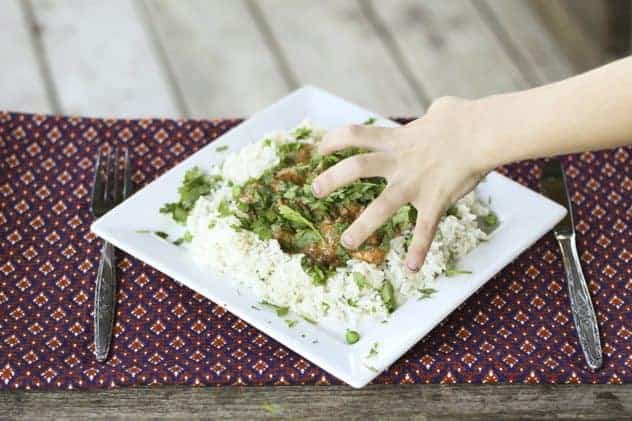 “Hey guys?” I called as I turned around to find three of my sons and one of their friends standing silently at the ready. With forks. “Um, would you guys like to be my guinea pigs?” 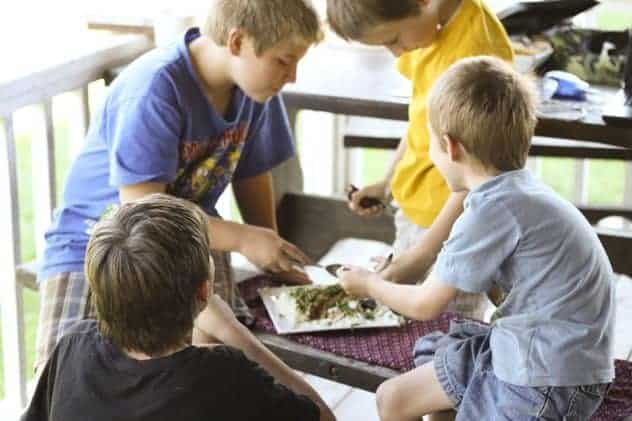 They polished that plate off in short order. They wanted more. My three boys (including one from the no-green-stuff crowd) and their buddy loved it. The buddy asked me to give the recipe to his mom.

That was one obstacle cleared with daylight between me and the hurdle. The big question, however,  remained. What would my Indian cuisine averse beloved think?

I put together the most exquisitely plated dish of Chicken Tikka Masala that I possibly could and stuffed it into his hands while he sat at his computer working on a program. My husband knows better than to question a plate of lovingly offered food whatever the hour may be and he dutifully laid into it.

“If you don’t like it, you don’t have to eat it. I have taco meat going in another slow-cooker.” I disclaimed…

And I’m sorry to say this, but I am fairly certain I smirked. I am an adult, but I am human. I got a hold of myself before I continued,

“Oh sure, honey. Eat up! If you’d like more, there’s plenty.” I walked away happy.

Victory. It tastes sweeter when defeat tastes great, too.

Rate Recipe Rebecca Lindamood
Prep Time 5 mins
Cook Time 15 mins
Total Time 20 mins
Prevent your screen from going dark
Print Recipe Pin Recipe
Buttery rice and peas is comfort food at it's easiest. If you want to serve this with Chicken Tikka Masala and make it most authentic, use white basmati rice. If basmati is not easily available, you can substitute another long-grain white rice so long as it is not quick cooking or instant.

To Cook in a Rice Cooker:

To Cook on the Stove top: