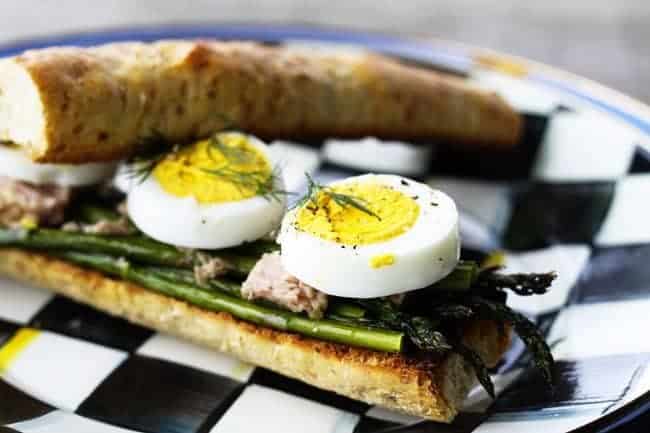 We observe meatless Fridays through Lent. And while that should sound like no biggie, it’s surprisingly difficult for a meat-lovin’ family like ours to commit to one day a week sans meat even if we allow ourselves fish, which we do. For someone who spent nearly seven years as a vegetarian, I’m shockingly lacking in the creativity department when I’ve made a rule for myself.

That’s not to say that vegetarian and seafood dishes don’t ding my chimes. In fact, I kind of obsess over mushroom dishes and seafood on Pinterest. It’s really the rule that trips me up because I deliberately avoid food restrictions in my life. It makes me stop and consider why I have such a hard time giving up things for one little day a week but I think that’s good for me. Isn’t that the point of observing Lent, after all?

Last year, I saw a Spring Sandwich on TheKitchn that sounded like the perfect Lenten Fridays dish, and I pinned it like a good girl then forgot I had pinned it.

A bell went off in my little brain when I admired the bundles of super-thin asparagus at Aldi last week. I grabbed a couple bundles there, then a handful of fresh dill and a Parmesan peppercorn baguette at Wegman’s and congratulated myself all the way home on being clever enough to remember it.

At home, I decided to toast my crusty bread because as much as I love bread, I love it even better when it’s toasted. And here’s the thing, I had decided I wanted to put some olive oil packed tuna on this sandwich to really pile the protein on there and keep my meat-lovin’ tummy satisfied. It seemed like a good idea, so I opened the can of tuna and drizzled a little of the flavour-packed olive oil over the cut bread and brushed it around before toasting it. I’m pretty sure that was the best decision I had made in at least a week… It infused the bread with just a hint of  tuna and crisped the surface beautifully and gave it an undeniably French touch. I’m going to repeat that again and again.

I roasted the asparagus because honestly, asparagus just can’t taste better than that. 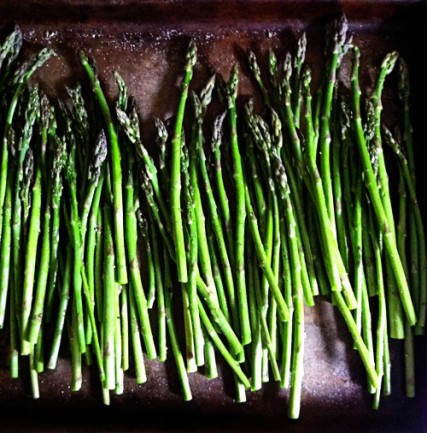 I smeared some of my best grainy mustard on the toasted bread, piled the tender salt-and-pepper asparagus spears on top, flaked the tuna over the asparagus, laid on slices of hardboiled eggs, sprinkled coarse sea salt and cracked black pepper and added a few sprigs of fresh dill before laying that other fabulous piece of toasted baguette over all.

It took a little work eating the sandwich, what with having such a delicate little mouth and all (she says as two whole cookies fall out of her maw) but I managed. It was glorious, I tell you. I ate the entire thing by myself before assembling more for the guys.

It’s my new go-to Lenten recipe… Granted, there are members of the no-visible-veg contingent who feel compelled to pull the asparagus from their sandwiches, but that’s okay by me because I hoover the tender little spears from their plate before they hit the sink.

No asparagus left behind.

I’m curious… do you observe Lent? If so, how do you do it? Meat-free Fridays? Meat-free Fridays and Wednesdays? If you do, what are your favourite recipes for those days? Do you give up something else or have certain activities? 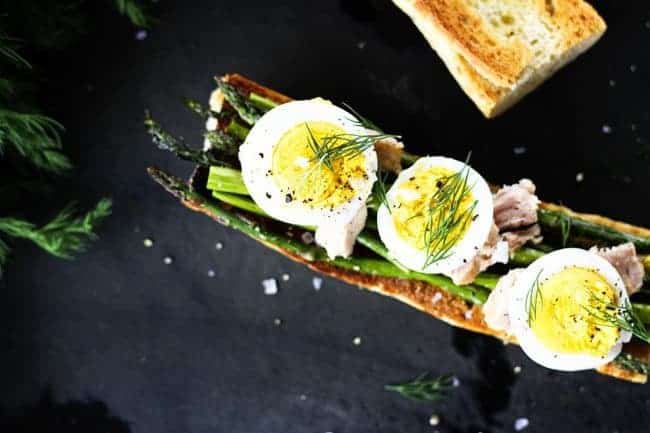 Rate Recipe Rebecca Lindamood
Prevent your screen from going dark
Print Recipe Pin Recipe
This French style sandwich is one of the best ways to fill up without weighing down on your meat-free days: toasted baguette with grainy Dijon mustard, tender roasted asparagus, hard-boiled eggs, olive-oil packed tuna, fresh dill, coarse salt and cracked black pepper. Serve with a nice glass of wine and you have a feast! It can be prepared and refrigerated for up to 24 hours before serving. Inspired by and with thanks to TheKitchn