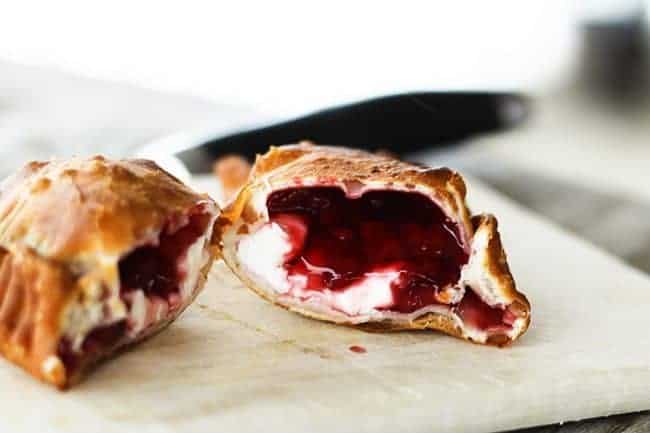 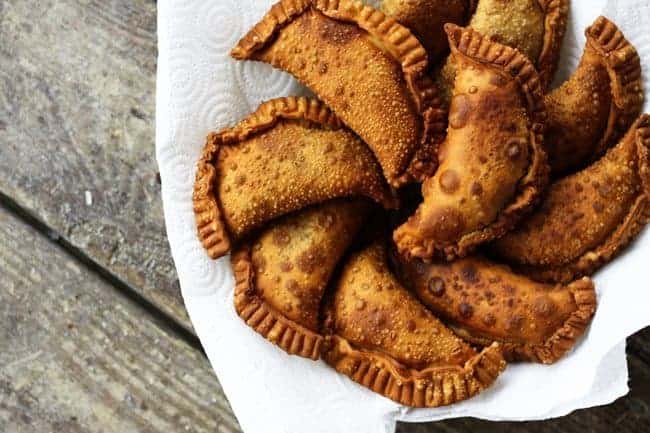 Get the yoga pants out now, folks, because I discovered something very dangerous indeed when I was making empanadas last week. I’ve told you before of my abiding love for Goya Discos and empanadas and that I always keep a stash of those lovely little shortcut pastry rounds in my freezer. How can you go wrong for one-dollar-forty-cents for a package of ten, I ask you? You can’t! If you’re having trouble locating them, ask your local stores to carry them. If they have Goya canned goods, there’s a likelihood that they can get discos for you!

And I did. And they were too good for my good. My husband’s eyes rolled back into his head when he bit into one. Warm raspberry pie filling over melted Neufchatel cream cheese in a deep-fried wrapper just about did the poor guy in for the joy of it all. 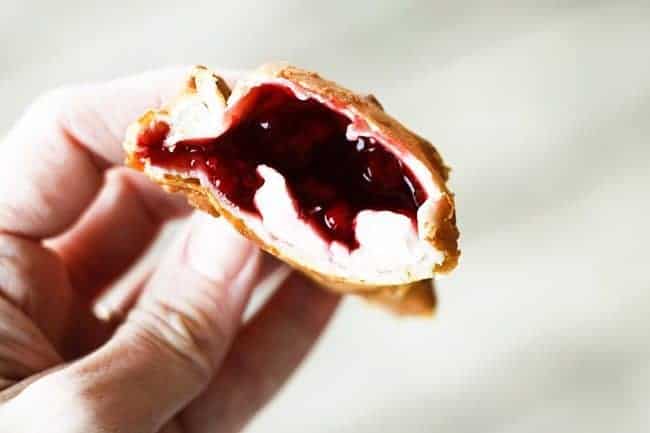 When I tell you these pies can be made as fast as you can slap some cream cheese and raspberry pie filling on a disco, crimp it and drop it in some hot oil, I mean it. I’m a double crimping kind of gal, because I like my filling to stay INSIDE the pastry where I put it. If you’re more sanguine, stick with a single crimp and you’ll have pie a few seconds faster.

I have a little trick for you to keep pie filling from squirting out the sides of the discos when you fold them. After you put the cream cheese just off center on the pastry and dollop the pie filling over it, bring the opposite sides together to fold it in half, but lift it off of the counter as you do it so that you’re holding it by the center edge that you’re pinching together, before continuing to crimp it, immediately pinch both ends shut to keep the filling from leaking out. Then, still holding it up in the air by that center edge, work your way around the seam, squeezing the pastry edges together to seal them. THEN lay it down on its side and crimp with a fork. Here’s where my Anal-Retentive Chef tendencies come through. After that first crimp, I usually fold the edges back toward the center and crimp again with a fork. Ta da!

It probably goes without saying that these taste best when warm. In the interest of scientific inquiry, though, we ate a few of them room temperature and also cold and they were still darned good. In order, we preferred them warm, then room temperature, then cold, but we wouldn’t say no to any of them if offered.

Were you to top a warm pie with a scoop of ice cream, you’d probably swoon. Alas, I will not do this at least until April because I gave up ice cream for Lent. Could someone maybe give that a try and tell me about it so that I can live vicariously?

Rate Recipe Rebecca Lindamood
Prevent your screen from going dark
Print Recipe Pin Recipe
There's nothing more dangerous than these pies that are done in the blink of an eye and stuffed with tart, sweet raspberry pie filling over melted Neufchatel cream cheese in a blistery, crispy yet tender fried package.

*If you find that the pies are getting dark before the cheese has melted inside the pie, lower the temperature of your oil slightly. The goal is for the pies to be a rich brown on the outside with melted cheese and hot filling on the inside.

This post was NOT sponsored by Goya. They have no idea who I am, I just really dig their discos!